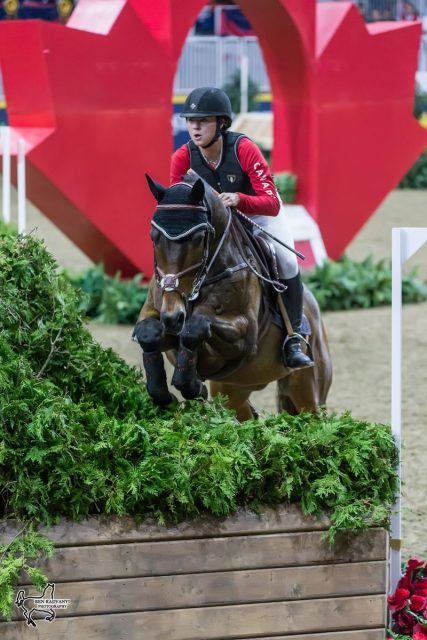 Rachel McDonough cut valuable seconds off the clock by taking a tricky inside turn through a narrow space between two jumps to grab the lead on the first night of the $20,000 Horseware Indoor Eventing Challenge at the Royal Agricultural Winter Fair in Toronto, Canada.
Twenty-five-year-old Rachel, originally from Toronto but now based in The Plains, Va., is happy to be back home for what she regards as a little holiday to contest for the $6,000 in prize money that the winner will take home.
She credits her 18-year-old Thoroughbred Irish Rhythm, her partner for the last 12 years, with the speed and balance to make those tight turns possible. Rachel knows that at the final tomorrow night the pressure will be on as everyone will have had a chance to re-evaluate their battle plans.
Captain Mark Phillips’ clever course is designed to reward the bold horse and rider team who can simultaneously ride forward for speed, in control for tidy turns and careful enough to leave the rails in the cups all while the noise of the crowd fills their ears. This Indoor Eventing course is an exciting mix of colorful eventing type jumps featuring narrow corners, a keyhole, brush, a bank with a drop as well as some show jumping rails and oxers. 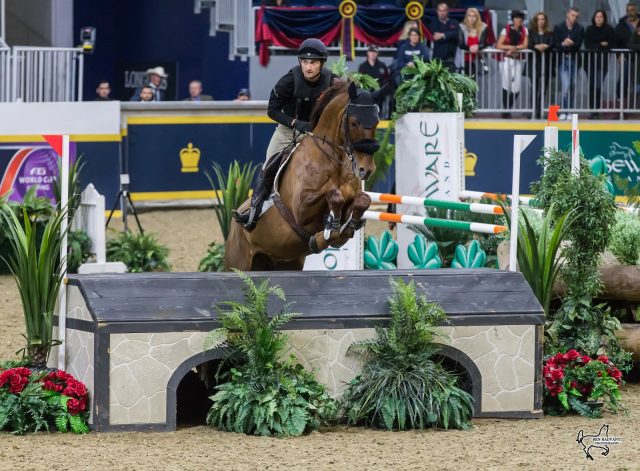 The Indoor Eventing Challenge was the first event of an action packed first night of the Royal Winter Fair and Horse Show, the largest combined agricultural and equestrian fair in the world.  The early start meant that the stands were not at full capacity but the enthusiastic crowd, any of whom bought their tickets especially because of the Horseware Eventing Challenge, roared their approval and were loud in their appreciation of all the riders.

The evening got off to a thrilling start as Elise Saunders sang the song “Rise” inspired by the incredible story of Jessica Phoenix who overcame many challenges to become a member of Canada’s successful World Equestrian Games, Pan American Games and Olympic Games teams.

Brendon McMechan, new on the Indoor Eventing scene, rode his own Oscar’s Wild to third place 9.91 seconds behind Jessica and a full 14.02 seconds behind Rachel. McMechan’s feat is all the more surprising because unlike all the other riders in this ten-team field, he is not a full time equestrian. McMechan is a chiropractor and credits Gwen and Kendal Lehari, with whom he and Oscar’s Wild train, with making it possible for him to both ride and work. 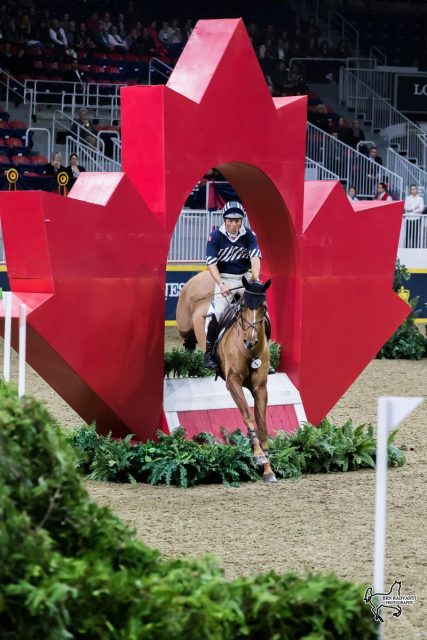 Boyd Martin is this year’s international celebrity guest rider and another crowd favorite. An excited trill ran through the audience, and the three young ladies seated behind me nearly dropped their popcorn as Boyd rode into the arena riding Kyra. Boyd and the chestnut mare finished second at the Rolex Central Park U.S Open $50,000 Arena Eventing in September.

Boyd gave Christine Turner’s 10-year-old Canadian Warmblood a good long look at the course while the announcer made the pair’s introductions over the loud speaker. An unfortunate rail on the very last fence, an show jumping oxer, made the crowd groan as Martin’s blazing fast round added 5 penalty points to his total going into the second round tomorrow.

All the other riders are still “in it to win it” going into tonight’s second round. Waylon Roberts, 8-time winner of this event, had an uncharacteristically slow round and a 5 point penalty. He and his long-time partner Lancaster, a 10-year-old Canadian Sport Horse owned by John and Michelle Koppin, are sitting in sixth place behind Holly Jacks-Smither, the night’s trail blazer, and her 12-year-old Thoroughbred More Inspiration.

Roberts is just ahead of Dasha Ivandaeva and Autorytet, her 15-year-old Polish Warmblood/Thoroughbred gelding with whom she competes at the Advanced level. 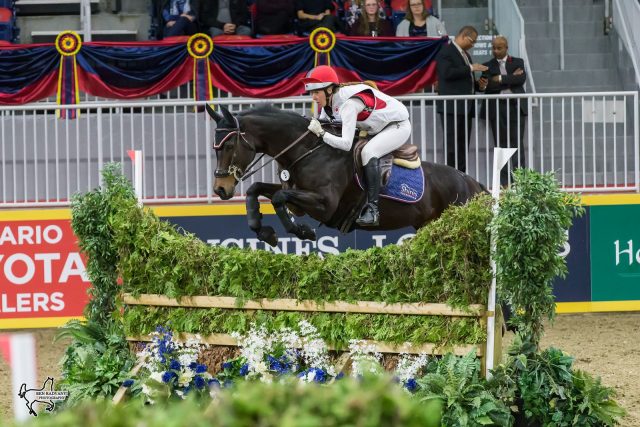 Selena O’Hanlon, first Canadian winner of the most recent running of the extremely challenging Dutta Corp. Fair Hill International CCI3* on John and Judy Rumble’s fantastic Foxwood High, rode Uptown Girl in this first round at the Royal into eighth place.

Scores are so close in this event that Uptown Girl, a 13-year-old Hanoverian mare owned by Linnea Given, cannot be counted out. Jessica Phoenix confided to me before the evening began that she picked Selena for the winner’s circle, so anything may happen on the second night.

Kendal Lehari rode the Dutch Warmblood mare R.F. D’Orabalia, owned by the Syndicate of the same name, rode like a sports car zooming around the turns and thrilling the crowd. They had an unfortunate stop on the top of the bank to add 10 penalties to her score.

Colleen Loach from Sherbrooke, Quebec and a member of the 2015 Pan American Games and 2016 Rio Olympic teams was unlucky enough to miss the start timers at the beginning of the round and so were eliminated. This was doubly unfortunate as she and Brook Massie’s Thoroughbred mare, Serendipity, turned on the speed early and put in a great round. They will be out for redemption the second time around.

Rachel McDonough and Irish Rhythm will be ready for them. McDonough will be ready to amp up to defend their first night first place finish against the pack baying at their heels. 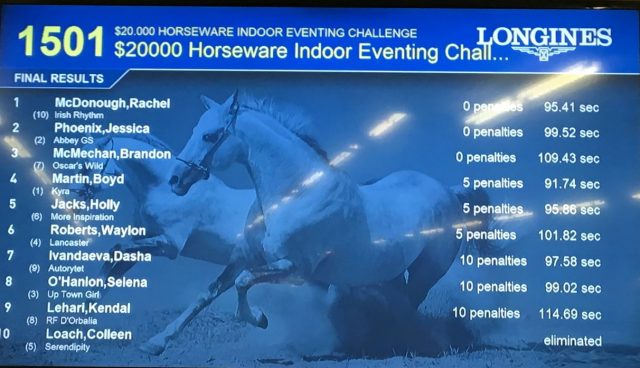