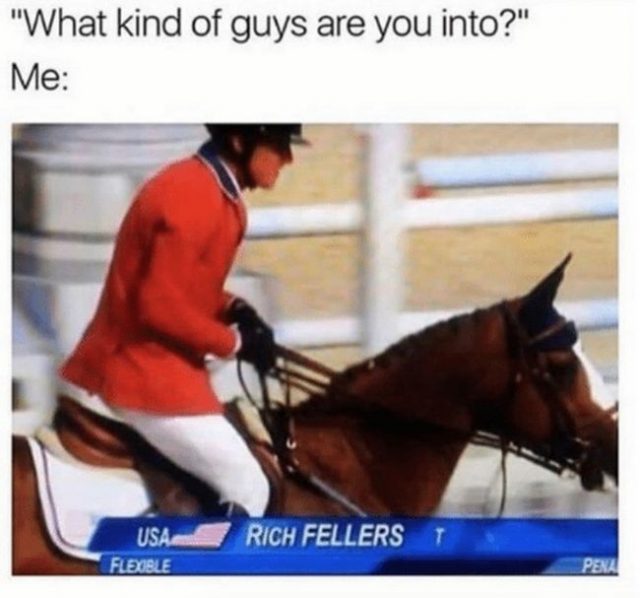 One of my favorite things when I’m watching a TV show or movie, reading a book, or listening to music is the sometimes random occurrence of a horse. Now, I’m not talking about Mr. Ed, War Horse, The Saddle Club TV show, or one of numerous equine-focused book series. I’m talking about the random pop-up of equines in otherwise-unrelated pop culture.

Usually these instances of random equine stories are a romantic horse and carriage ride and/or a horse poop joke. Yet, there are some pieces of pop culture that feature our favorite animal in utterly odd ways.

Bojack Horseman is a Netflix, animated, dark comedy about an aging sitcom star, who is an anthropomorphized horse. His hit show in the ’90s was Horsin’ Around, a Full House-esque show about a horseman who adopts three orphans … shenanigans ensue. As this review of Horsin’ Around illustrates, there’s nothing this show likes better than puns. 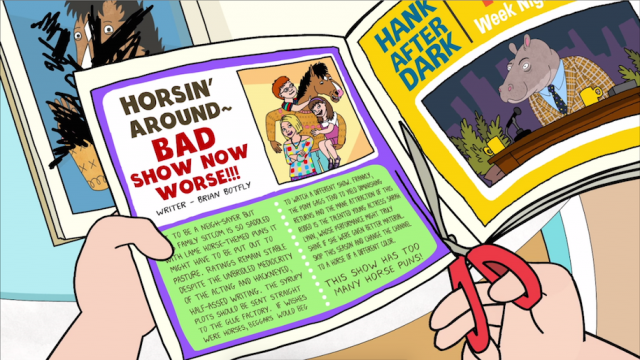 “Not to be a neigh-sayer but this family sitcom is so saddled with lame horse-themed puns it might have to be put out to pasture. Ratings remain stable despite the unbridled mediocrity of the acting and hackneyed, half-assed writing. The syrupy plots should be sent straight to the glue factory. If wishes were horses, beggars would beg to watch a different show. Frankly the pony gags tend to yield diminishing returns and the mane attraction of this rodeo is the talented young actress Sarah Lynn, who performance might shine if she were given better material. Skip this season and change the channel to a horse of a different color.”

In a recent season 5 episode, “Bojack the Feminist,” Bojack is going along with a PR strategy for his new show that includes being a ‘male feminist’ wearing a shirt with the slogan “Feminism is Bay” [here’s a primer on the bae meme, for anyone who is behind the internet times]. 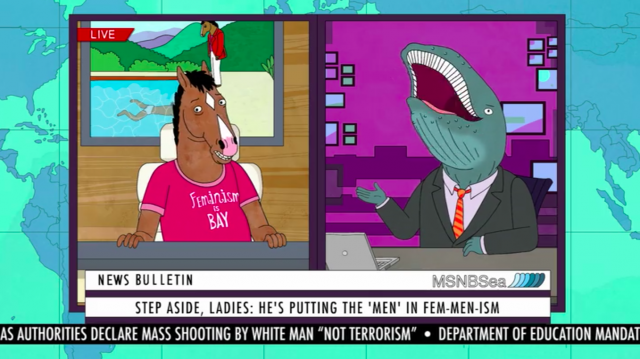 For being a show that’s literally about a horse, his equine nature doesn’t come up very often. However, there is a whole subplot about him being cast as the eponymous role in the Secretariat biopic. 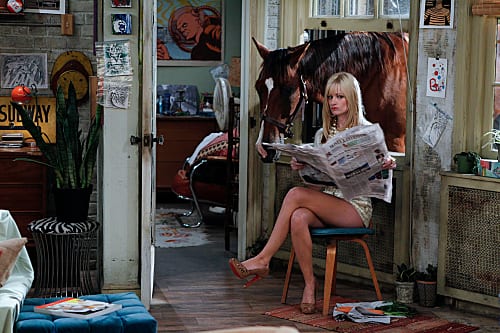 Bringing up another bay that should be a chestnut … there is a horse character in the CBS sitcom 2 Broke Girls. The premise of the show is obvious in the title. One of the broke girls used to be a rich Manhattan socialite, so obviously she had a horse: a champion jumper named Chestnut (yes, even though he’s bay). 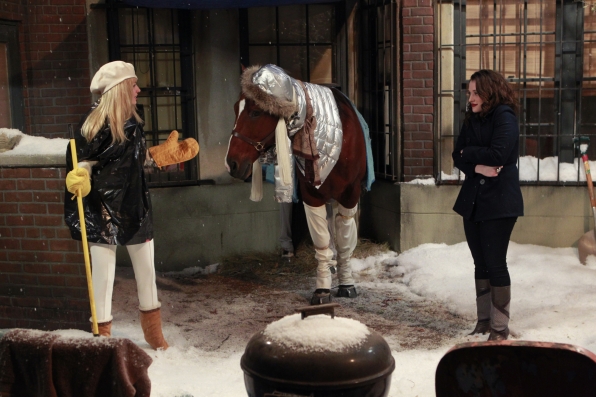 Chestnut lives in the middle of Brooklyn, in an apartment courtyard, no matter the weather. The plausibility of the storyline aside (Where does all the manure go? Who is their hay provider? Does he need wormer in the city?), the broke girls love Chestnut and end up finding a more responsible living situation for him later in the series.

Over the years there were a few equine stories on Full House, but who could forget the finale episode. For those who weren’t children in the ’90s. the Full House finale featured the youngest Tanner, Michelle (played alternately by the Olsen twins), falling off her pony in the woods instead of competing in the hunter show with her friend.

Michelle ends up having amnesia from the concussion (don’t worry, in true Full House fashion, she regains her memories and everyone is happy).

It’s a bit of a stretch as far as horse storylines go, however, the episode does portray some of the pressure of a horse show well.

A rule I live by is that any pop-culture list must include Beyoncé. She is the ruling queen of American media and must be treated as such. My personal favorite equine-and-Beyoncé moment is the money shot in her “Who Run the World (Girls)” music video…

A gorgeous, rearing, black Friesian … I mean, what little horse-obsessed kid can’t relate to this image of empowerment.

Honorable mention: Science also named a horsefly after Beyonce because of its “spectacular gold color.” Now I know horseflies are not friends of our actual horses, but they are extremely important pollinators for the environment! 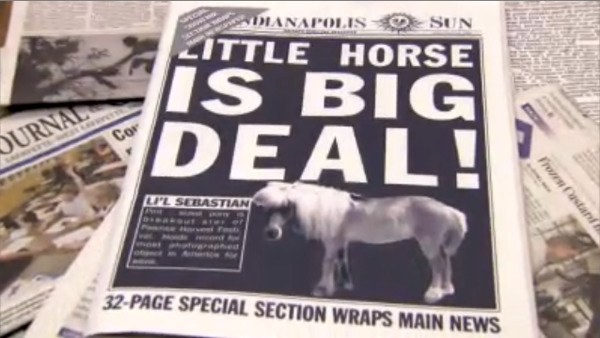 No equine pop culture list would be complete without a mention of Li’l Sebastian. Anyone who has watched the tv show Parks and Recreation will appreciate the grand importance of this miniature horse to the residents of Pawnee, Indiana.

Most of the shows Li’l Sebastian related humor is how everyone absolutely loves him except for the town transplant, Ben Wyatt (played by Adam Scott).

Li’l Sebastian also gets a song written about him by Andy (played by everyone’s favorite dinosaur wrangler, Chris Pratt). 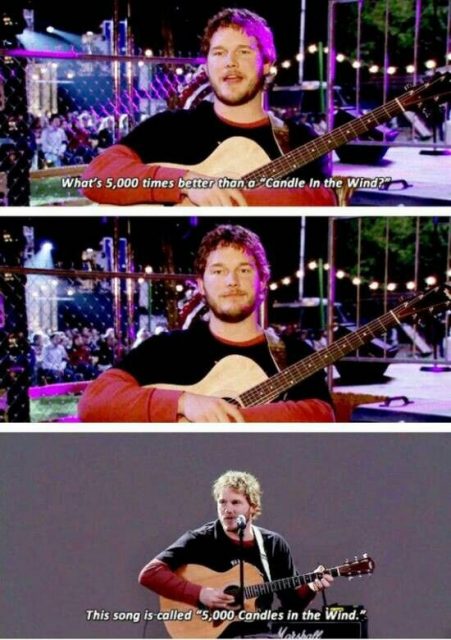 While this is not a comprehensive list, it’s a few of my favorites. Let me know what random equine occurrences I missed and that you love!
Go Eventing.