Athletux rider Angela Grzywinski, who owns and operates Tempus Eventing in Fort Worth, Texas, returned to Waco this winter to compete her Thoroughbred mare Novelle in a $10,000 1.35-meter classic. Read on to see how she did! Thanks to Angela for writing, and thanks for reading. 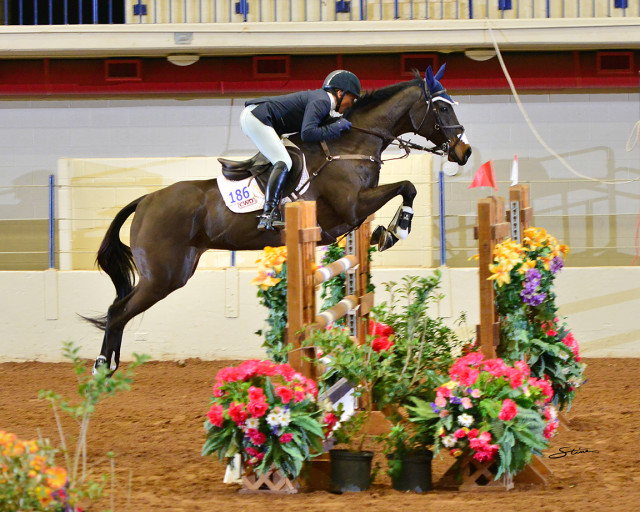 Last year, Novelle and I accomplished my goal of competing in a mini prix at the Winter Warmup Show in Waco, Texas. That class was set at 1.25 meters, and at the time I thought people who jumped bigger than that were crazy. Well, she won that $5,000 and did so quite handily.This year, my student Alyssa Phillips got the same experience finishing fifth in her first attempt at that level on Bliss III. Novelle finished third in the class in just her third jumping effort since, completing Galway Downs CCI3* finishing 10th.I like to give my horses a good break, and Novelle got a full nine weeks barefoot and turned out. She went to the Aquatred to get rid of her Christmas belly while I went away on vacation.I didn’t have any expectations at Waco this year; I just wanted to have a good experience and get Novelle back on form. After her third place finish in the $5,000, I decided it was time to push the envelope and see what she is made of.

Two of my students and Young Rider hopefuls, Barrett Phillips and Anna Honeycutt, were also celebrating their 16th birthday (look out Fort Worth — new drivers!) so I thought it would maybe be a trifecta of a celebration. 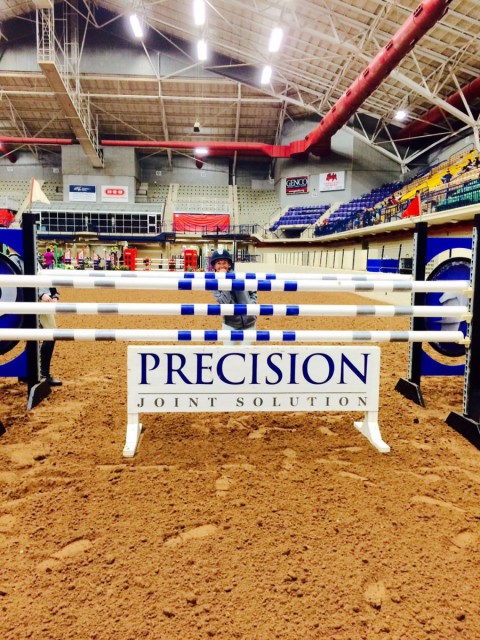 Those are BIG jumps! Photo courtesy of Don Stine.

Somewhat reluctantly, I entered the $10,000 1.35-meter classic. I say reluctantly because not only did I not feel as practiced as I hoped, but also my friends and supporters from hunter/jumper land weren’t there to help me.

That’s been the most fun part of doing the A shows — forging friendships with other equine professionals who are good at a different aspect of our sport. Take my friend Happy Comly; she competes in Grand Prix show jumping and upper level dressage. She has taught me so much; now if I could just get her to come to the dark side …The class was held at 7 p.m. and had 14 horses. As I said, I had no expectations. The jumps were HUGE! But the course was nicely designed. I walked it with a few of my students — trying to put on my bravest face secretly wondering what the heck I was thinking. A tiny little Thoroughbred mare ridden by an eventer … 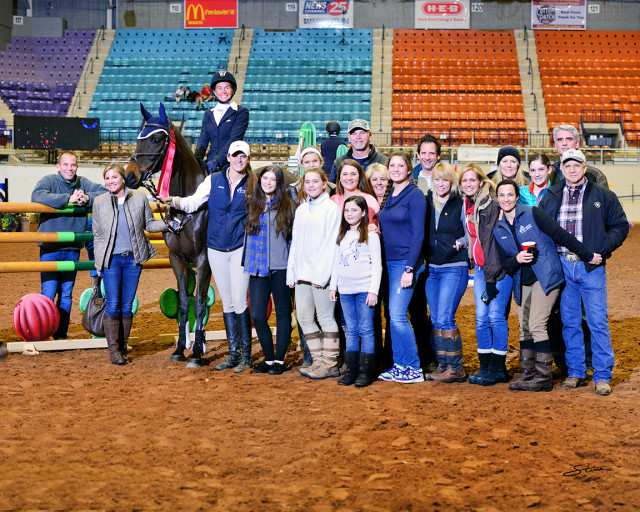 We drew the fourth slot, which I was happy with, as I don’t like to wait around. The first rider went in and jumped a clear round — so it could be done. By the time I went in, she was still the only clear. Novelle and I went in the ring, and, true to form, she pinged around like a fire breathing dragon and jumped an amazing round.

She had one unlucky jump down, but honestly I wouldn’t change a thing about our plan. I settled in to watch the rest, and, by the end of the class, the girl who had gone first  was still the only clear, and, low and behold, I was the fastest four faulter (Thoroughbreds rule!), and we were second! I couldn’t have been more proud.My students all had an amazing week with new heights reached and new goals attained. We are now prepping for the event season, and I am headed to California to begin the long prep season that leads to Rolex. I’m sure hoping the show jumps look much smaller after my experiences.I’m so grateful to my clients and supporters — I by far had the best cheering section — my coaches, my vets, my farriers and all the people who make this possible. I can’t wait for 2015!