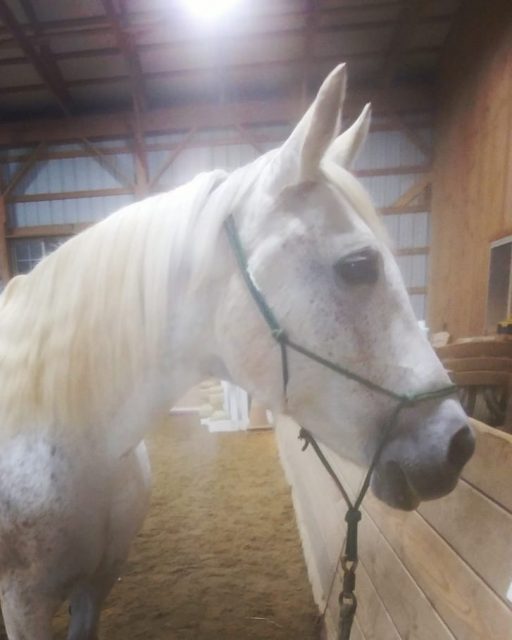 “Are you ready to have fun?”

I greeted the little grey mare at the gate the same way each day. She hadn’t had the best start in life. Living out in a field, with no human interaction, and no vet or farrier care for her first five years. However, she did have food. Lots of food. Her previous owner would dump out a bag of grain each day for each horse. Needless to say, she was fat. I rubbed my hand through her tangled mane and felt her breathe. Then I slipped the halter on and we made our way up to the barn.

Gabby was a half-arab half-andalusian 15-hand mare with lots of spunk. But she was also heartbreakingly timid and when scared, would freeze. I’ve never been the rider with the best relationships with her horses. It pains me to admit it. But they rarely greet me at the gate and, to be honest, I wasn’t sure if they ever looked forward to our rides. I was competitive and intense. Unable to find the line between doing nothing and drilling every exercise in the book.

With Gabby, it had to be different. My goal for her wasn’t to win blue ribbons. I needed to start her under saddle and create a functioning citizen of the horse world. Gabby demanded that it was different. Without a relationship, she would have never progressed. With pinned ears or a wild eye, she would tell me when I wasn’t paying enough attention to her opinion. Hence, the same question every day. I wanted her to have fun. I wanted her to look forward to our rides and understand that we could build a solid relationship based on positivity, not competitive drive.

Because of this, our arena looked a little different. My trainer and I had tarps, balls, and poles laid out every which way. The kiddie pool and pedestal even made the occasional appearance. With the help of some creativity, we were making progress. But I have to admit, there were moments where I doubted our approach. The well-known classical dressage trainer would be working her students in perfect collection on circle after circle. I, on the other hand, would be teaching my whale of a scruffy grey pony how to stand on a pedestal. The trainer’s students asked me several times if she was pregnant.

Despite my doubts, we were making progress. She could walk, trot, and haphazardly canter around the ring. Trail rides were still out of the question, but she wasn’t scared of tarps, or plastic bags, or anything else. We would play games where I would hide treats (low-cal!) around the ring and she would hunt for them. We even started to lose weight as I could work her under saddle more and more.

The first time that I got on her was pure magic. Terrifying and adrenaline-rushing magic, but still one of the highlights of my riding career. After groundwork for two months, I could put our relationship to the test under saddle. I got on her with a bareback pad and my trainer ponied us around the ring. Then she let us loose. My heart was in my mouth. I was so thrilled and excited and terrified. The first ride is a crucial moment in every horse’s life. If I made it a bad experience, she could wind up with even more baggage to work through.

Gabby had to trust me in order to let me ride her around the ring after 9 years of barely any human contact. The fact that she allowed me onto her back spoke volumes about our relationship. After that ride, I felt like I had finally started to accomplish what I always wanted to.

For the first time in my riding career, I felt a true relationship with a horse that wasn’t built on competition or drive. Better yet, she started to come to me in the field. When I first met Gabby, catching her was a production. She was barely halter broke and would run away when she saw you. You had to approach her from the off-side. She would turn her rear end towards you and present you with a lovely visual of her gray tail. This intimidated the crap out of me, at first. But then I discovered that she was asking for bum scratches. Yes, this horse loved to have the base of her tail scratched down. Then and only then, would you be able to catch her.

After some trials and tribulations, she became easier to catch. The day that I called her name and saw her cantering, not walking, but cantering over the hill and towards the gate took my breath away. I felt like jumping for joy. I called my mom, “Gabby came to me today!”

We celebrated together over the phone. It was such a big step for a neglected little pony and filled me with so much joy. 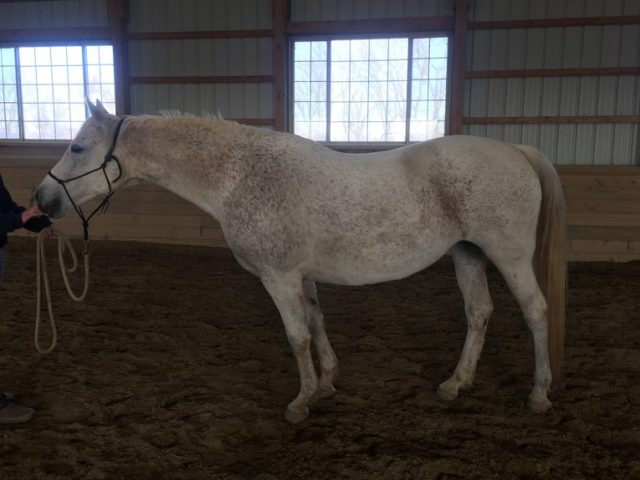 My “have fun” philosophy that was slowly being cultivated with the help of my trainer caught me some flak at the barn. At one point, I was trying to work Gabby through a tarp and kiddie pool combination when I could hear the dressage trainer at the other end of the ring openly discussing my training strategy. “What do you think that kiddie pool is for?” she would say, half-scoffingly to her student. “What is she trying to do?”

It didn’t matter that Gabby was starting to enjoy her hunt for treats and was becoming a little bit braver with the ball. It didn’t matter that working with the kiddie pool would teach her to stand still for the inevitable hoof-soaking that she would need some day. Or that the pedestal taught her where her feet were and helped her stretch out her back. My methods weren’t on the dressage pyramid and therefore, were complete and utter bunk. I gritted my teeth in frustration and tried to ignore her mumblings at the other end of the ring.

It was almost the start of the show season and my competitive drive started to rear its head. My trainer and I discussed entering her in some low level dressage tests or maybe a trail class or two. Gabby and I’s sessions started to take on a little bit more intensity. Then, one rainy snowy night I walked up to Gabby’s paddock and she walked away from me.

That stung. A lot. I was in the middle of second-guessing our planned show season, when I noticed blood dripping down her hind leg. In the cold, dark air, I squinted. She was lame at the walk. My heart caught in my throat. She wasn’t letting me catch her because she was trying to tell me something– she was in pain. The moment I understood, she stopped and looked at me. We walked to the barn together painstakingly slowly.

After a few days of waiting, monitoring, and hoping, the worst was discovered. Gabby had a broken leg. Her cannon bone was fractured and a small piece had chipped off and was floating nearby. My trainer, who was also Gabby’s owner, mentioned euthanasia and my stomach just dropped. To some degree, I understood. Gabby wasn’t earning her any money and was just on field board. She couldn’t be on the stall rest she needed. On the other hand, I loved this little mare but didn’t have the funds or the time to provide her with what she needed.

The vet wanted to forge ahead in spite of our hesitations. If she was quiet enough out in the field, she could have a chance at healing. A month of bandage changes and stifled hopes later, we had some good news. She was healing relatively well, but still had a long road ahead of her. I was happy that she was healing, but I was still worried. My childhood horse had to be retired at the age of 13 after tearing a suspensory. It was so painful for me to give up the future that I saw with him. I couldn’t do it again. I felt helpless. As a college student, I didn’t have the money to buy Gabby and put her on the stall rest the vet recommended. I went to school an hour away, I couldn’t be there everyday to change her bandages and take care of her the way that I wanted to.

In my helplessness, I felt myself withdraw. It would be a stupid financial decision to take on a horse with a broken leg. Gabby and I had built a relationship based on trust and connection. It was so hard to let that go– but I couldn’t torture myself by watching her limp around her turnout paddock and be powerless to help.

Gabby eventually got the stall rest she needed with the help of a small turnout pen and a stall loaned to Gabby’s owner by a kind boarder. But for me, the damage was done. I felt powerless. I couldn’t help her. I had to leave her in the care of her owner and trust that she would continue to heal and wouldn’t be put to sleep. I left the barn and took the lessons that Gabby taught me with me.

Gabby taught me how to be patient, stand up for what I believe in, and most importantly, how to listen to what matters most. Riding isn’t always about the blue ribbon or perfect collection. Sometimes it’s just about that first ride on a scruffy little horse. Sometimes it’s about understanding how love and trust can create a relationship between two wildly different species, between predator and prey. Now, almost two years later, I greet my rescued 3-year-old mare with the same question I greeted Gabby.

Are you ready to have fun?