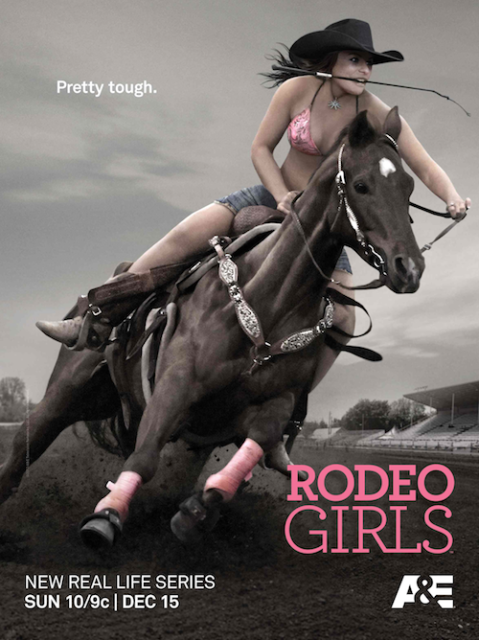 Umm...I think you forgot your helmet! And clothes!

As usually happens at an all girls get together, confessions of one sort or another generally spill out as the wine gets spilled. Being no exception and being at a recent impromptu barn buddies drink fest, albeit a lightweight one, I made a confession: I love to watch Bravo TV!

I’ll admit it – the Real Housewives series is something I indulge in, with the Beverly Hills girls and the recent Ladies of London currently vying for my attention. We have limited TV channels at my house but when someone mentioned another reality series that involved horses, I had to Google it, and I found it – Rodeo Girls!!

Barrel riding is generally not my cup of tea, but hey, what the heck; so I tuned in to those barrel running, long locks flying, money winning rodeo hotties. Yes I did. Once. Well maybe one and a half times…

Doing their pattern and spinning around the barrels and not a wisp of a misplaced hair. I’m guessing they think our smooshed down, hair netted, stick to your skull coiffures are really unattractive – I’ll take helmet hair though over a concussion!

But back to the bra thing – seriously – I need to follow some of their blogs and find out what brand they have on cause there was no flying around with those lady parts! Just lots of bling and, as in any reality TV show, lots of trash talking. Some of those riders deserve kudos though – one is from a 6th generation ranching family, some are balancing college classes and riding, and some are in the throes of a comeback.

And, it was also hard to miss the green stuff being handed out at the end. Unlike our sport, cash payouts are common, but based on their rigs in the background and the silver on their saddles, I’m guessing it doesn’t put much of a dent in the overall bill. However, their horses looked well cared for thanks to the grooms waiting a bit off screen; I saw the nails on those Rodeo gals and they haven’t been picking hooves and detangling tails lately! Rodeo Girls or Rodeo Drive was kinda looking like one and the same – especially once they flashed to someone’s “ranch”. A dry, dusty, tumbleweed place it was not!

This got me to thinking about one of the first reality shows I remember: “Filthy Rich Cattle Drive,” a 2005 production created by none other than Joe Simpson, Jessica Simpson’s father. Surprising that she wasn’t in it, but there were lots of other infamous famous ne’re-do-wells and it had the tag line “Cows don’t care who your daddy is.”

There were five male and five female participants.

Even back then when Filthy Rich Cattle Drive was airing, the standard reality show formula was present: drama and people behaving badly. But of course I decided to check in with Hulu and review a few scenes.

The premise was to put this group of fast lane sophisticates into various situations on a 100 mile cattle drive in Colorado. Given the location of the 6000 acre Saddleback ranch, the scenery was gorgeous – who wouldn’t want to ride through that countryside?

As it turns out, the people on the drive hated it, with lots of arguments and typical wailing about flies landing on suntans and dust and dirt getting in the Gucci cases. I don’t know about you, but two weeks of blue skies, horses, leisurely rides, and camp fire cooked meals sounds fabulous to me. Of course what I was interested in were the horses, how they worked, how they were cared for, the wranglers, and the cows. What well trained, sainted, healthy horses they were.

I have always loved watching cutting horses work at the local fairs, and even with total novices on their backs, those equines knew their jobs. (Note to self: doesn’t that sound like the kind of horse you need?) The head wrangler was a bit too much, in my opinion, and his showing off antics caught up with him and his horse in one episode. I do hope the ASPCA people were there and got after that guy.

Anyhow, the 10 participants were on teams and there were points awarded based on the teams’ accomplishment or failure of particular tasks. The one good thing is that there were two charities that benefitted from all the shenanigans: they raised more than a combined $80,000 for two Colorado children’s charities (Humble Ranch and H-Bar-H). Who says reality TV doesn’t have a purpose?

So what about a reality TV series based on eventing? My research shows me that there was something with the Medal/Maclay riders and Beezie and Frank Madden several years ago. At least a few of the kids featured in that series were genuine riders and continue to compete today. And there were a few mentions of televised happenings at an eventing barn – maybe at the O’Connors? But what about a full blown reality show starring some eventers?

There’s plenty of drama in the event world: from international issues such as Jock Paget, or national debates on horses on or off “the list”, or simple barn based things like that horrible feeling when you realize the horse you have slaved over for months and years is not quite right a week out from a major competition!

We also have pretty nice looking people who are weight and fitness conscious and look good in tight fitting clothes. There are plenty of incredible bodies at events to look at – all those shiny, fit, six pack muscled horses. And don’t forget money – plenty of money being talked about as entries are sent in, vet bills paid, supplements ordered, schooling and lessons paid for, and on and on. We all know that every other line on our bank printout is something horse related!

Eventers also have plenty of bling, sparkly headbands, expensive couture, supple leather, gas guzzling rigs, and sweat. Oh wait, there’s the reality of it all – sweat! Well maybe eventers wouldn’t make such great TV material, but then again, it all depends on your point of view. I know I’d much rather watch something based on eventing rather than alligator killing, duck whistle blowing, wild boar wrestling, etc. shows.

That’s a way to get some money into eventing – start a TV show, get a mass following, launch 100s of off shoot industries, and everyone retire to the swamp! Well, I’d retire someplace else, such as this place! Go eventing!