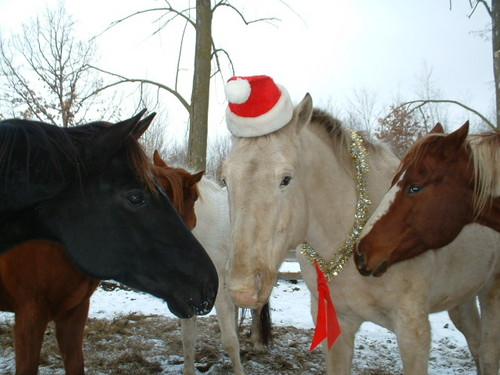 Well, Someone is in the Holiday Spirit!! (Photo courtesy of Nelsons Funny Farm )

Merry Christmas Eve, EN Readers! Or, to be more politically correct, Happy Holiday Eve! (And Happy Fourth Day of Hanukkah!) Whatever your belief system, this coming weekend is certainly a reason to celebrate and enjoy the time with friends, family, and horses. I bring these links to you all from the cozy armchair of my childhood home, basking in the dim, multi-colored glow of obscenely over-decorated Christmas tree. Ah, it’s great to be home!

This time of year brings with it a sense of recollection and nostalgia, particularly if you (like me) are surrounded by the living memories of holidays past. My family moved to the country when I was 8 years old, specifically to nurture my love of horses and animals. During my first Christmas in our new house, my parent surprised me by bringing my pony to live with us in the newly erected barn and paddock. It was like all my dreams came true on that day.

Of course, every rider in that situation knows that what followed was literally years of hard labor to maintain the property, barn, and steadily growing herd of horses in our pastures. Certainly, the idylic illusion of a perfect riding facility faded away. But I don’t think I’ll ever forget how it felt the first time I looked out my bedroom window and saw my pony looking back at me. Even if he was neighing at me to come feed him.

And speaking of memories, Rebecca Farms is celebrating the completion of their tenth year as a competition facility for event riders. In looking to the future, they have announced that Scottish equestrian Ian Stark has been selected to re-design the cross country course. Read more about it here

Curt Pool, of Chronicle of the Horse, shares his observations as an auditor of the George Morris clinic that took place on December 2nd and 3rd at Rich and Shelley Fellers’ Stable in Wilsonville, Oregon.

After numerous complaints about the show jumping footing at the Olympic test in Greenwich, the London Organising Committee of the Olympic Games has responded by testing a new surface earlier this week. Reportedly,, the new footing has received positive feedback and is pending the stamp of approval from the FEI.

Morevan Park’s executive director, Frank Milligan, is leading plans to make the 1,200 acre estate more accessible to the public. Future plans include improved access into and through the property, including trails and roadways to link the mansion grounds with the equestrian center across several fields and various ball field.

Abby Gibbon gives a review of the new feature film, “War Horse,” from the perspective of a rider and horse person. Warning, there are spoilers, but it might help you decide if you want to see the film!

Again, I hope everyone enjoys the time spent amongst friends and family during this holiday season. For now, I leave you all with a lovely video by Saddle Up Productions highlighting Hawley Bennet-Awad’s 2011 winning ride with Gin N’ Juice at Rebecca Farms on July 23, 2011. Go Eventing!