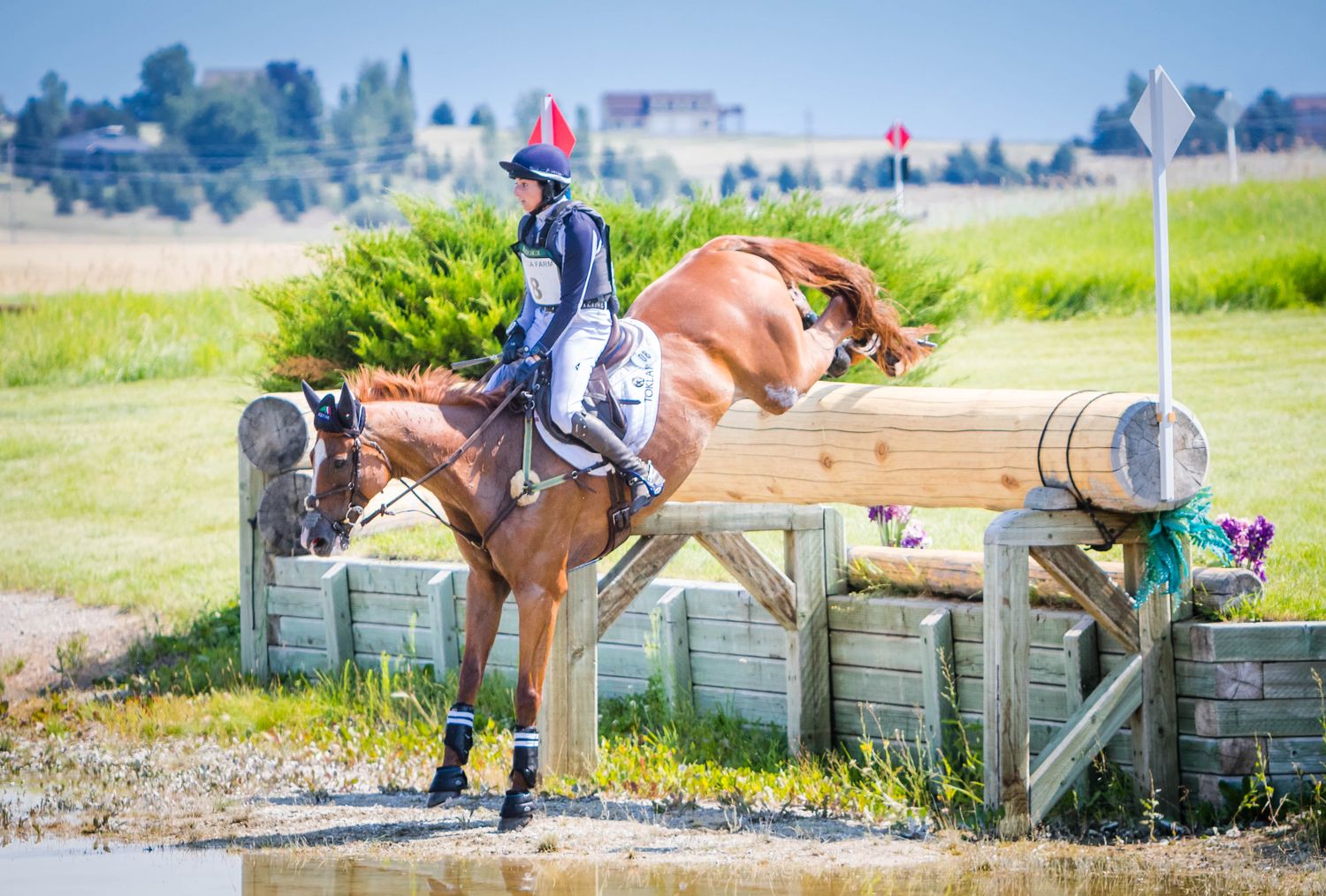 Cross country day for the FEI competitors at Rebecca Farm resulted in big changes in the top three standings in the 4*-L division. The current top three riders all put in impressive double-clear rounds and head into show jumping on Sunday on their dressage scores.

Moving up from fourth to take the lead in the CCI4*-L, Jennie Brannigan and Twilightslastgleam stand on a score of 33.0 going into show jumping on Sunday. “Grampa” is an 11-year-old Thoroughbred owned by Tim and Nina Gardner, who love The Event at Rebecca Farm. Jennie said, “Thoroughbreds try so hard and that horse tries so hard for me … I’m shocked to be leading and I am so happy for today.” Regarding the difficulty of the course, she said “I really had to work today … more than I thought I would. But at the end of the day that’s what a 4*L is all about.” 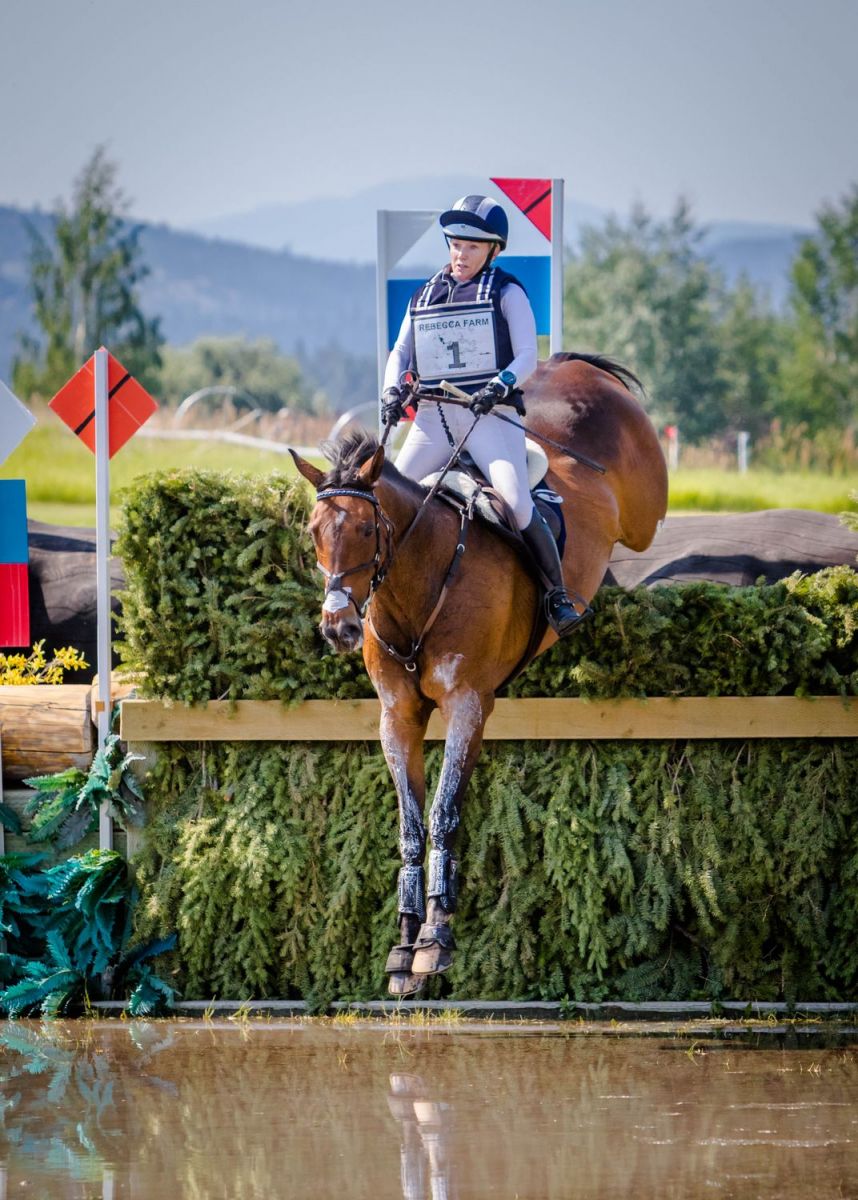 Hawley Bennett-Awad and her self-owned Jollybo moved from fifth after dressage into second place, maintaining their score of 34.5. Jolly, also known in the barn as “J-Bizzle” is a 17-year-old British Sport Horse. Hawley said, “I’m super psyched. Thanks to the Broussards – this is a world class event.”

Hawley has been coming to The Event for many years, usually with her husband in tow. He is such an integral part of her team that he attended participated in the press conference this afternoon. When asked about her ride today, Hawley’s husband Gamal (aka SBM) said, “It couldn’t have gone better. I mean it could have had more cowbell.” 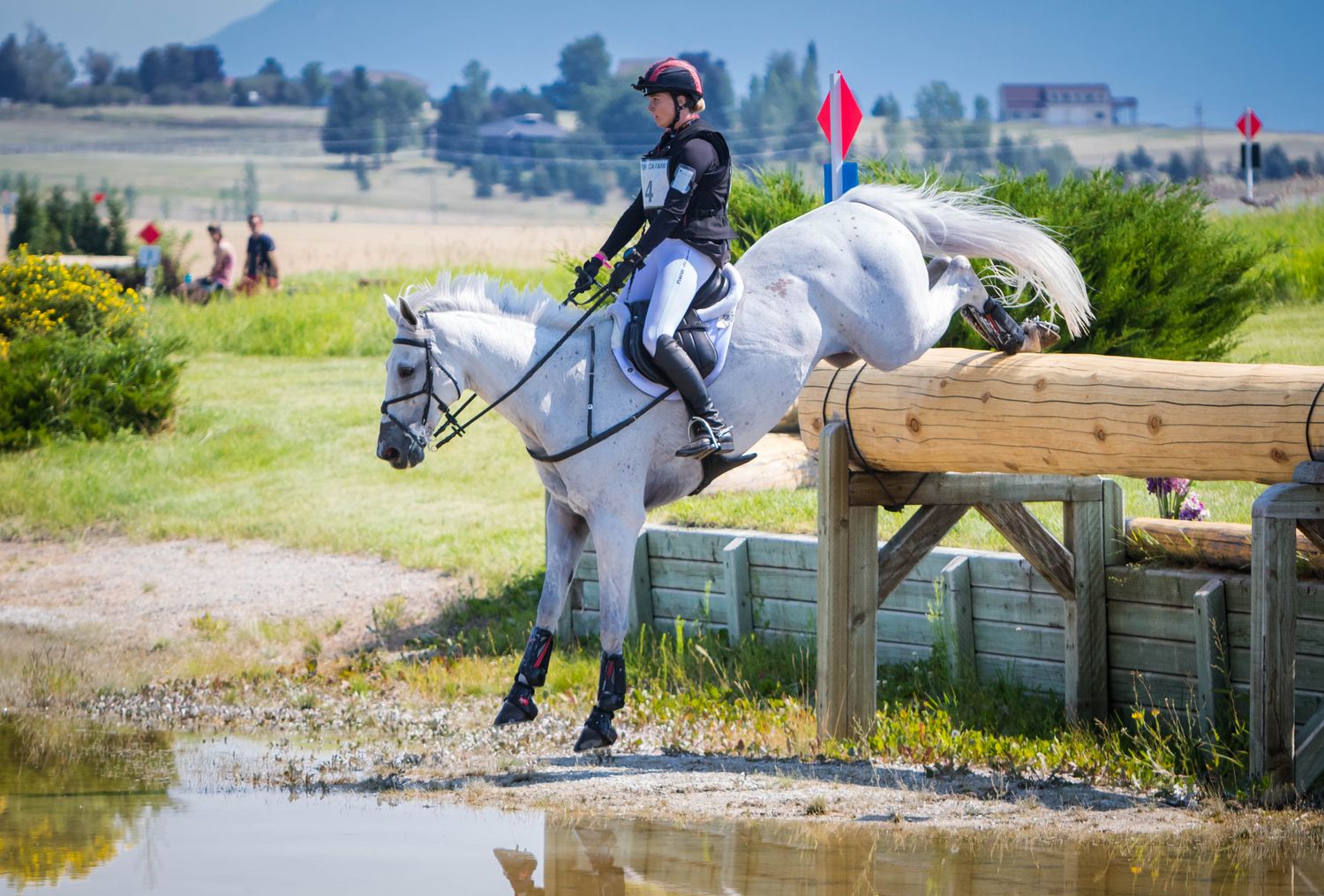 Currently standing in third place with a score of 34.9 are Caroline Martin and Islandwood Captain Jack. The 12-year-old Irish Sport Horse who goes by “James” is owned by Caroline’s mom, Sherrie Martin. “He was quite good … from beginning to end he felt like a proper 4* star horse. It was nice and fast ground.” Caroline’s fiancé, Deniz, is also a supportive horse partner and attended the press conference as her cheerleader. Deniz said “everything went great out there today” and he also wanted to pitch an idea that Ian Stark had — to run the course through the middle of the VIP tent. Perhaps that would make things even more exciting at Rebecca Farm. 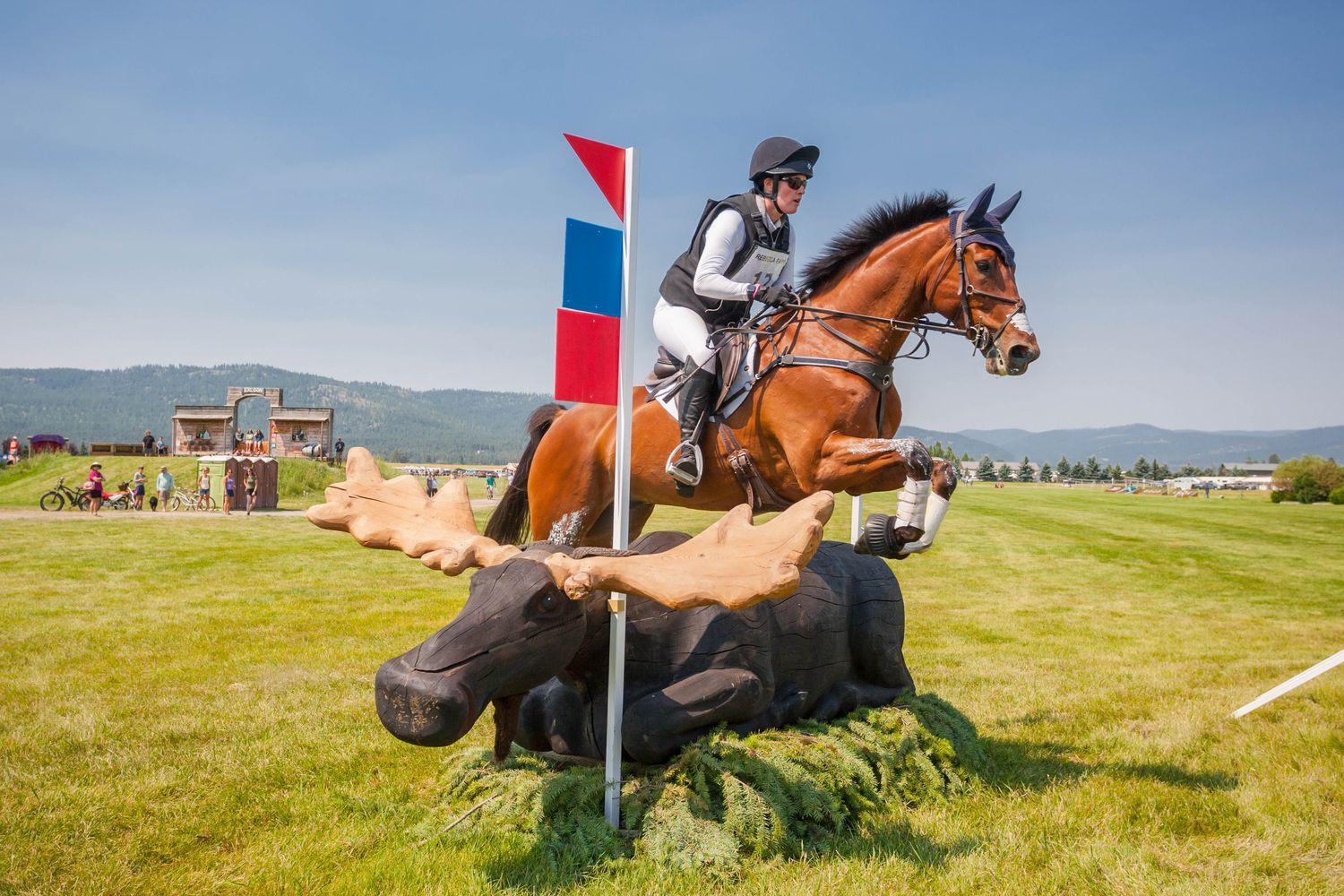 The CCI4*-S didn’t result in as many changes in the standings, with the top two staying the same after cross country. Maya Black maintains the lead with Miks Master C, a 9-year-old Swedish Warmblood owned by Laurie Cameron. Maya and Mickey added only four time penalties for a current score of 29.8. “He’s great – this is the second season at advanced with him. He went out and galloped around – it was a short course and I galloped where I could, but it was hard to make the time.” Because they drove out from the east coast, Mickey hasn’t schooled cross country for three weeks. Maya decided he didn’t need to because he is a good, solid horse, and she ended up being happy with that choice. 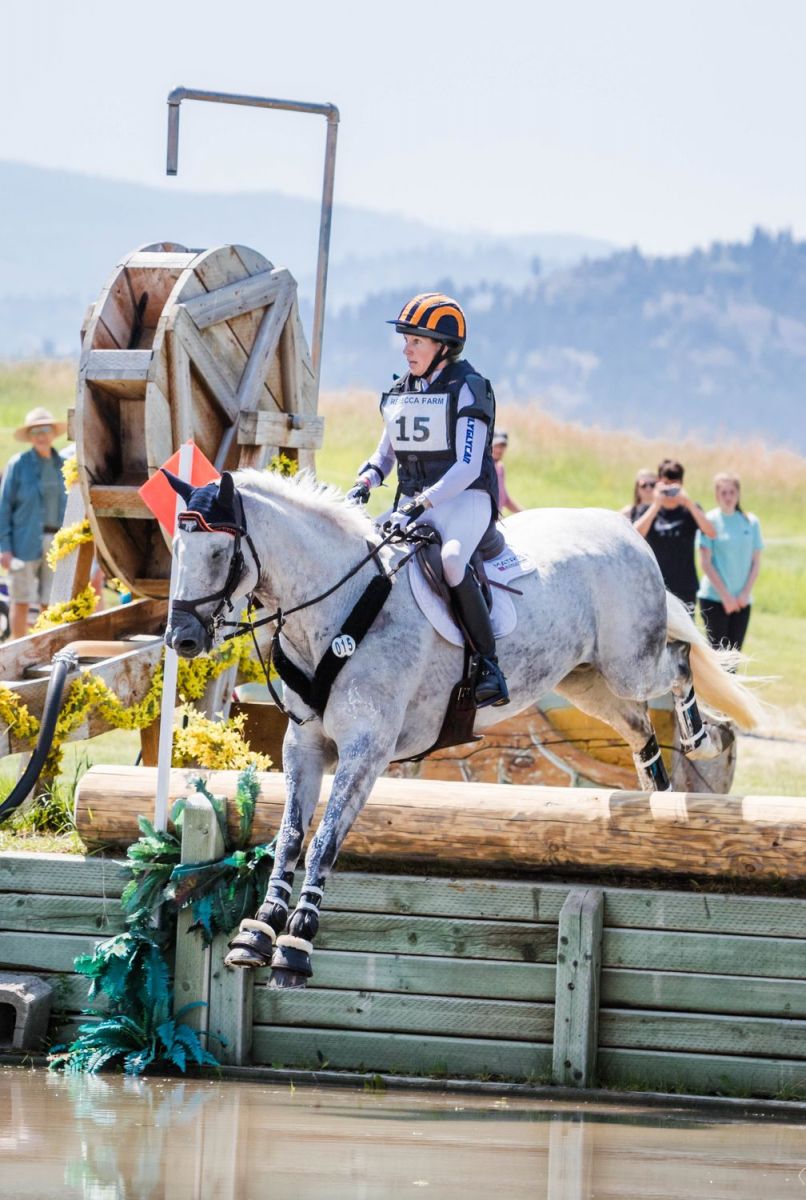 Liz Halliday-Sharp and Cooley Quicksilver added 10.8 time penalties to maintain second place with a score of 39.6. The Monster Partnership owns the 10-year-old Irish Sport Horse. When reflecting on her ride, Liz said “The Monster was a good boy. I know him really well and he’s an extremely brave horse. All the jumps rode exactly how I’d planned. I was pleased him – it was a good course and I said that to Ian. The Monster is excited to be back out running again.”

Liz, who was slated to ride for Team USA in Tokyo, changed her plans two weeks ago when Deniro Z was withdrawn from Olympic competition. Despite the disappointment, Liz said “This has been healing for the soul for me and for my owners and my family, coming here. That was partly why we did it. Just plugging away at home … was not great. So it was sort of on a whim that we came here, and I’m really glad we did.”

Liz also said she’s already booked her Airbnb for next year and will plan to make Rebecca Farm an annual destination. “If there was anywhere else in the world I’d rather be than Tokyo, it’s probably here.” 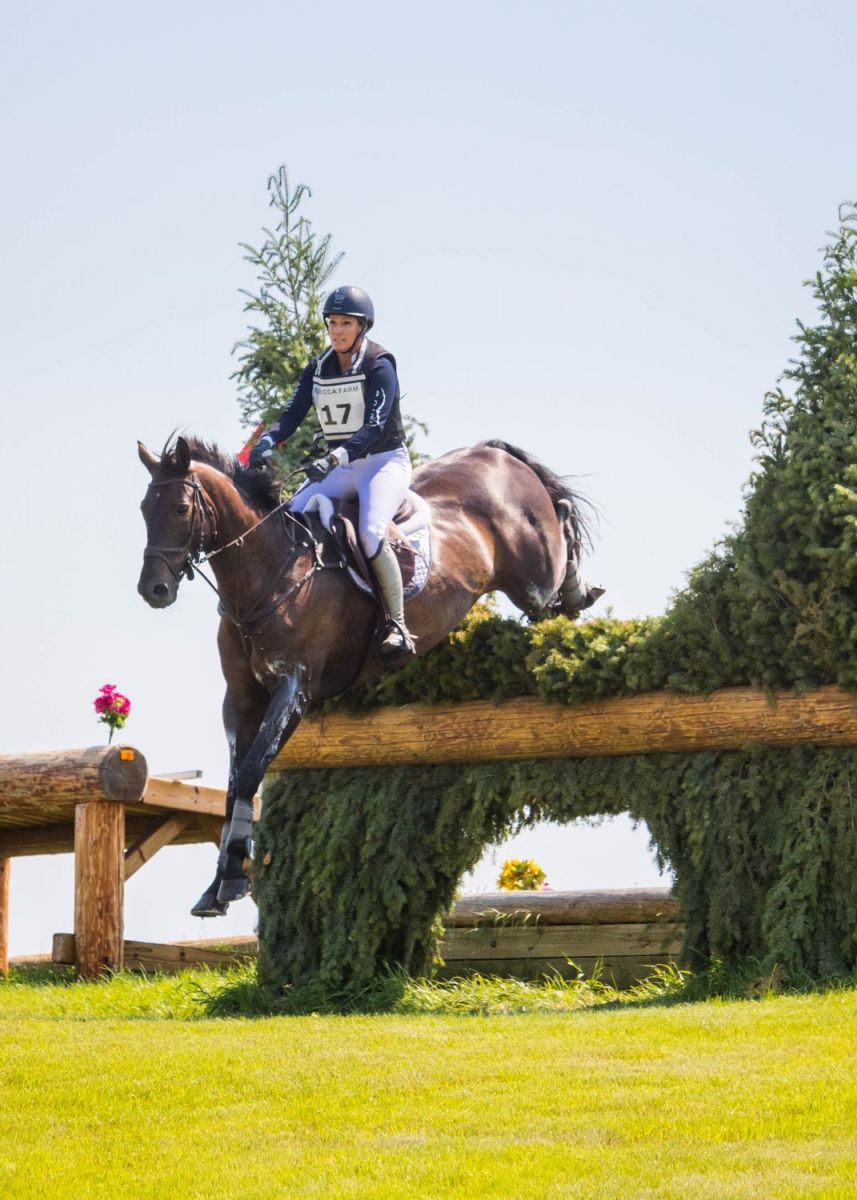 Rebecca Braitling and Caravaggio II, a 10-year-old British Sport Horse, jumped clear and added 16.4 time penalties, which moved them from seventh into third place. “Ernie” is owned by Arnell Sporthorses. “He was spooky and impressed with the waters – he’s pretty green still [at the level] but he’s a really good jumper,” Bec said about her ride. “For me the two water complexes were the most surprising to him but it’s always fun here – if they’re out in front of you, you can keep kicking on. And you know Ian always wants you to keep kicking on.” Bec, who has won the 2* a couple of times and coached the young rider teams in the past, is excited to be back at Rebecca Farm on a 4* horse. 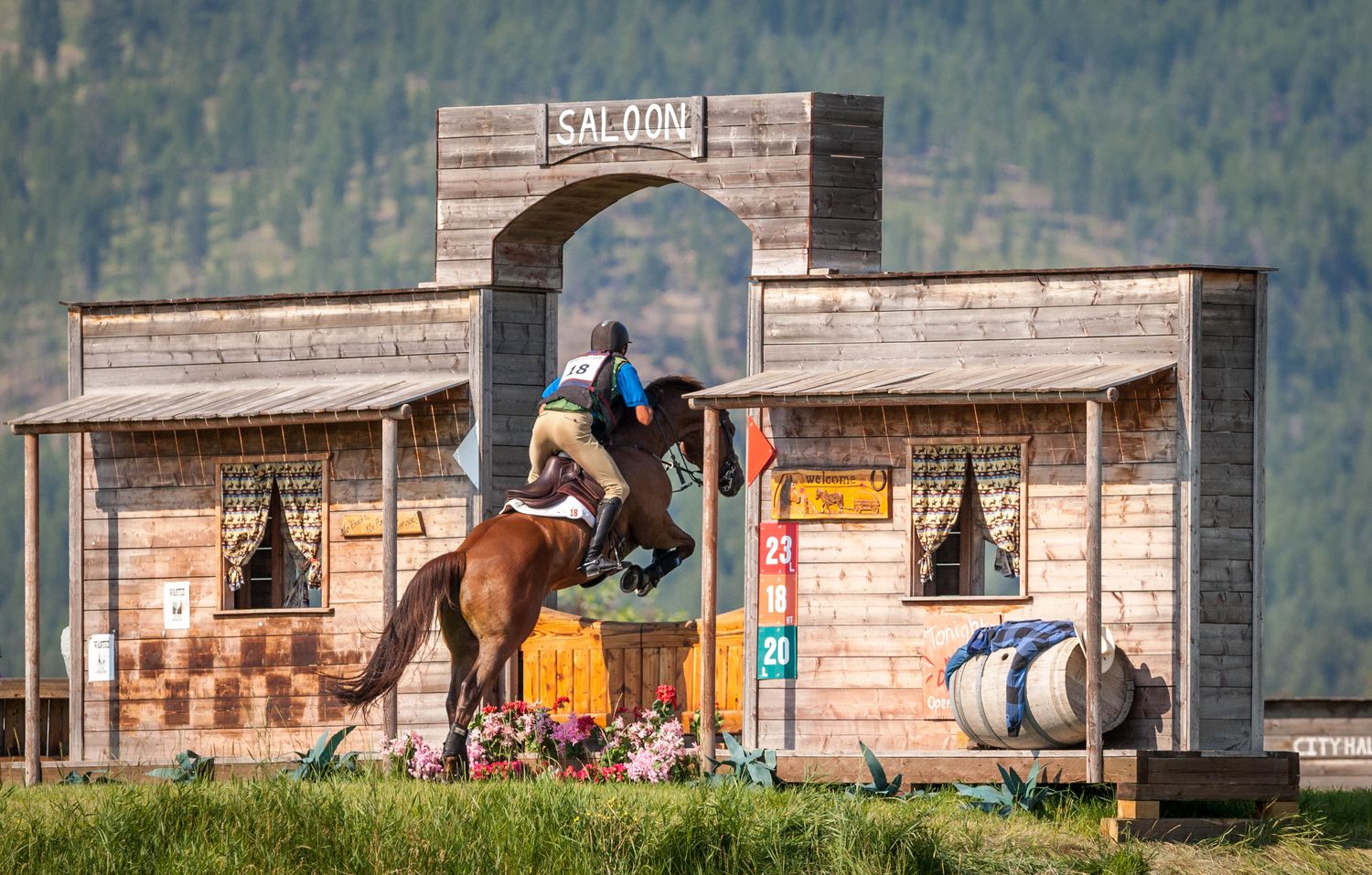 James Alliston and Nemesis, a 7-year-old Canadian Warmblood owned by Alliston Equestrian maintained their lead in the CCI3*-L. They added 2.8 time penalties for a score of 33.1. Lucienne Bellissimo and her self-owned Atlantic Vital Spark put in a double-clear round to move up from eight place into second with a score of 34.1.

Dani Sussman and Jos Bravio added only 1.2 time penalties for a score of 34.2 and a move into third place. The 10-year-old Argentine Silla is “a little horse with a big heart.” Dani said it went “super well and I want to thank my owner, Carol.” Dani traveled from Colorado for the event and said, “I’ve been here maybe 18 of the 20 years and I have watched it grow – it’s pretty spectacular.” When reflecting on the course, she said “I had to keep my gas pedal on the whole time. The combinations rode fantastic … I had to add a couple strides in two of the combinations, but he jumped so well and was so rideable.” 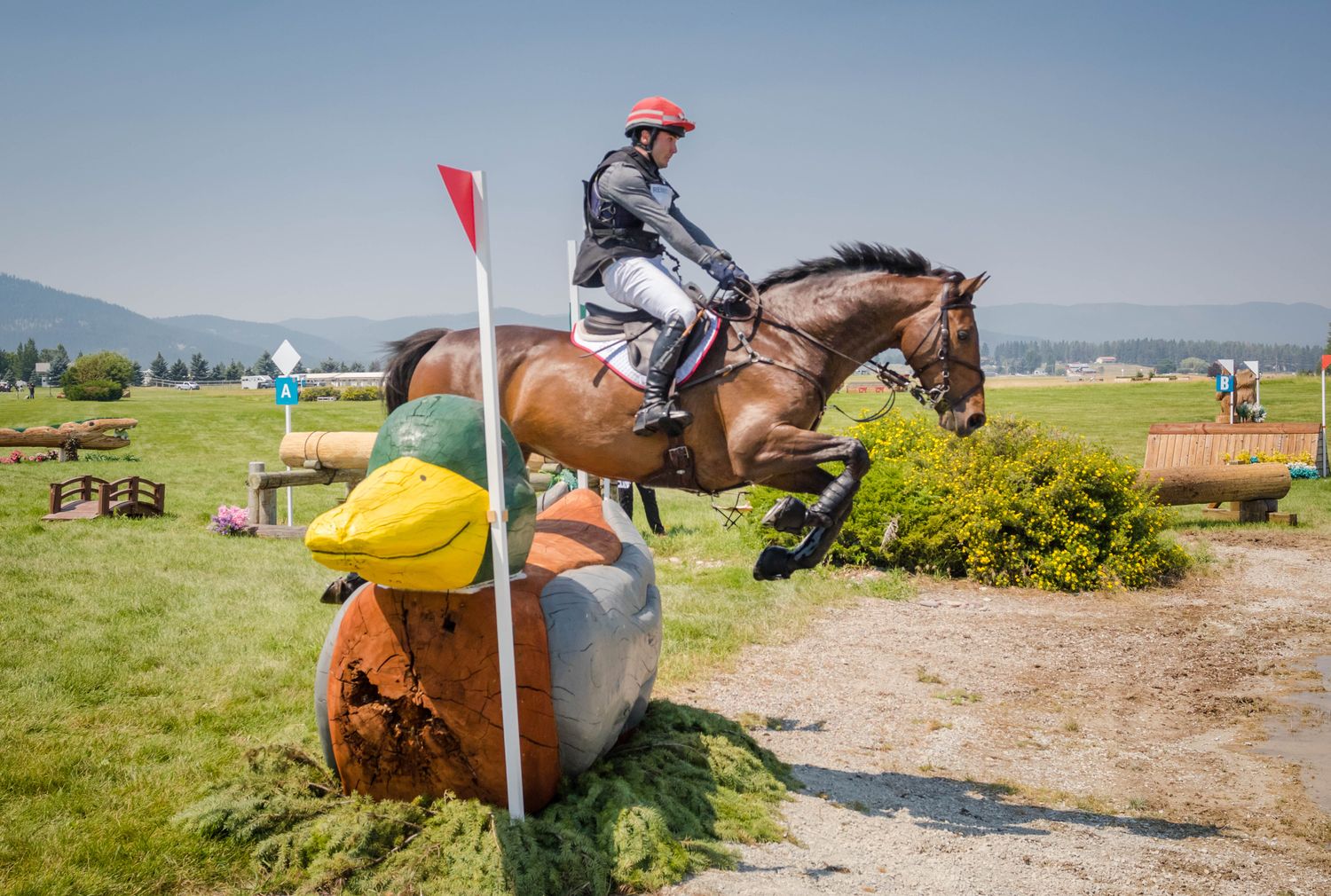 In the CCI2*-L, Tommy Greengard and self-owned Joshuay MBF maintained their lead on their dressage score of 25.4. Josh is a 7-year-old Dutch Warmblood who “was spectacular and gave me the best ride I’ve ever had on him. He really got into a rhythm and was able to gallop. The tables just came to him, and he pricked his ears at the corners.”

Maya Black and Laurie Cameron’s 6-year-old Hanoverian, Double Diamond C, also put in a double-clear to stay in second place with a score 27.0. “He’s still green but we know each other so well. He galloped around and jumped everything as expected. By the end he was like … OK just keep jumping. It was nice to have a little bit longer course, to not have to rush between the jumps.”

After a double-clear round, Chloe Smyth and Flyin Huckleberry moved into third place with a score of 31.7. Michelle Cameron Donaldson owns the 7-year-old Thoroughbred. “This is his first 3*L and this was his first time running on grass. He was really good at all the options … a little looky at the crowd” but Chloe said it was a very successful ride and she is happy to be here.

The FEI divisions begin show jumping on Sunday at 10:30am local time with the CC2*-L followed by the CCI3*-L. The CCI4*-S begins at 2:00pm, followed by the CCI4*-L. With the scores very close together, it should make for a very exciting Sunday in Montana! For the complete schedule and results visit https://www.rebeccafarm.org/

Admission for this family-friendly spectator event is free, with full concessions and a large multi-interest shopping fair, as well as a free Kid Zone that includes pony rides, PonyUp! (Horsemanship 101 classes for kids), face painting, arts and crafts, and more. A one-time, recommended $10 parking donation per car to support Halt Cancer at X and a full weekend pass is available with a $25 donation.

To access Rebecca Farm, from the junction of Highways 93 & 2, travel two miles north on Highway 93 to Reserve Loop and go west two miles, then south on W. Springcreek Rd. The entrance is 3/4 mile on the right.

ABOUT THE EVENT AT REBECCA FARM

The Event at Rebecca Farm presented by Montana Equestrian Events is held every July in Kalispell, Montana. One of the largest equestrian triathlons in the United States, The Event is also considered to have some of the world’s finest scenery. Each year it draws hundreds of riders of all levels, from amateur to Olympians. The 2021 Event celebrates the 20th anniversary of Rebecca Farm.

The Event at Rebecca Farm features thirteen courses ranging from novice to Olympic qualifier, which were originally developed by world-renowned course designer, Mark Phillips. In 2012, Scottish equestrian Ian Stark redesigned the Rebecca Farm courses. Known for his immense contributions to eventing, Stark has won multiple Olympic medals and was inducted into the Scottish Sports Hall of Fame in 2010. 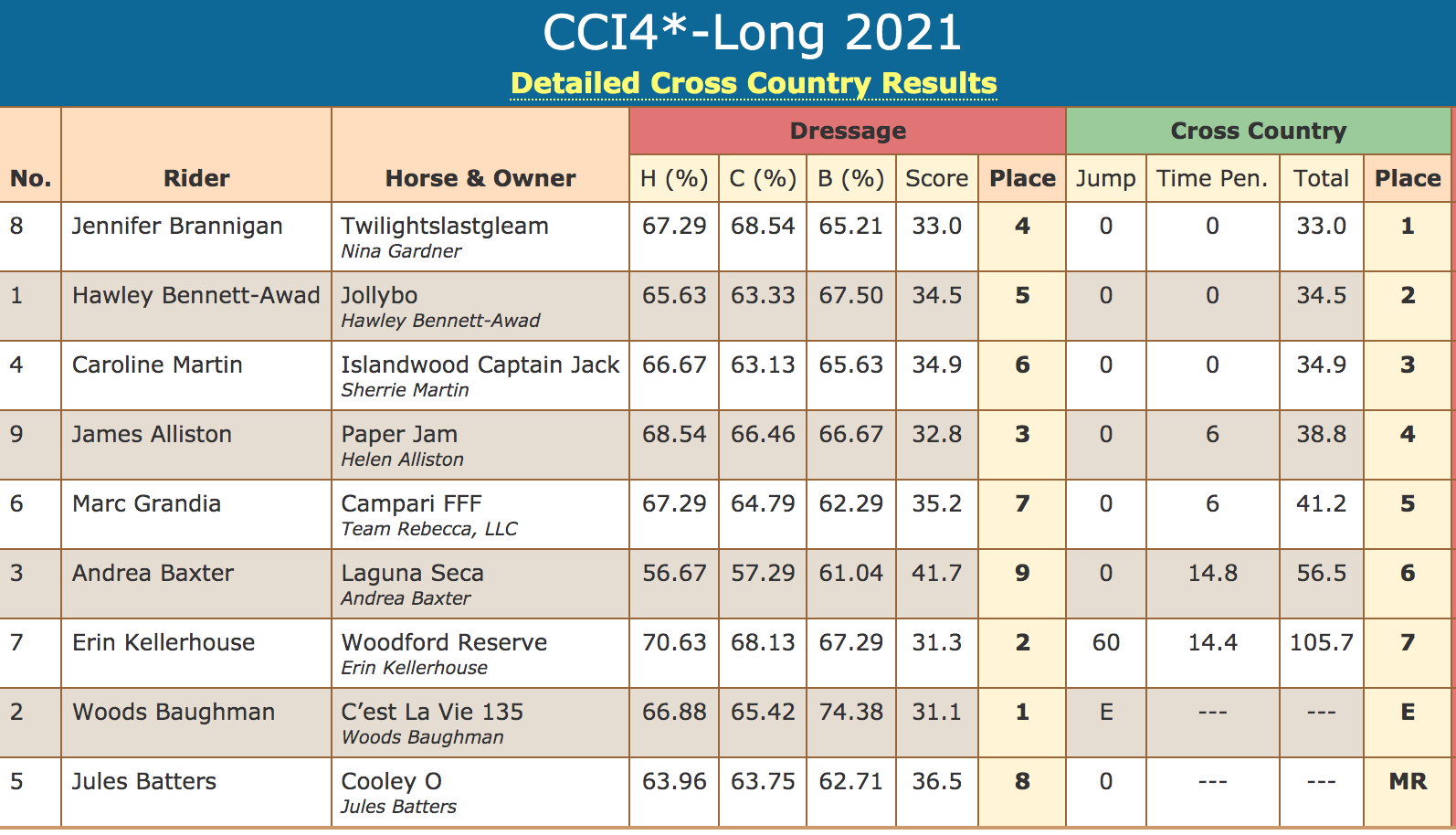 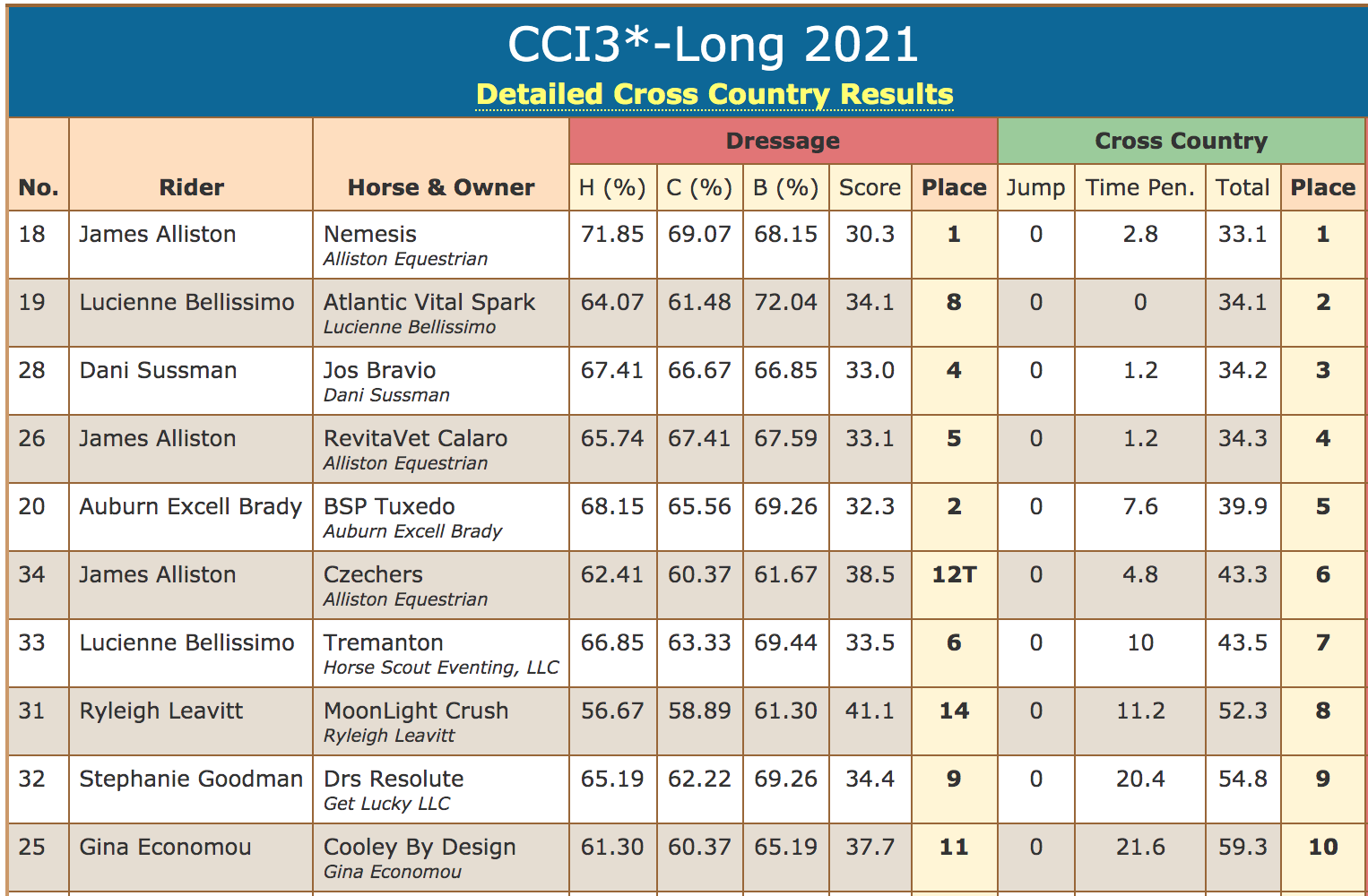 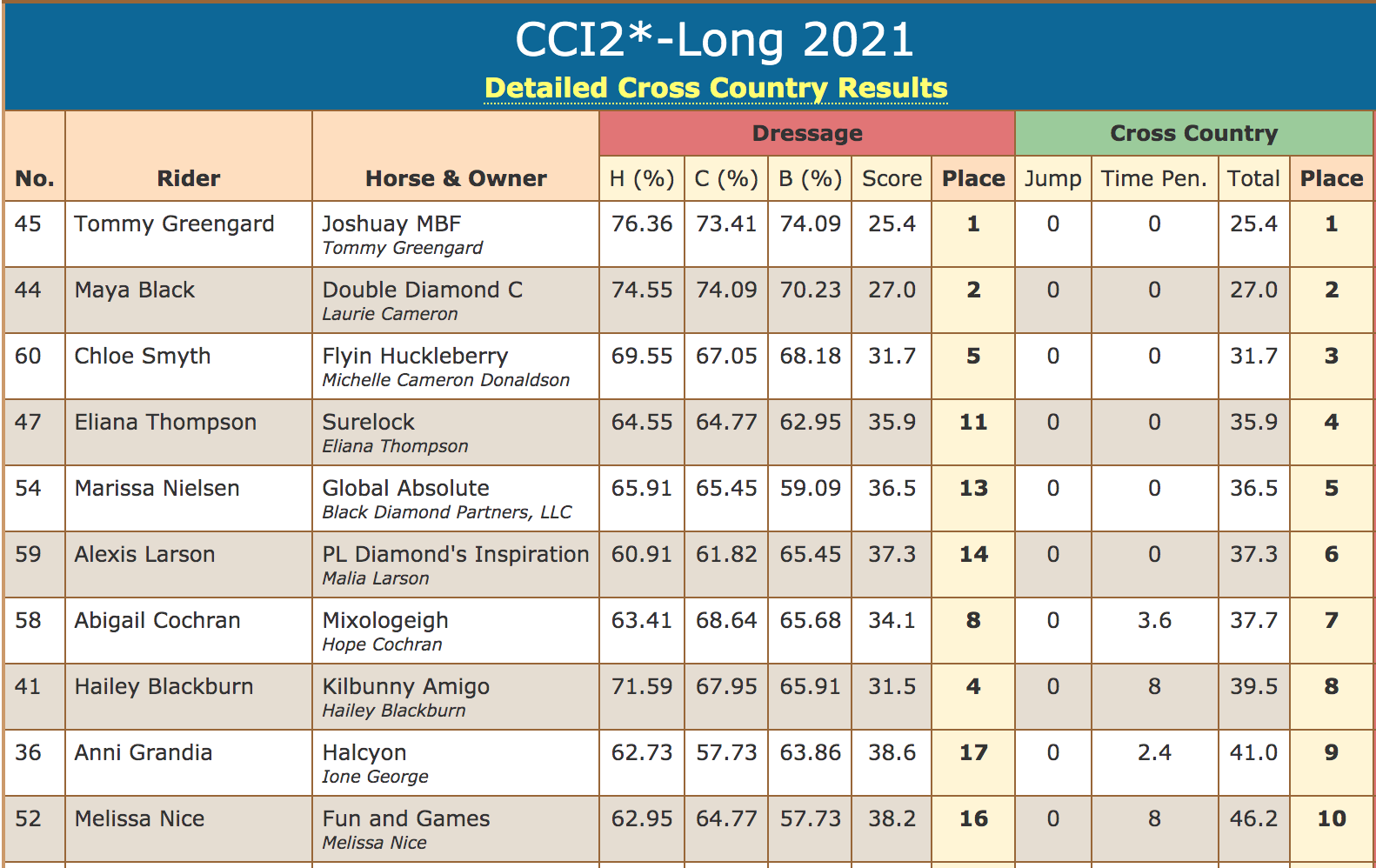