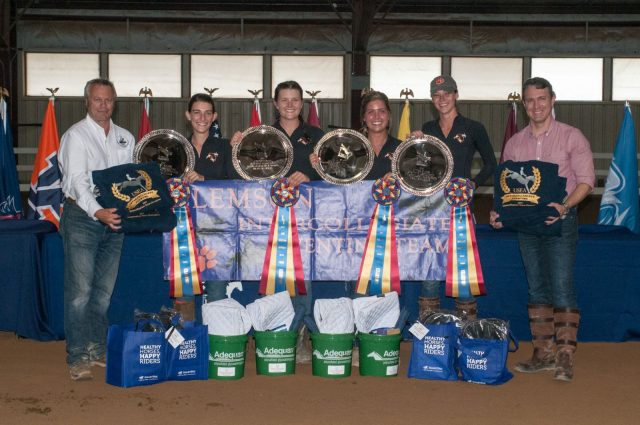 The Clemson Tigers were the winners of the 2017 USEA Intercollegiate Eventing Championship at Virginia Horse Trials. Photo by Leslie Threlkeld.

Get ready for a flood of multi-colored shakers, glitter paint, battle cries and the occasional dancing mascot. The third annual USEA Intercollegiate Championships are just over a week away and the host venue Virginia Horse Trials will welcome record entries.

Introduced at VHT in 2016, the Intercollegiate Championship has grown each year, from 10 teams the inaugural year to double that the following year. The 2018 edition of the Championship will see 23 teams representing 17 colleges and universities from around the East Coast (plus Texas and Ohio!) vying for top honors this year.

“At USEA headquarters one of our favorite times of year is in and around the Intercollegiate Eventing Championships. We can’t wait to get on grounds at the competition and witness the school spirit first hand!” USEA CEO Rob Burk said. “We are incredibly thankful to Andy Bowles and the organizing team from the Virginia Horse Trials for being amazing hosts for the Championships since its inception two years ago.” 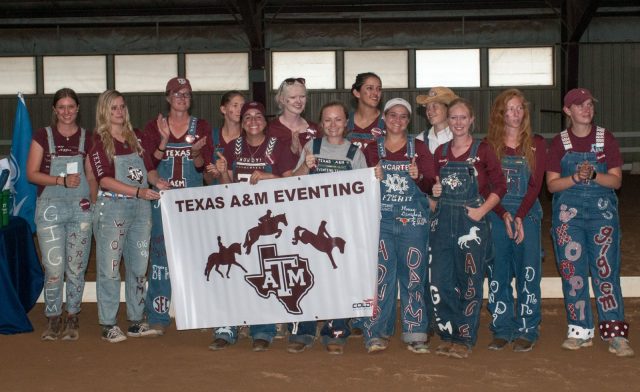 The Texas A&M Eventing Team, winner of the coveted School Spirit Award, at the 2017 Intercollegiate Championships. Photo by Leslie Threlkeld.

Previous Intercollegiate Champions University of Georgia (2016) and Clemson University (2017) will return with multiple teams and attempt to re-capture or defend their title. Texas A&M is also making the long haul from College Station, Texas. They were last year’s Spirit Award winners, which recognizes exceptional school pride and team camaraderie. Will anyone outdo them this year?

“The Intercollegiate Championships is a special event because you can see how the students have worked hard training and fundraising to get here and how they support one another throughout the competition. We want to reward those riders who may not earn a top placing but display teamwork and school spirit that defines collegiate sports,” VHT organizer Andy Bowles said. “The Championship just gets better every year and the students are very competitive, which makes for an exciting team competition.”

In addition to the competition itself, the students at the Championships have an opportunity to network and create valuable connections to carry forward in their professional careers. For all its benefits, Rob echoed a common sentiment about the Intercollegiate program: “It provides them with a community of fellow eventers and peers that will remain their friends for life.”

Posted by Clemson Intercollegiate Eventing Team on Monday, May 14, 2018