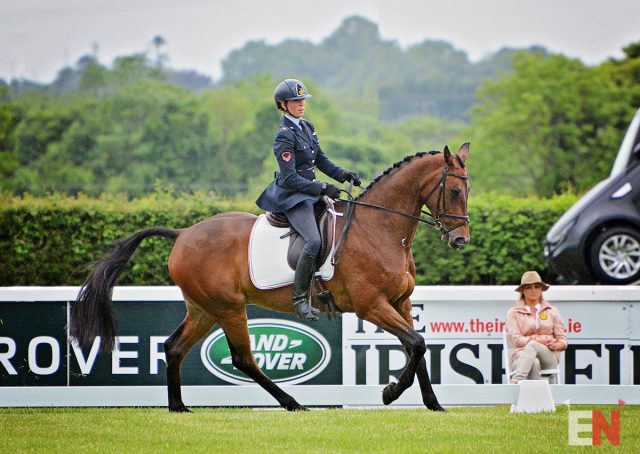 No one could catch Vittoria Panizzon’s record-breaking score of 34.5 in The Irish Field CCI3*, but three pairs in the afternoon group all made a valiant effort to give us four total scores in the 30s at the conclusion of a rainy dressage day.

Vittoria not only piloted Amy and Patricia Lambert’s Chequers Play The Game, a 14-year-old KWPN gelding (Stravinsky X Mirakel, by Lancer II), to the the best score of her entire career across all levels, but they also set the record for the lowest score in the history of the CCI3* at Tattersalls. 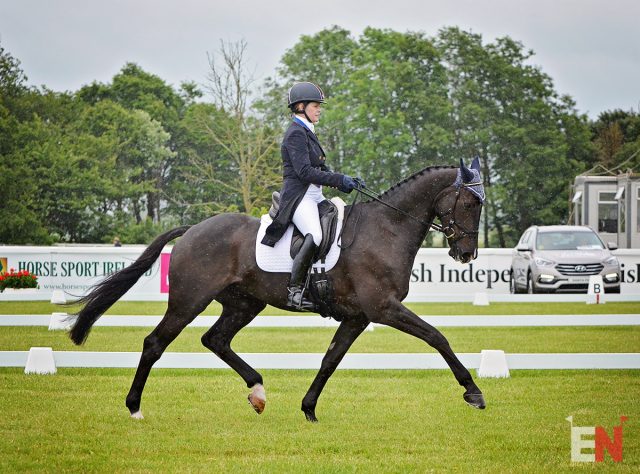 Team USA battled through the rain to have five riders sitting inside the top five in the CCI3*. Kim Severson and the Cooley Cross Border Syndicate’s Cooley Cross Border, a 10-year-old Irish Sport Horse gelding (Diamond Roller X Whos Diaz, by Osilvis), cracked the 30s for the first time at three-star level, scoring 38.5 to sit in second place.

“It was maybe not quite as good as his test at Kentucky, but I have nothing to complain about. It’s so good to be out on the grass, which we don’t do often back home anymore,” Kim said. “I got both my changes, which is huge for him. The mediums could have been a lot better, but I’m very pleased.”

As for her thoughts on cross country, Kim echoed what the riders have been chatting about all day: There is plenty to do on Ian Stark’s course, and the penultimate combination at fence 22 will almost certainly cause issues. A sharply angled brush set on two strides invites a runout at the end of the course. 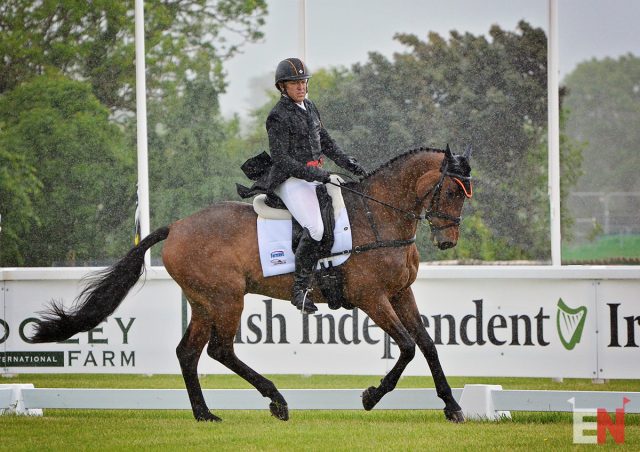 Buck Davidson and Carlevo, a 10-year-old Holsteiner gelding (Caresino X Ramatuelle, by Levernois), went in the worst of the rain as the final pair to go in the CCI3*, also scoring a personal best at the level to sit third on 39.0.

“The rain definitely started to bucket down right as I was going in. He coped really well; he’s a trier,” Buck said. “In the conditions I couldn’t be happier with him. He’s a balanced horse and doesn’t want to slip.”

As for Buck’s thoughts on the course: “It’s a little bit old fashioned and open with big jumps. It’s a flat landscape here, but Ian has everything set on a mound or bump. The combination at the end is very difficult. My horse’s buildup has been very good for the event; he’s ready.” 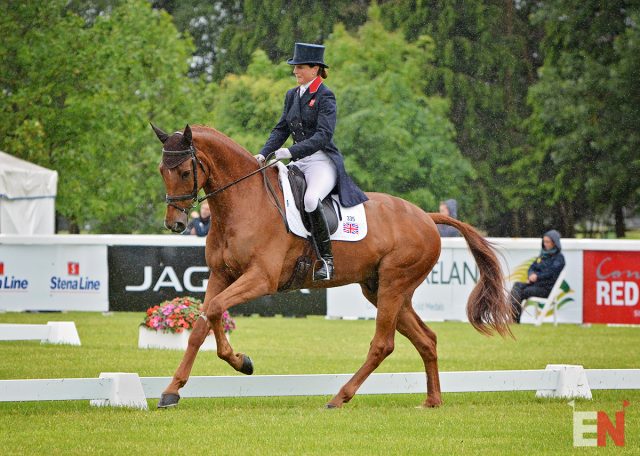 Piggy French and Jayne McGivern’s Quarrycrest Echo, a 10-year-old Irish Sport Horse gelding (Clover Echo X Royal China, by Cavalier Royale), scored in the 30s for the first time in the horse’s career to sit fourth on 39.3. “Red” is making his CCI3* debut at Tattersalls.

Phillip Dutton and the Revelation Group’s Fernhill Revelation, an 11-year-old Irish Sport Horse gelding (YOU X Hallo Noble Girl, by Hallo), delivered the best score of their partnership to date as the first pair out this morning to sit in fifth on 40.6. Click here to read comments from Phillip about his test with “Warren” in our lunch report. 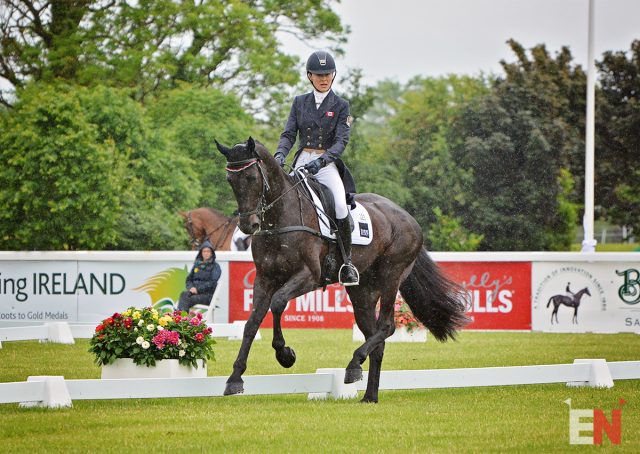 Kathryn Robinson and Gayle Robinson’s Let It Bee, the sole combination representing Canada in the CCI3*, scored 44.1 to sit in eighth place. The 16-year-old Westphalian gelding (Lamerto H X Baroness, by Brentano II) is re-routing from Badminton after an unfortunate slip at The Lake unseated Kathryn.

“He struggles with the changes but he was a very good boy. He’s a bit surprised to be back at a competition after Badminton. He came here quite fresh — a bit too fresh! We had a lorry that was coming to Tattersalls already, so the idea in bringing him here is to get more points for next year at Badminton. He’s not getting any younger, and I’m riding him while he still feels good.” 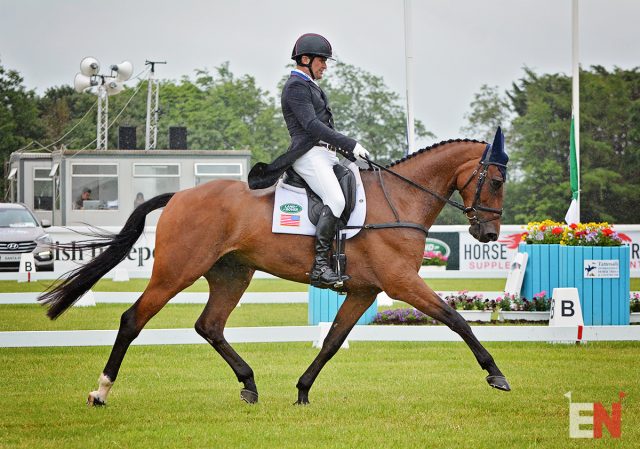 “There are always parts of the test you can improve,” Phillip said. “He is a work in progress and it looks like it will be a good future for him. There is a good atmosphere here and he can be a nervous horse, but he knew his job today.”

Katherine Coleman and her own Back to Business, a 10-year-old Irish Sport Horse mare (Harlequin Du Carel X Moxella, by Quick Star) scored 57.7 to sit in 20th place at the conclusion of dressage in the 31-horse division. You can read her thoughts on how “Bizzy” handled her first CCI3* dressage test in our lunch report. 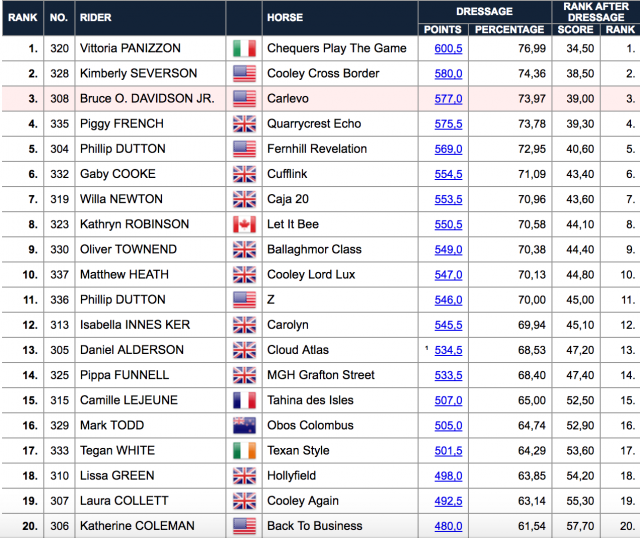