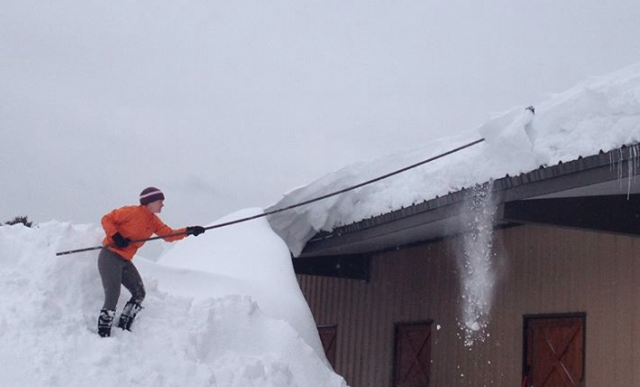 The greater Boston eventing community is reeling after record snowfall has dropped more than 7 1/2 feet of snow on the area in just 30 days, with numerous indoor arenas and barns in the area collapsing under the weight of the snow.

The North and South shores have been hit particularly hard, with five indoor arenas collapsing in that area alone since the unrelenting snowfall began in January, including the iconic indoor at Tony and Leslie Bartolotti’s Gathering Farm in South Hamilton, Massachusetts, last week.

Babette Lenna, the farm’s head trainer who is currently in Aiken for the winter, said a maintenance crew had checked the indoor on Monday, Feb. 9, and found the structure was holding up well after Winter Storm Marcus quickly dropped about 2 feet of snow.

The crew returned the next day at around 1 p.m. to once again check the weight load on the indoor, and three cracks had developed in the tresses. All trailers and equipment were then moved away from the indoor, which was immediately closed for riding.

Plans were made to have an engineer look at the structure the next day and to have the crew remove all the snow from the roof. But the indoor collapsed around 7:45 p.m. that evening.

“It was completely unexpected because we really felt like we had a handle on the situation and a good grasp of what needed to happen,” Babette said. “It was shocking and painful, not just from a business standpoint, but because of the history behind the indoor.”

Gathering Farm served as the USET eventing team training headquarters under Jack LeGoff in the 1970s, and Advanced rider Jim Stamets trained out of the farm for 15 years. The indoor, which was built in 1978, saw numerous top riders come through its doors during that time.

“The outpouring of condolences and support from people in the local eventing community has been overwhelming,” Babette said. “Everyone understands what a huge loss this is.”

Babette, who went home to Massachusetts on Monday and Tuesday to survey the damage, said Gathering Farm barn manager Jen Chociej has done an unbelievable job of holding down the fort as she prepares to compete in the Advanced Test B division at Pine Top in Aiken this weekend with Little Oliver.

Babette is no stranger to snow, hailing from Maine originally and living in Massachusetts for the past decade, but she said even she was stunned to see the amount of white stuff on the ground this week. “Almost more shocking than seeing the indoor was seeing all the snow banks,” she said. “I’ve never seen anything like it.”

Snow photo courtesy of EN reader Abby Powell, who is also weathering this crazy Boston winter. More photos can be seen on her blog here.

In addition to indoors collapsing, barns in the area have also been caving in under the weight of the snow. In just one example, the barn roof at Dry Water Farm in Stoughton, just south of Boston, began collapsing this past Sunday afternoon on Feb. 15 despite owners Edward and Davy McNamara and their daughter, barn manager Danielle McNamara, knocking off a substantial amount of snow the night before.

The McNamaras put out a call on Facebook asking for help evacuating the 33 horses at the farm, all of which were inside the barn at the time the roof started collapsing. In a wonderful outpouring of support, people started showing up with trucks and trailers and were able to evacuate all the horses in just three hours.

Boston eventer Megan Kures had moved her horse to Dry Water for the winter to take advantage of the farm’s indoor arena, and she said the response from the local horse community was amazing.

“I was able to get to the facility right away after hearing about the collapse, but I do not have a truck or a trailer.  We dug out several trailers stored near the barn,” Megan said. “A young guy with no connection to the barn or anyone there showed up with his pick-up right after the call was put out.

“We hooked him up to a trailer, and he trucked my horse and another out. After he dropped us off at a nearby barn, he went back for more horses. This was all in the midst of barely plowed roads and blizzard-force winds. It isn’t every day you see such kindness from strangers.”

There is a donation account set up at this link to help fund repairs to the barn at Dry Water Farm.

Boston is now only one foot of snow away from setting a record for the city’s snowiest winter of all time. Already the area has set the following records:

Meteorologist Alan Dunham told Bloomberg: “I have over 41 years of government service dealing with the weather in one form or another; I can’t remember the snow pack being this deep over southern New England. It is pretty darn amazing.”

The Massachusetts Emergency Management Agency reports that more than 70 roofs in the area have collapsed since Feb. 9. These jaw-dropping snow photos Discovery.com rounded up show just how serious the situation has become in Boston. Boston.com reports the city expects to spend $35 million on snow removal this winter, the highest sum in city history.

Are you an EN reader weathering the storm in Boston or the surrounding area? Send us your stories, photos and videos to [email protected]. This gives a whole new meaning to the term “snowmageddon.” Stay safe, EN!

[Boston Snow You Have to See to Believe: Photos]

[Marcus Sets All-Time Snow Records: How Much Snow Has Fallen?]