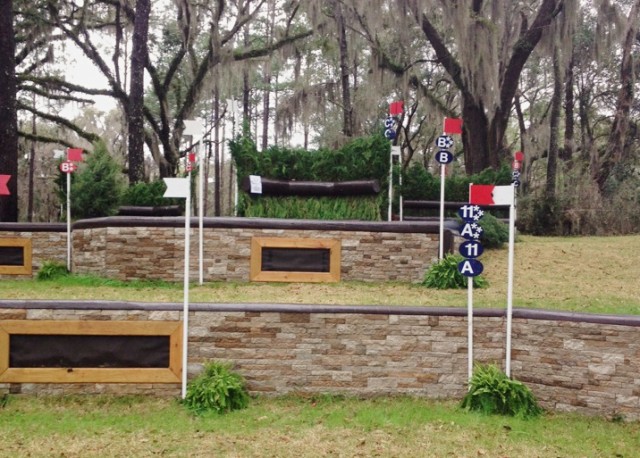 It’s go time at Red Hills! Follow along with this post for live updates from all the CIC3* action at Red Hills. I’ll also be watching the 12 Advanced horses that go out just before the CIC3* to give you an idea of how the course is riding. So far, the footing has been holding well for the Preliminary and CIC* horses. Check out my quick morning update with video of Nature’s Dew Pool here. Three horses have been withdrawn so far in the CIC3*: Mighty Nice, Petite Flower and Park Trader. Go Red Hills!

12:19: The course is running smoothly overall for the Advanced riders, though there’s been trouble in the main arena at 5a. Both Lisa Marie Fergusson and Colleen Loach retired there. Erin Sylvester said she thought horses could be having trouble seeing the first corner, which is currently shaded. 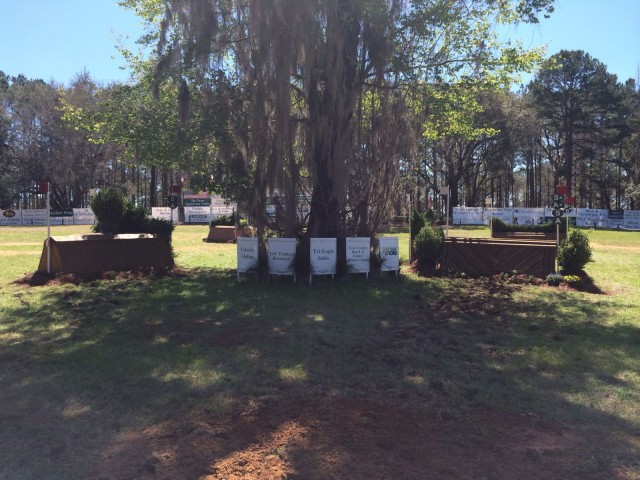 12:45: I spoke too soon. Buck Davidson and Copper Beech had a stop at 5b at the corners in the arena. The CIC3* is doing an S-turn through the Arena Complex. The Advanced did a straight line.

12:48: Selena O’Hanlon and Foxwood High also had a stop at the corners in the main arena. It looks like the shade could be causing visibility issues for the horses.

12:50: Jan Byyny and Syd Kent had three refusals at the corner at 5a and are eliminated. Just Libby Head and Werner Geven have made it through the arena so far without a refusal.

12:55: Bobby Meyerhoff and Utah B also went through the main arena with no problems. So we are seeing good trips through there.

12:57: Bobby and Utah B whacked the upright fence at 6 on their way out of the arena, so there’s a quick hold to fix the pin there.

1:04: Caitlin Silliman and Remington XXV had three refusals at 5a and were eliminated.

1:06: Katie Frei and Houdini also had three stops at 5a and were eliminated.

1:07: Kevin Keane and Fernhill Flutter also had a stop at 5a but continued on well.

1:09: Eliza Farren and Bantry Bays Dublin also had a stop at 5a.

1:14: Eliza Farren fell at fence 16. Both Eliza and the horse are reportedly OK.

1:17: Phillip Dutton and Fernhill Fugitive had a stop at the corner at 5a in the main arena. They cleared it on the next attempt.

1:23: Allie Knowles and Sound Prospect had a stop at 5b in the main arena.

1:27: Dana Widstrand and Relentless Pursuit had a stop at 5a and continued on clear after that.

1:33: Jennie Jamstrom and Cape Town jumped the wrong fence in the arena and were pulled up at The Shire.

1:34: Peter Atkins and HJ Hampton retired in the main arena after two stops at 5a.

1:37: Big cheer for Jennie Brannigan and Cambalda as they cruise through the main arena with no problems.

1:38: Werner Geven and Vandiver had a stop at 16a at the Sawgrass Mill water complex.

1:40: Angela Gryzwinski and Novelle had two stops at 5a and retired.

1:47: Hallie Coon and Namaste retired somewhere around fence 14. They looked pretty sticky through The Shire, so I’m guessing things just weren’t going quite right for them today.

1:48: Erin Sylvester and No Boundaries retired at fence 5 in the main arena.

1:56: Phillip Dutton and Atlas were reportedly off course very early on and retired.

2:07: Katy Groesbeck and Oz the Tin Man had a stop at 11b at the steps at Stairway to Heaven.

2:10: Hannah Sue Burnett and Harbour Pilot had a technical elimination. She thought she was clear at 5a and went on to jump 5b, but the jump judge assessed a stop at 5a.