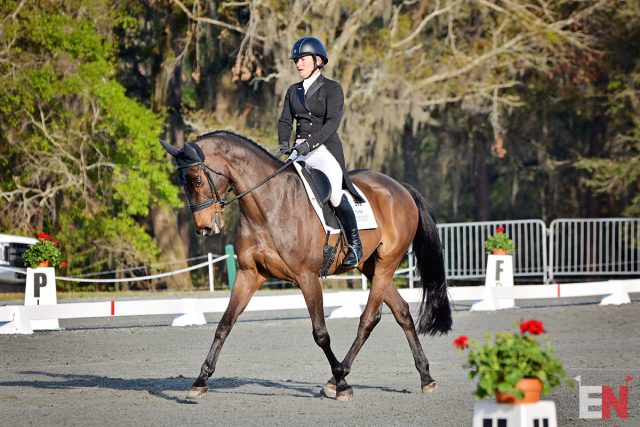 Hannah Sue Burnett and Harbour Pilot set the tone early in the day in the CCI4*-S at Red Hills International Horse Trials CCI4*-S here in Tallahassee, Florida, and never relinquished their lead, topping the division at the conclusion of dressage on 26.4.

In four career completions at Red Hills, Hannah and “William,” a 16-year-old Irish Sport Horse (Cruising X Shannon, by Catch On Fire) owned and bred by Jacqueline Mars, have finished no lower than seventh, including winning the CCI4*-S in 2017.

“He felt right at home in there and went right to work,” Hannah said. “I thought it was a bit of a steady test in the trot work, but it was really consistent, and the canter work was nice. I’ve been working on getting the frame up more and push him up into that, and it felt like it was quite good today.”

As for her thoughts on tackling Mike Etherington-Smith’s cross country course tomorrow: “It looks challenging enough. I think Red Hills is always a really good eye-opener for the season. It gets you on track for the bigger events later in the year. They’ve done an amazing job in the preparations. All of the fences are beautifully presented.”

Hannah’s Plan A for William’s spring season is to run at The Fork at Tryon in preparation for the Land Rover Kentucky Three-Day Event, which would be the horse’s third appearance at Kentucky. 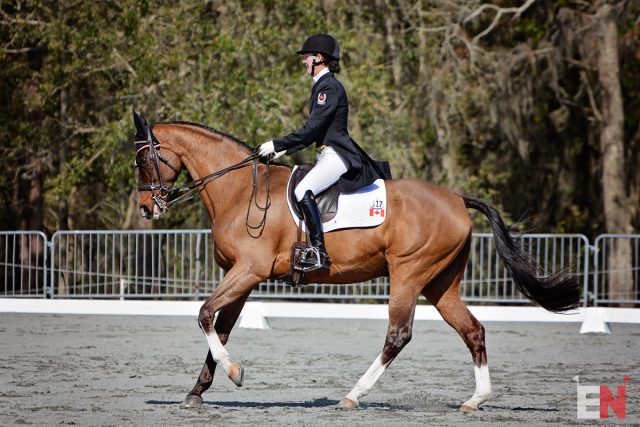 Selena O’Hanlon and John and Judy Rumble’s Foxwood High, a 16-year-old Canadian Sport Horse bred by Epstein Equestrian (Rio Bronco W X Evita II), sit in second place on 26.8, one of their best dressage scores at the level. “Woody” finished fourth last year and is EN’s pick to win this weekend as he gears up for a return trip to the Mitsubishi Motors Badminton Horse Trials in May.

Felix Vogg and Jürgen Vogg’s Cayenne, impressed in the mare’s CCI4*-S debut, scoring 27.0 to sit in third place. The 10-year-old Swedish Warmblood mare (Careful X Baroness, by Bayron) is very green to the level, having only just stepped up at Rocking Horse Winter II H.T., but she won that event on her dressage score.

Jacob Fletcher and Atlantic Domino, a 14-year-old Irish Sport Horse (Dunlough Striker X Atlantic Amanda, by Glidawn Diamond) owned by Frank Fletcher and Fletcher Farms, cracked into the 20s for the first time at three-star level and sit fourth on 27.7. Last year, Jacob and “Domino” sat 13th after dressage and ultimately finished second in the CCI4*-S with one of the fastest cross country rounds, so this is definitely a pair to watch closely tomorrow.

Jessica Phoenix and Pavarotti, her own 17-year-old Westphalian (Pavarotti van de Helle X Fidelia, by Foxiland xx), scored 28.5 to round out the top five. “Rotti” finished fifth in the CCI4*-S at Red Hills last year. 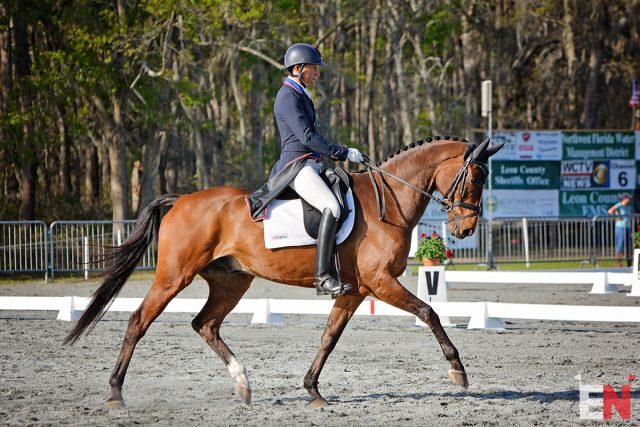 Aside from a flub in the final flying change, Long Island T, a 13-year-old Oldenburg/Thoroughbred (Ludwig von Bayern X Haupstsbuch Highlight, by Heraldik xx), delivered a solid test. “He’s getting stronger and stronger, and there’s definitely a couple more marks in there,” Boyd said.

“Ludwig” is qualified for the Land Rover Kentucky Three-Day Event, but Boyd said he will see how the horse comes out feeling at the major prep events this spring before deciding to aim for the horse’s CCI5*-L debut or another CCI4*-L. “At the moment he’s oozing with confidence,” Boyd said. 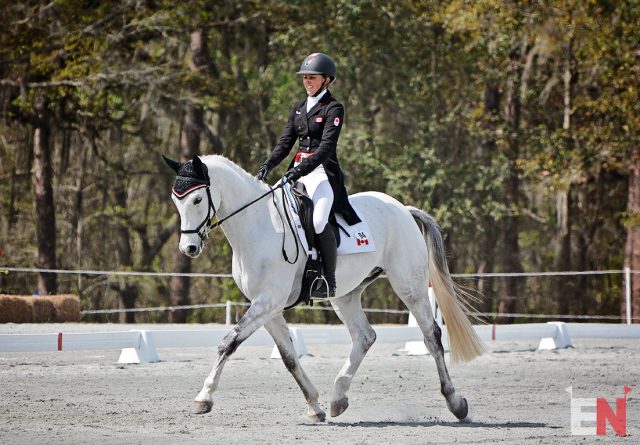 Jessica Phoenix and Bentley’s Best scored 25.0 to lead the 53-horse CCI3*-S division on 25.0. “Benny,” an 11-year-old Trakehner gelding (Hirtentanz X Hauptstutbuch Baronesse XIII, by Eichendorff) owned by the Bentley’s Best Group, is one of Jessica’s hopefuls for the 2019 Canadian Pan American Games team.

Lesley Grant-Law and Lady Chatterley, an 8-year-old Holsteiner (Connor 48 X Jucy, by Mytens xx) she owns with Jackie and Steve Brown, broke into the 20s for the first time in the mare’s international career to sit second on 28.2. This pair finished 11th in the Ocala Jockey Club International CCI3*-L last fall.

Caroline Martin and Sherrie Martin’s Danger Mouse, an 11-year-old KWPN gelding by Kannan, sit third on 28.9. These two were named to Erik Duvander’s team for the North American Futures Team Challenge at Carolina International next month. Click here to learn more about the North American Futures Team Challenge, which is designed to complement the new U.S. Eventing Pathway Program.

Lynn Symansky and Global Cassero 3, an 8-year-0ld Hanoverian (Conteur X Wahida, by Windauch) owned by KC Eventing, snuck in as one of the final pairs to go in the 47-horse CCI2*-S division to lead on 25.2. Produced to the two-star level by Germany’s Ben Leuwer and Ireland’s Brian Morrison, “Jerry” is a new ride for Lynn, and she is currently looking for owners to join her in the journey.

Christina Henriksen, who recently returned home to the U.S. after training and competing in England for nearly four years, led the CCI2*-S for much of the day and ultimately sits second on 25.6 with JTH Zest, her own 8-year-old British-bred mare (Zamboucca X Maybee Baybee, by Mayhill).

Natasha Erschen and her own Fernhill Flutter, a 17-year-old Irish Sport Horse (Puissance X Warrior Queen, by Euphemism), cracked the 20s for the first time and sit third on a personal best score of 27.4.

More Facts You Need to Know

Will Coleman and Chin Tonic HS, a 7-year-old Holsteiner gelding owned by Hyperion Stud LLC, delivered the lowest dressage score across all divisions today to top the Open Preliminary on 19.4 — the only score of the day in the teens.

Maddie McElduff and and her own Tupelo, a 10-year-old Trakehner mare (Baron Verdi X Thabana, by Buddenbrock) bred by Timothy Holekamp, lead the Preliminary Rider division on 30.0. Fun fact: This mare is a half-sister to Boyd Martin’s 2018 World Equestrian Games mount Tsetserleg, as both horses are out of the same dam.

Cross country starts tomorrow at 8 a.m. EST in this order: CCI2*-S, Open Preliminary, Preliminary Rider, Advanced, CCI4*S, CCI3*-S. Click here to view the order of go. There is no live stream, but EN will run live updates for the CCI4*-S, which starts at 12:07 p.m. Stay tuned for a full preview of Mike Etherington-Smith’s course. Go Eventing. 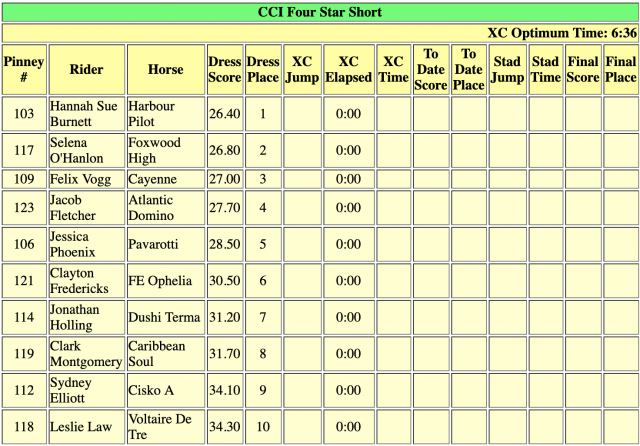 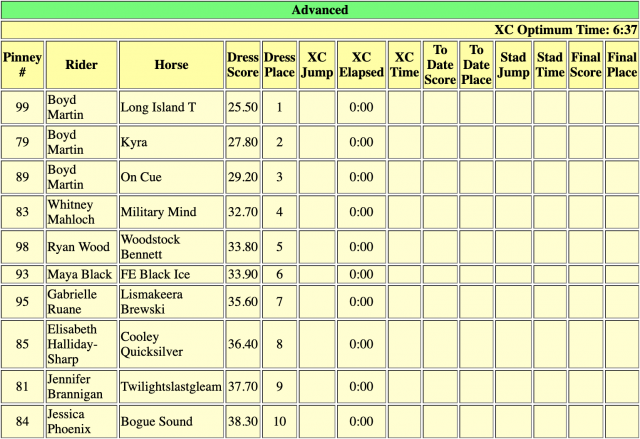 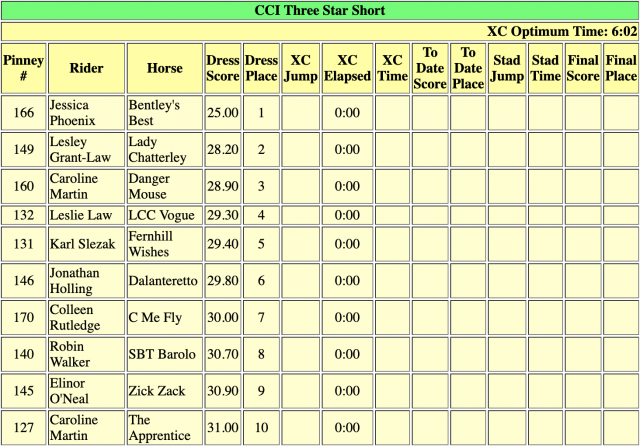 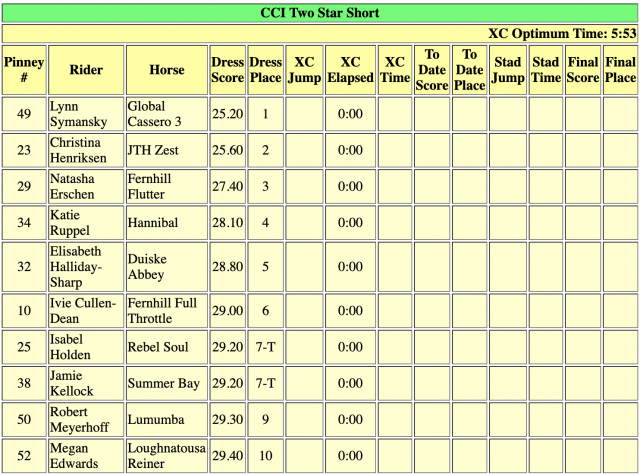