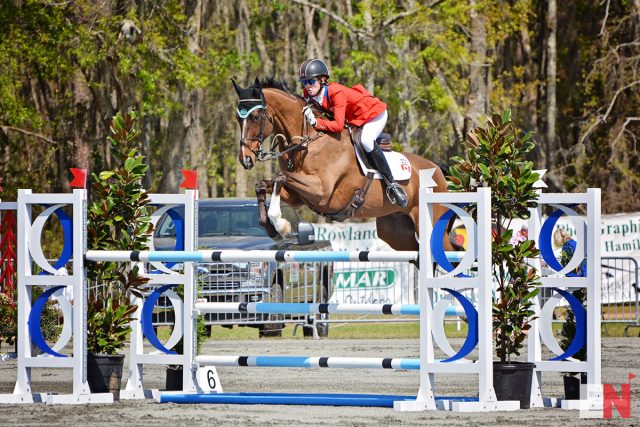 Selena O’Hanlon and John and Judy Rumble’s Foxwood High have never finished outside the top 10 in the CCI4*-S at Red Hills International Horse Trials, and today they finally took a well deserved win in dominant fashion. After poles came tumbling on Chris Barnard’s show jumping course, they could have had three rails down and still won.

“Woody,” a 16-year-old Canadian Sport Horse bred by Epstein Equestrian (Rio Bronco W X Evita II xx, by Abacus xx), tapped the last fence in the triple combination but stayed inside the time allowed of 90 seconds to take the win on a final score of 30.8.

“The big, open ring is tough for Woody because it means I have to move him on, and I worry that he gets strung out, and then I have to get him back to fit all the strides in because he’s such a big guy. I really tried to make it up in the turns and did some really tight rollbacks,” Selena said.

“The rail was completely my fault. I came around, I did the tight turn, and I waited just a little too much and took away. He jumped in great, but he had to really push on to get over the oxer, and that made him a little flat coming out. I honestly would prefer time faults over a rail because this year we have been jumping really clean, but I know we can make the time and I know we can jump clear, so now we just need to do it all together.”

Red Hills proved to be a banner weekend for Selena and Woody across the board. Yesterday they were one of only two pairs to catch the optimum time on Mike Etherington-Smith’s cross country course, becoming the only pair in the 21-year history of the event to ever make the time twice in the CCI4*-S. Selena is the only rider in history to catch the optimum time in the CCI4*-S on three different occasions.

The countdown is on for March 31, when Selena and Woody fly across the pond and begin the journey to competing at the Mitsubishi Motors Badminton Horse Trials for a second consecutive year.

There were just four clears inside the time out of 19 show jumping rounds (21% of the field) in the CCI4*-S. Clayton Fredericks and FE Ophelia, a 12-year-old Zweibrucker mare (Ocordo X Argentina, by Argentina) owned by Diana Crawford and Hugh Wrigley, delivered one of the clears to finish second on 38.9.

Click here to view final scores in the CCI4*-S. 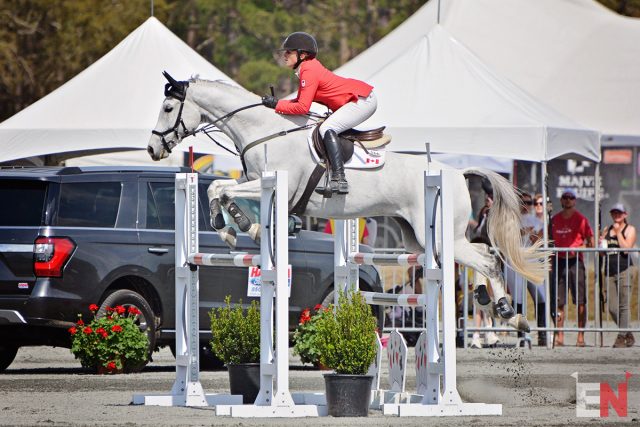 Jessica Phoenix defended her overnight lead with a clear round aboard Bentley’s Best to take the win in the CCI3*-S on a final score of 29.0, the only finishing score in the 20s in the division.

“Benny,” an 11-year-old Trakehner gelding (Hirtentanz X Hauptstutbuch Baronesse XIII, by Eichendorff) owned by the Bentley’s Best Group, led from start to finish, and Jessica said he was on his game all weekend.

“In dressage, he really feels like he’s finally strong enough physically and content mentally. He feels happy and playful, and it’s starting to get easy for him. He genuinely feels like he enjoys his job,” she said.

“He was so much fun to ride cross country. He nailed everything. Show jumping is always really fun for him. I had the last fence down on every single horse in the three-star, but I couldn’t be happier with how they all performed.”

Looking to the rest of the CCI3*-S leaderboard, 20 out of 43 combinations jumped clear show jumping rounds inside the time for a 47% clear rate.

Hannah Sue Burnett and Lukeswell, a 14-year-old Irish Sport Horse (Puissance x Gentle, by Kings Servant) owned by the Lukeswell Partnership, jumped clear to finish second on their dressage score of 31.5. Fun fact: This horse went around the 2015 Blair European Championships with his former jockey, Sam Watson, as part of the Irish team.

Click here to view final scores in the CCI3*-S. 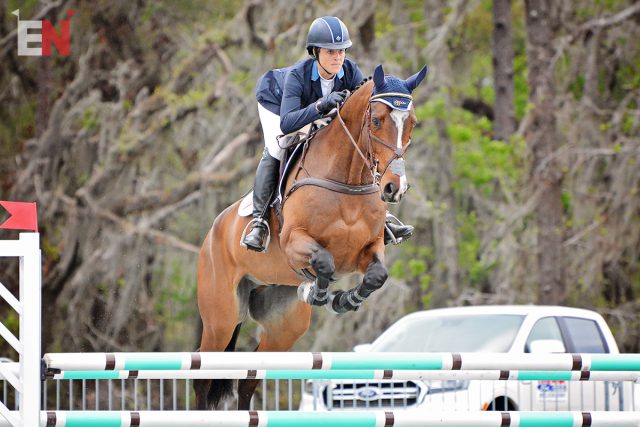 Rails went flying in CCI2*-S show jumping, with just six clears inside the time out of 38 rounds (16%) over Chris Barnard’s course. Lynn Symansky delivered under pressure as the last to go aboard KC Eventing’s Global Cassero 3 to take the wire-to-wire win on 25.2.

Lynn and “Jerry,” an 8-year-0ld Hanoverian (Conteur X Wahida, by Windauch), have been partnered together since January. Katherine Coleman thought the two would be a good match, and she was absolutely right, Lynn said.

“He made my job very easy, and he’s gotten a lot stronger over the last two months since we’ve been together. He’s been a late bloomer in his body, but he knows his job, and he’s so eager and wants to please and be careful. He’s still developing strength, but he tried his heart out.”

Jerry will move up to Intermediate following his win at Red Hills, but Lynn has a much bigger picture in mind for the horse. She is actively looking for syndicate members who might be interested in joining her with producing this horse for the future.

“He was class all weekend. I’m looking to secure him because I think he’d be a really good horse for the future as a potential team horse down the line,” Lynn said.

“I’m looking to grow a string because I have some older campaigners coming up on the last years of their careers. You always have to be looking to what’s next and not rest on your laurels, which is why I want to develop a syndicate to try to keep the ride.”

Christina Henriksen and JTH Zest, her own 8-year-old British-bred mare (Zamboucca X Maybee Baybee, by Mayhill), had one rail down to finish third on 29.6.

Click here to view final scores in the CCI2*-S. 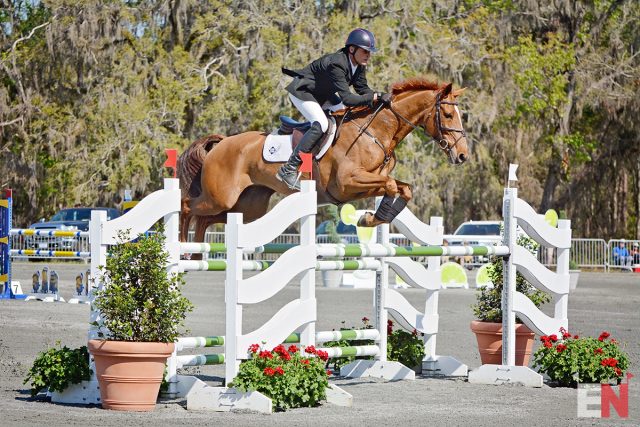 Looking to the National divisions, Boyd Martin bounced back from a broken collarbone to win the Advanced with Christine Turner’s Kyra on 32.2. Click here for the full report on Boyd’s win and why he thinks the injury might have been a blessing in disguise.

Zach Ketelboeter and his own That Hit the Spot, a 9-year-old Thoroughbred (A Spot of Greatness X If Girls Could Fly), added one rail and 0.8 time penalties to win the Preliminary Rider division on a final score of 44.9.

Thank you to all who followed along with EN’s coverage of Red Hills this weekend. This truly is a community event run by wonderful people who are delighted to welcome you back year after year. More than 600 volunteers make this event possible — thank you to every single one of them. Go Eventing. 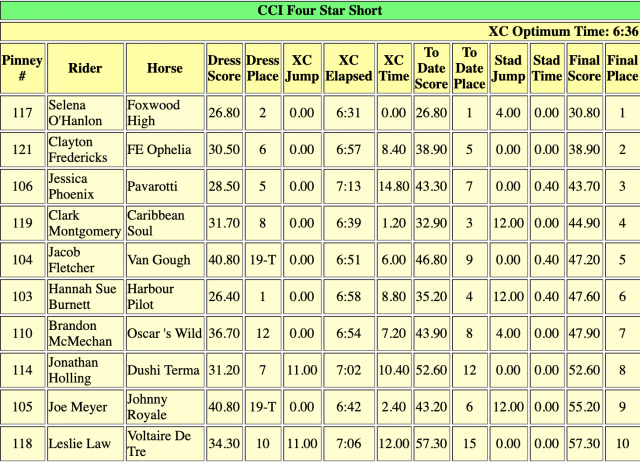 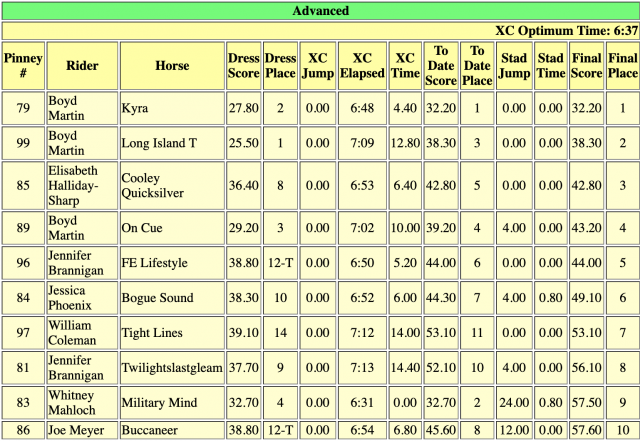 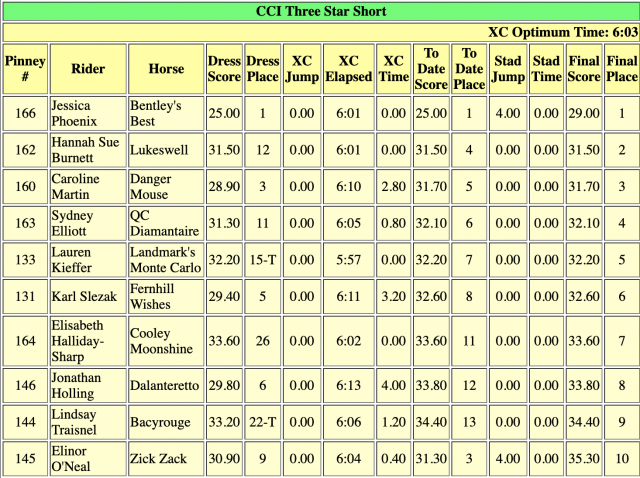 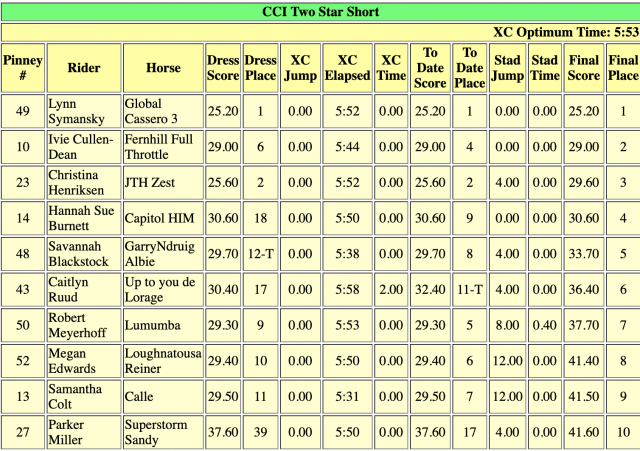 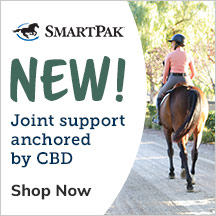