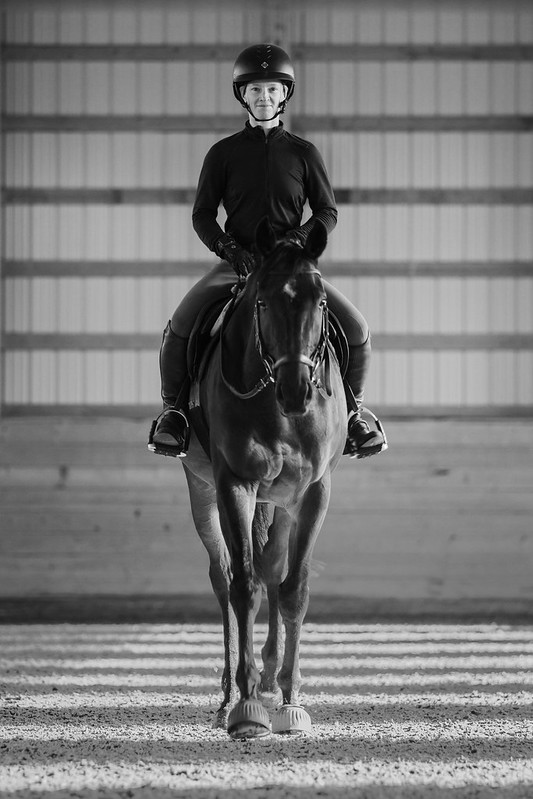 Remember this name. She may have come to the sport of eventing a bit late, she will make herself known in short order.

Courtenay grew up in Southern Maryland and the only thing she thought about, besides school, was horses. A great friend of her mother’s owned a Thoroughbred training and breeding farm just “ down the road”. Courtenay got the chance to ride many very nice Thoroughbreds. She was able to gallop the horses in training for the race track, restarting race horses into sport horses, and fox hunting some of the retirees.

When it was time to go to college at the University of VA, she had enough credits from her A/P classes that she could ride three horses a day and also work at a coffee shop. To keep really fit Courtenay started running, and to her surprise she loved it and was good at it. Unfortunately she got injured and had to step away from running.

After graduation she moved to San Francisco where she discovered bicycle racing and triathlon. The next 12 years she spent traveling the world racing professionally and going to graduate school. This gave her great knowledge of training the body. How to rest and recover, how to be competitive and how to win. She won races at every level and distance she attempted including the marathon. By 2014 her body started to wave a white flag.

It became clear that she was not going to be able to achieve her goal to run an Olympic Marathon Trials qualifying time. 2014 turned out to be a big transitional year. Courtenay left professional racing, married an amazing man and found horses again. Many of Courtenay’s friends would invite her out for a hack, but she would always turn them down. Courtenay doesn’t love horses just to ride. She loves building the partnership with the horse that comes with time and devotion.

Lucky for Courtenay a friend invited her to ride her horse. This time Courtenay did say yes. Wally, an upper level event horse was rehabbing from an injury. That lead Courtenay to start to research TB bloodlines for eventing, browsing websites for OTTB rehoming, reading everything she could about the sport and what it entailed, and looking for horses in need of exercising.

This browsing, learning and exercising went on for several years.

In 2016 Courtenay and her husband moved to to Calgary, Alberta, Canada, for his job. In Calgary Courtenay found Canadian Olympic eventer Sandra Donnelly and her Alborak Stable, which is on 800 stunning acres in the foothills of the Canadian Rockies.

In early 2017 Courtenay saw a big brown gelding with a bowed tendon on the CANTER Maryland trainer listings. She was struck by lightning. She was 2500 miles away and in a different country. So of course she called her mom. Her mother and TB trainer, Christy Clagett, went out to Hugh McMahon’s shedrow at Laurel Racetrack to look at this horse, BA Messenger ( Bam for short).

Her mother ask if there weren’t horses in Alberta. Courtenay‘s response: “Yes, but not this horse!”

So Courtenay took the risk and bought the injured horse she had never ridden, or even met, without a pre-purchase exam, right off the track. But she believed in his pedigree, conformation, and her gut.

As all good husbands, Courtenay‘s husband asked what she would do if Bam didn’t like to jump. Her answer, “Then we will do dressage, but I think he can jump!”

Courtenay believed in herself, even though she had spent many years out of the saddle. She spent those years as a top athlete with skills that would transfer well to eventing. Thanks to bike racing she has quick reflexes, good balance, the ability to make fast tactical decisions, mental toughness, good body awareness, a powerful work ethic and a holistic approach to training.

For Courtenay the risk paid off. She has been fortunate to have access to wonderful coaching. Courtenay has progressed from Novice to Preliminary in three years. Bam is turning out to be that horse that is willing to do whatever Courtenay asks of him. Whether it is getting on a trailer at 5 a.m. in the dark, cantering around tackless with Courtenay on his back, or jumping a hanging log into water at the Red Hills Horse Trials. Courtenay asks and he is willing.

This sounds like her rise in this sport has been easy; it hasn’t. Courtenay has had a few rookie mistakes. Like the time she knocked out her front teeth when they did a drop into water because Courtenay didn’t understand yet how to ride a fence like that. Or Courtenay and Bam’s first Prelim in the rain, that ended prematurely with a crash on the cross country because she under estimated the appropriate stud size for the conditions. That fall took some time for Bam to recover physically and Courtenay emotionally.

Courtenay and Bam spent the 2021 winter season in Ocala, Florida. Making the decision to leave Canada and go to the States was a bit difficult because of COVID. But Courtenay believed that was where she needed to be for her riding and Bam’s education.

Thanks to her trainer, Sandra, in Calgary she recommended Jonathan Holling for instruction. Courtenay was worried that she wouldn’t fit in with this stratosphere of eventers. She remembers driving up to Jonathan’s farm in Ocala and at the entrance there is this massive bronze statue of Jonathan on a jumping horse and there were all these big rigs and fancy horses. Meanwhile, she is in riding clothes she got at a consignment store, driving a 20-year-old truck and trailer and owning one saddle, a jump saddle. Oh, and riding a free off the track thoroughbred. Yeah, Courtenay was feeling a bit nervous.

But she was wrong. The entire farm was welcoming and horsemanship was the priority.

Courtenay and Bam worked hard and showed hard. By the end of season they finished fourth in a competitive Preliminary division at the Ocala International Festival of Eventing (still in her jump saddle).

You will be happy to know her new dressage saddle has finally arrived.

Courtenay Tuxhorn, I believe, will enjoy this sport of eventing for a long time. Keep an eye out for her. She is fun to watch.