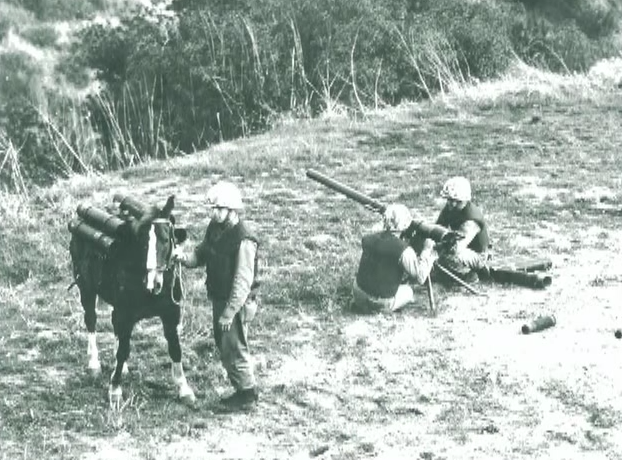 Sgt. Reckless in the Korean War. Screenshot via video from www.sgtreckless.com.

We honor and remember war heroes of all varieties on Memorial Day, and in the horse community, Sgt. Reckless stands out as the greatest of equine war heroes. Reckless joined the Marines during the Korean War, when Lt. Eric Pedersen bought her from a young Korean boy for $250 so she could carry ammunition during battles. She dedicated herself to her job so fiercely that the Marines quickly accepted her as one of their own.

During the five-day Battle of Outpost Vegas in March 1953 — largely considered the most intense in Marine Corps history — Reckless made 51 trips, many of them by herself, from the ammunition supply point to the firing sites. In all, the little mare carried 386 rounds of ammunition — 9,000 pounds or almost five tons — walking 35 miles through enemy fire that came at a rate of 500 rounds per minute.

Reckless also carried wounded soldiers down the mountain to safety, and she served as a shield for the Marines, who threw their own flak jackets over the mare to protect her. She was wounded twice in battle and received a Purple Heart for each of her injuries. Her military decorations also include the Good Conduct Medal, Presidential Unit Citation with star, National Defense Service Medal, Korean Service Medal, United Nations Service Medal, Navy Unit Commendation and Republic of Korea Presidential Unit Citation, all of which she wore proudly on her red and gold blanket.

She was twice promoted to Marine Staff Sergeant during her service to the Corps, first by Col. Richard Rothwell in 1957. Her second promotion came in 1959 by Gen. Randolph McCall Pate himself, the commandant of the entire Marine Corps. Sgt. Reckless will always be remembered as a true American war hero, and she deserves just as much recognition as any other hero on this Memorial Day.

Go Sgt. Reckless. Check out her website for more information.