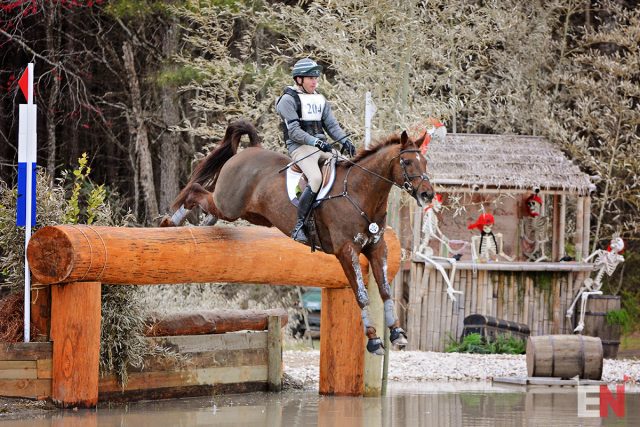 Shout out to Ryan Wood, who had Woodstock Bennett back at the CIC3* level for the first time since 2016. Welcome back, Bennett! Photo by Jenni Autry.

Hello, fabulous EN readers! This year I’ll be starting a new column in which I bring you behind-the-scenes tidbits from events that might not have made it into EN’s actual event coverage. Feel free to pepper me with questions in the comments if I don’t address a topic that has you scratching your head.

Many questions can often be answered by scrolling through EN’s live cross country updates. I run these updates live on course from my phone in the hopes of bringing readers the most up-to-date information possible.

Let’s dive right in to what you need to know following the Cloud 11~Gavilan North LLC Carolina International, held March 22-25 at the Carolina Horse Park in Raeford, North Carolina.

Kim Severson has received a clean bill of health following her fall with Cooley Cross Border when he left a leg at fence 12A, the hanging log jumping into the first water on the CIC3* cross country course. Both her head and neck scans came back clear. It goes without saying we are extremely relieved both horse and rider are OK. Cooley Cross Border is next entered at The Fork CIC3*, with a plan to aim for a return trip to Kentucky CCI4*.

Caroline Martin is nursing a battered foot following a run-in with a stud in Cristano Z’s hoof when they fell at the first water on Advanced cross country. The horse made a valiant effort not to trample her when he scrambled to his feet, but unfortunately he stepped on her foot. Cristano Z is absolutely fine after the fall. We are putting every possible positive vibe into the universe that Caroline can heal quickly. She has Bramham CCI3*-Under 25 on her spring schedule … and it’s one she can win.

Lynn Symansky was battling a painful pinched nerve in her neck when she had her “brain fart” with Donner in the CIC3* show jumping. She jumped a beautiful clear aside from missing fence 11, which resulted in technical elimination. The ground jury kindly allowed her to run hors concours (HC) around the Intermediate cross country so Donner could get the run he needed ahead of The Fork at Tryon CIC3* and ultimately Kentucky.

Katie Ruppel and Foreign Affair both were uninjured in their fall in the second water on the CIC3* course, which occurred when the MIM clip on the top rail of 19A failed to activate. The USEA Cross Country Safety Task Force and Carolina officials are reviewing the incident to determine why the frangible technology failed to deploy.

“There has got to be a better way to build a more reliable frangible fence,” Katie said. “Hopefully my fall can be used as a way to study these fences and safety devices to ensure that they will engage properly in the future.”

Chris Talley and Sandro’s Star were having a foot perfect round in the stallion’s CIC3* debut when they fell at the first of the open corners at 20A, the penultimate fence on course. Both horse and rider are OK. It was a heartbreaking end to a class performance from Chris and the horse, both of whom impressed across all three phases.

Antonio Salazar, who owns Sandro’s Star with his wife, Hannah, said it best: “Be strong, be fearless, and believe that anything is possible when you have the right people there to support you. You two did great this weekend, so keep your head up and move forward.”

Cosby Green and Highly Suspicious are both OK following their fall at fence 4A, a cordwood table, on the CIC2* cross country course. She has a few bumps and bruises and thanked everyone for checking in on her. Chin up, Cosby!

Many poignant quotes never make it into print. One that stuck with me came from Katie Coleman, Will Coleman’s better half and super groom, when she spoke about Off the Record. “Timmy” won his Advanced debut at Carolina, and in speaking about his personality, Katie said: “You either love him from the first time you handle him, or you learn to love him.”

Doesn’t that say so much about a life with horses? Each one has his own unique personality, with a slew of quirks and oddities just waiting to be discovered and ultimately appreciated, perhaps even adored. Cheers to the odd ones — they are often the most special!

Until next time … Go Eventing.