Charles Caramello is John H. Daniels Fellow at the National Sporting Library and Museum in Middleburg, Virginia and kindly submitted the following essay on Federico Caprilli, the Italian cavalry officer who revolutionized cross-country riding and jumping circa 1904-06, and his star student, the cavalry officer Piero Santini. This is a remarkable account of the evolution of the “forward seat” over fences that is so natural to riders today. To read part one of this essay, click here. Enjoy! 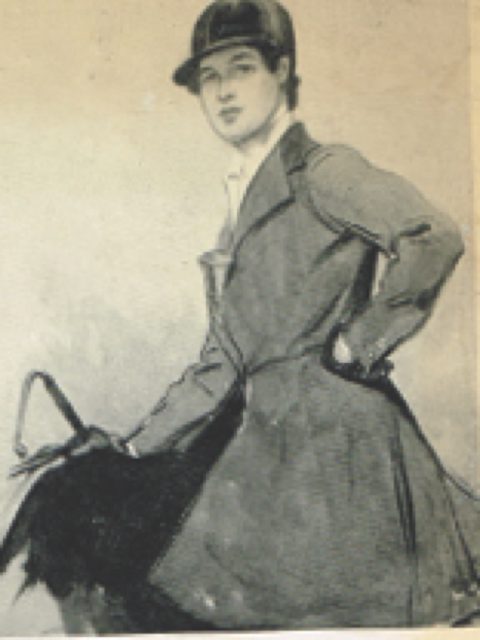 Following Santini’s death in 1960, Lida Fleitmann Bloodgood, a highly versatile and distinguished horsewoman, author of four books on equestrian subjects, and Santini’s “lifelong friend and collaborator,” published Santini’s and her collaborative project, The Horseman’s Dictionary.5Some years later, Bloodgood also played a hand in the serial publication in the U.S. of Santini’s translation and edition of Caprilli’s notes on equitation, and on their subsequent book publication as The Caprilli Papers. While The Horseman’s Dictionary is an anomaly, in both subject and format, among Santini’s works, The Caprilli Papers is a fitting and almost inevitable capstone to them.

The dust wrapper of The Horseman’s Dictionary described it as “a dictionary, not an encyclopedia. It confines itself to the precise meaning, or variety of meanings, of equine terms.” It offers brief definitions, in short, not long explanations, and it contains, by my count, some 3,000 separate entries.6As Lieut.-Col. C.E.G. Hope notes in his Foreword, “the special idioms and linguistic usage” that evolve in “every sport or occupation” are “more complex” in horsemanship “because every brand of horsy activity seems to have its own language.” Reflecting this diversity of activities and Babel of tongues, The Horseman’s Dictionary ranges across almost all disciplines.7

Bloodgood and Santini likely intended their dictionary to be read, and not only consulted. Most definitions, that is, are simply useful, such as Equitation: “The art of riding in all its branches; not as sometimes supposed, limited only to dressage and high school.” And so are most distinctions, such as between Horseman and Horsemaster. Many definitions, however, also are colorful, such as for Leaping powder; Jumping powder: “Strong drink taken to induce courage before a hunt or race.” And many terms are charming if only because arcane, such as Singular: “A boar upwards of four years; usually one that, having left the sounder or herd, travels alone and is accompanied by a young boar called its ‘esquire.’”

Santini employs his wit here as in previous works, in other words, both to delight and to instruct (likewise the equally sharp-witted Bloodgood). In addition to being colorful, definitions are accurate, informed, and concise, and a large majority of the words defined are still in use; they augment and sharpen a reader’s working equestrian vocabulary. The many words no longer in use, often pertaining to carriages and other conveyances for the Road, open windows onto the past; they enhance a reader’s knowledge of equestrian history. And since most amateur equestrians practice one discipline, the range of terms broadens a reader’s disciplinary perspective.

The Dictionary, finally, offers two noteworthy homages. In one, Santini again defends his Master: Prix Caprilli: “Dressage test at International competitions and Olympic games. Mis-named after the famous Italian cavalry officer, Federico Caprilli, who first evolved the Italian forward system of riding entirely opposed to dressage.” And in the other, Bloodgood honors her collaborator: Santini, Major Piero: “Famous Italian Cavalry officer who . . . introduced the Italian forward seat to the English-speaking world. His works now being a standard on this subject.” The entry carries a footnote: “The above entry re Major Piero Santini was made by the Co-Author, L.F.B. after his death on August 28th, 1960, in Rome.” 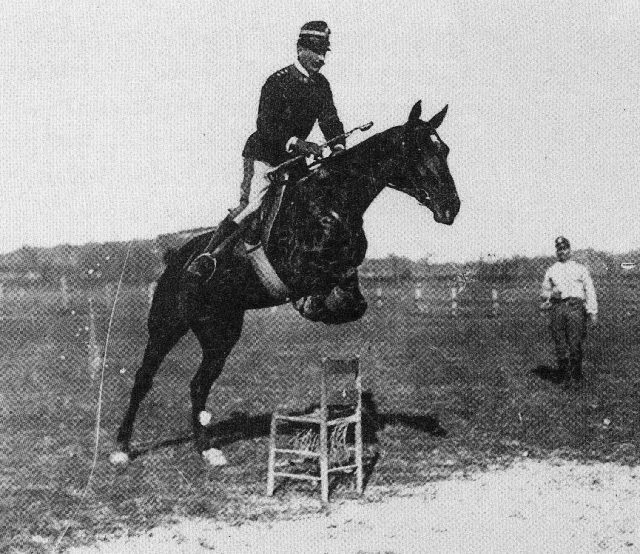 A very different kind of book, The Caprilli Papers is a slim and elegant volume that derives its considerable importance from the rarity of its contents: Caprilli’s words. Like “his spiritual ancestor Pignatelli,” Santini had written in The Forward Impulse, “Caprilli had an antipathy to writing only second to his dislike for walking.” As a result of that antipathy and a short lifespan, Caprilli published very little writing—astonishingly little, given his eventual reputation as arguably peer to Federico Grisone in originality and influence.

Lieut.-Col. C.E.G. Hope, who also wrote the Foreword for this volume, notes that “the failure of Caprilli, himself no pen-man, to put his ideas on paper was corrected by the work of his devoted pupil and friend, Piero Santini, who became the Master’s intermediary and interpreter.” The Caprilli Papers, indeed, comprises substantial passages from Caprilli interleaved with frequently acerbic glosses by Santini. Here as in other works, put differently, Santini stands as Caprilli’s “intermediary and interpreter.”8If this has allowed generations of horsemen to hear Caprilli, it also has required them, in effect, to hear Caprilli through Santini.

Following a citation of sources, Santini devotes his Introduction to Caprilli’s sanctification.9He has undertaken this work to give Caprilli’s “epoch-making maxims . . . and their creator the place to which they have a right in the annals of world equitation”—a right earned by Caprilli’s rejecting “extreme collection,” the basis of horsemanship since the 16th century, and supplanting it with “unfetted [sic] extension”: the “rider’s forward poise is nothing more or less than its logical complement.” Not surprisingly, Santini dismisses tout court an American commentator’s association of Caprilli with Baucher and Fillis—“high priests of an equitation in extreme antithesis to the Caprilli concepts.” 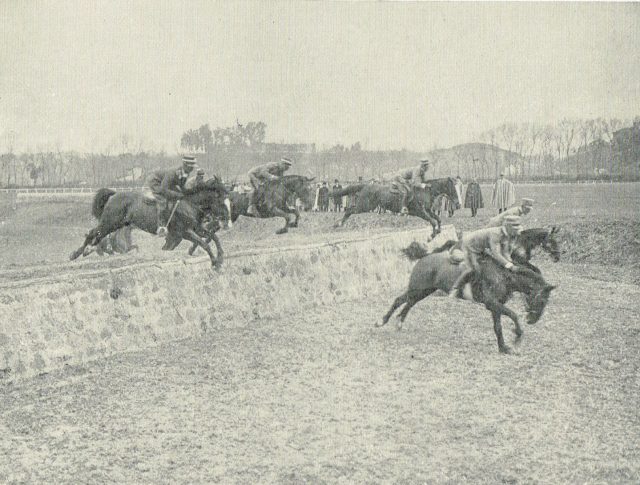 Consistency of position throughout changes of balance. The pianoforte at Tor di Quinto Cavalry School.

The text of the Papers comprises five short chapters. In the first and most trenchant, Caprilli lays out his principles for horse and rider “to get across a country with safety and dispatch . . . and with the minimum possible wear and tear”—the goal of both military and sporting equitation. The “fundamental, constant and unvarying principle” among these tenets is that a horse should “be persuaded, with firmness and energy, to conform to the rider’s wishes, being left, however, the liberty to do so as he thinks best.” Since the “greatest possible mistake,” moreover, is to form a horse “differently from the way nature fashioned him, with an artificially modified balance and forehand,” it follows that “manège and cross-country equitation are . . . antagonistic: one excludes and destroys the other.”

On that basis, Caprilli contends that the Italian Method of forward riding is the only correct method for instructing cavalrymen and training their mounts: “any other method is harmful and teaches artificial action, in direct opposition to the horse’s natural mechanics.” This leads to the corollary principle that “jumping is not an end unto itself but a means by which to apply practically the fundamental principles of our method.” As Caprilli later explains, “when the rider is capable, throughout the entire course of a jump, of smoothly conforming to the movement of his horse, he will have developed more than sufficient dexterity not to disturb him in anything else he may do.” Forward riding, in short, enables correct jumping, and correct jumping improves forward riding.

Though all of Santini’s works were illustrated, the plates in The Caprilli Papers, due in part to the brevity of Caprilli’s text, accrue importance and, in fact, do much of the work. In addition to a frontispiece portraying Caprilli on “Pouff,” the volume includes “40 illustrations from old and rare photographs collected by Major Santini.” Not simply “illustrative” (and numbering 26 pages to the text’s 40 pages), they constitute a coherent visual narrative that documents three periods in the development of the Italian forward seat: Pre-Caprilli Period (13 photographs), Transition Period (also 13), and Post-Caprilli Period: The Italian seat in its hey-day (14 photographs).10

The first two groupings tell the story of Caprilli’s development of the forward seat.11The third grouping, documenting the fully evolved seat in use, is the most visually arresting. It includes several shots of cavalry officers, in the forward seat, negotiating the formidable Tor di Quinto “slide,” including an image of the Cavalry School’s “last comandante, Colonel Francesco Forquet going down the ‘slide’ with his hands off the reins”—well forward and in control. This grouping also includes photographs from subsequent years of a number of officers, on magnificent horses, using the forward seat to attack huge jumps. It closes, fittingly, on a photograph of Piero Santini jumping “at the Salonika Front in the Great War, 1914-18.” 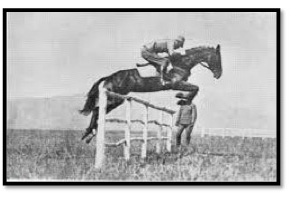 Major Piero Santini jumping at the Salonika Front in the Great War, 1914-18

Federico Caprilli revolutionized cross-country riding and jumping. Piero Santini, his apostle, studied, translated, interpreted, and disseminated Caprilli’s words and proselytized his vision and method. He is worth reading on that basis alone. Santini, however, also offers much more. A distinguished horseman who possessed a wealth of both theoretical and practical knowledge, he also was an impressive literary craftsman who conveyed that knowledge in elegant and limpid prose. Instructive and pleasurable, his work is well worth reading on its own terms.

Dressage and military equitation, moreover, have been intertwined for centuries, as have foxhunting and cavalry service, predominantly though not exclusively in Great Britain. More specifically, and more to the point of Eventing Nation, three-day eventing, originally called “le militaire,” evolved directly from cavalry training of horse and rider. Cavalry officers and chargers, troopers and troop mounts, defined and developed the skills subsequently honed by eventers. Mounted cavalry, as practiced by Santini, may be an anachronism, but its traditions, as advanced by him, are very much with us.12

6While many of the entries simply cross-reference terms, many others, with sub-entries, define multiple terms (the entry on Pelham bit, for example, defines 16 types, and that on Hunting jumps 35 types).

7To cite the title page, the Dictionary includes “over 3,500 words used on the Turf, in the Hunting field, Show-ring, Manège, on the Road, Trotting-track, Polo field, Ranch, and in the Stable or Stud.”

8Hope adds that “it was through [Santini] that he [Hope] “was privileged to publish in Light Horse in 1951 for the first time in English the only written précis of his theories left by Caprilli”—a précis that became “these ‘Caprilli papers.’”

9Santini writes that “in the compilation of the ‘Papers’ I have drawn on three sources,” namely two published pieces by Caprilli together with “the Notes which were to serve for a treatise on his system.”

10The volumes in Santini’s trilogy include numerous photographic plates (~42 in each of the first two volumes, ~30 in the third), plus diagrams, figures, and sketches. Though less cohesive as sequences than in The Caprilli Papers, the photographs often serve as points of departure rather than as illustrations of points. Photographs in Riding Reflections, for example, often juxtapose shots of military professionals with those of civilian amateurs—the latter shots “principally instructive [in showing] what should not be done.”

11The first grouping shows several horses being jumped in the “classical” style, with riders upright or leaning back and pulling on the reins; it closes with three photos of officers, in pre-Caprilli position, negotiating the “slide” at the Tor di Quinto Cavalry School. The second grouping follows a shot of Caprilli at the “birth of the forward seat” (1904) with four shots of him at a subsequent stage of its evolution and refinement (1906); it closes with further images of the seat in evolution, including an instructive pair comparing “the French Cavalry Officer de Lessard before and after he adopted the Caprilli position.”

12This essay revises and combines four blogs posted on Horse Talk (www.horsetalk.co.nz) in 2016-17.