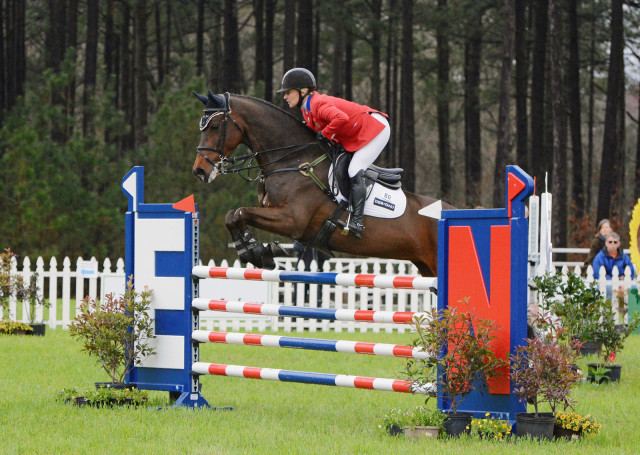 The competition isn’t over until the final fence is jumped, and Kyle Carter and FR’s Trust Fund put in a cracking show jumping round in the final phase of the Ocala Horse Properties International Festival of Eventing CCI2* before they dropped out of the lead when the last fence on course came down.

Kyle and “Finn” got lucky when they rubbed the fourth to last fence, the second fence in a combination of two verticals set four strides apart. They regrouped as they headed for the last three elements, and it looked as though they had the victory in the bag. But the third element in the triple combination, an oxer, fell out of its cups as the crowd groaned with empathy. Nevertheless, Kyle and “Finn” received warm applause as they exited the ring with a third place finish.

There had been very little breathing room in the final phase, with less than one rail separating the top five. Show jumping is often a bit tougher when run in the traditional format following cross country as the horses may be tired from the effort of the previous day, and rails were flying all day on Marc Donovan’s show jumping track.

With two horses in the top five after cross country, Marilyn Little jumped out of order with RF Scandalous, who was third overnight after posting a double clear cross country round. Having left all the rails up in her last five FEI appearances, it’s no surprise the 10-year-old Oldenburg mare jumped clear once again. Marilyn knew “Kitty” could finish no worse than third as she switched horses for her next round.

Although the scores show many rounds with multiple rails, there were eight double-clears among the ultimate top ten finishers making the margin of error increasingly narrower as the division wound down. 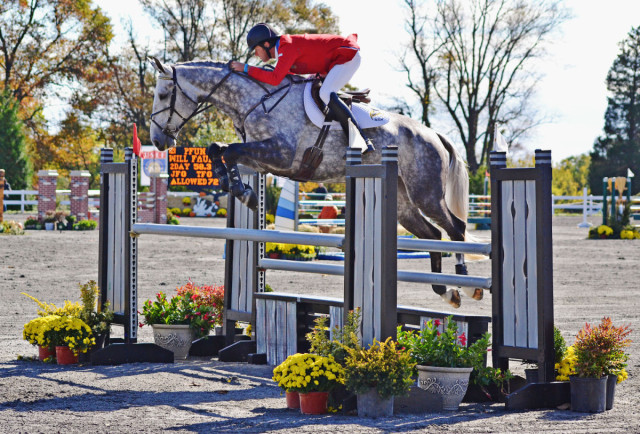 Will Faudree and Pfun at Fair Hill. Photo by Jenni Autry.

As we entered the top five, Jennie Jarnstrom, riding for Sweden, piloted a very keen Penelope to a clear round in the 8-year-old mare’s first CCI2*. They were assured a fifth place or better finish, but they moved up when Buck Davidson and Quasar had an unfortunate five fences down to fall from fourth all the way to 20th place.

Sitting in second after cross country, Marilyn returned to the ring once again with RF West Indie, the recent winner of the Carolina International CIC1*. The 8-year-old Hanoverian mare owned by Raylyn Farms is typically a very good show jumper, but she had one uncharacteristic rail, dropping to fourth and moving her stablemate RF Scandalous up to second with one horse left to jump.

When the final rail fell for Kyle and Finn, the victory went to Raylyn Farms and Phoebe and Michael Manders’ RF Scandalous. This was the mare’s first appearance at a CCI2* and her fifth consecutive FEI win since last October. In chronological order, her winning record is as follows: Galway Downs CCI1* (October 2014); Pine Top CIC2* (February 2015); Red Hills CIC2* (March 2015); Carolina International CIC2* (March 2015); and now the Ocala CCI2* to add.

After today, RF Scandalous likely is at the top of the selectors’ list for the U.S. Pan American Games team. In looking at other Pan Ams contenders, it unfortunately wasn’t Quasar’s day in the show jumping, and yesterday’s cross country was a tough go for several Pan Am contenders. Cooley Cross Border, the leader after dressage, picked up 20 penalties at the second water, and though he finished the course, Kim Severson withdrew him before today’s show jumping.

Will Faudree retired Caeleste at the second water with plans to re-route to Jersey Fresh. Will did, however, finish on his dressage score with the 8-year-old Irish Sport Horse gelding Pfun to finish in seventh place overall in the two-star. 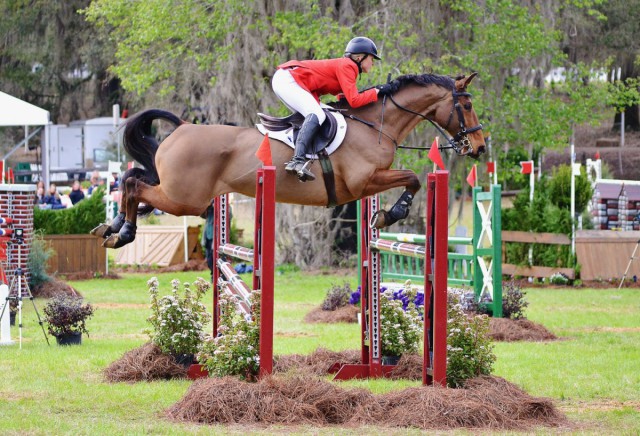 As for competitors from other countries hoping to represent their homeland at the Pan American Games, Mexico was well represented in the final results. Pedro Gutierrez and Racques Biats finished 19th overall, moving all the way up from 40th after dressage, and Daniela Moguel and Cecilia finished on their dressage score for a ninth place finish.

RF Overdressed, an 8-year-old Hannoverian, finished second to his stablemate RF West Indie at the Carolina International last month and was fourth at the The Fork last week. This weekend, it was the German-bred gelding’s turn to shine, as he led a field of 80 starters in the Ocala CCI1* from start to finish, adding nothing to his initial score of 37.0.

Now owned by Jacqueline Mars, Robin Parksy and Raylyn Farms, RF Overdressed had a successful one-star career in Germany before partnering with Marilyn Little. They competed in their first FEI competition together in February.

Second place Philippa Humphreys and Master Eli finished close behind on a score of 37.8. Eli’s boots were mistakenly left on during their dressage test, which is no longer cause for elimination under FEI rules. They incurred a 2-point penalty that kept them out of the lead, but were at least able to continue, and the 8-year-old Irish Sport Horse gelding put on a banner performance in all three phases.

Leslie Law and Maria Brazil’s Pas de Panique finished third in the Selle Francais gelding’s first FEI appearance. They were ninth after dressage with a 42.6 and jumped double clear on both rounds of jumping.

Will Faudree and Jennifer Mosing’s Socialite and Kelly Prather and Debbie Adams’ D.A. Calimero were tied on a score of 43.5 throughout the competition. Both pairs were clear on cross country and in today’s show jumping, but Will and the 7-year-old mare were 4 seconds closer to the optimum time on cross country, breaking the tie for fourth place. Kelly and D.A. Calimero received fifth place. 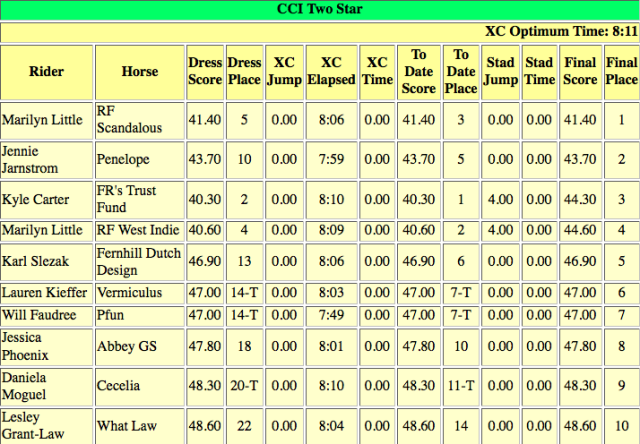 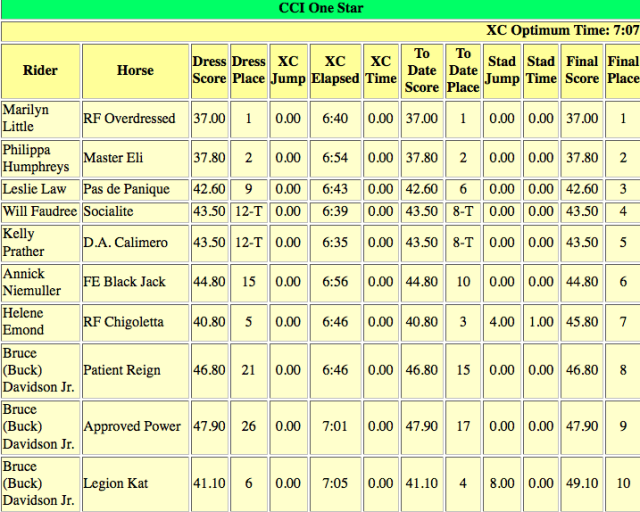