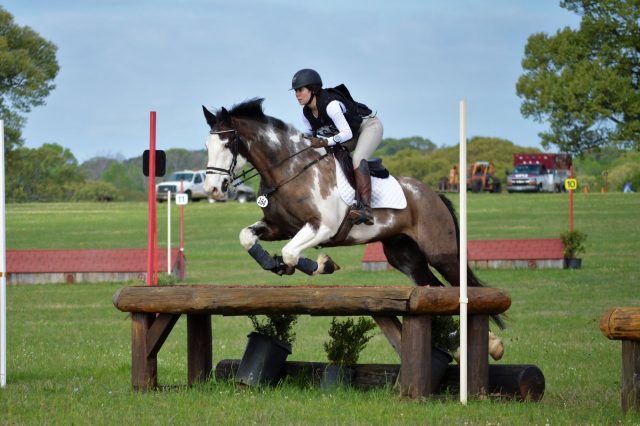 The 2018 USEA American Eventing Championships will take place at the Colorado Horse Park this September. Horses and riders across the country are making their final preparations as we head into the home stretch before the event. One horse that is sure to catch your eye one the cross country field is Sofia Del Aguila’s Percheron x Paint, Highlander. 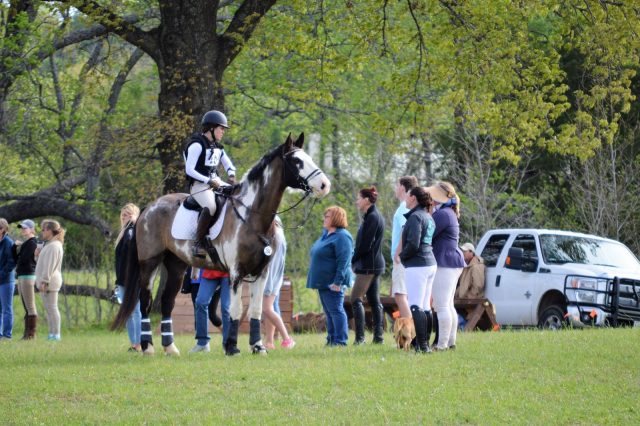 In a sea of bays, chestnuts and grays the 15-year-old black and white paint stands out from your typical eventing warm up arena, not to mention above it. The 17-hand gelding was originally bred to foxhunt but found his calling in eventing with owner Julie Lobaugh. Julie and Highlander competed through the Preliminary level and made appearances at several AECs of their own. Highlander became a familiar face and gained celebrity status in Area V. When Julie’s life became busy with children and young horses, it was time for Highlander to find a new partner to continue his eventing career.

Sofia Del Aguila learned the ropes of eventing on her Trakehner x Thoroughbred mare, Rumor Has It (Adele), and the pair competed from the Starter level through Novice. In 2017 they made the trip to the Bluegrass State to compete at Pony Club Championships at the Kentucky Horse Park. “I could not have asked for a better first horse,” says Sofia. But the 19-year-old mare had reached her limit at the Novice level and Sofia needed a new horse to move up the levels on.

Wanting to find a horse with experience at Prelim, Sofia struggled to find something she could afford. Life has a funny way of working out and the trainer of the family that bought Sofia’s mare knew Julie Lobaugh was looking for someone to lease her Prelim horse Highlander. Sofia called her own trainer to ask her opinion on the horse and her exact words were: “Call right now! You NEED Highlander, Sofia … hang up the phone and call NOW!” A few weeks later Sofia and her mom were driving to Dallas, Texas, to bring Highlander home to Houston. 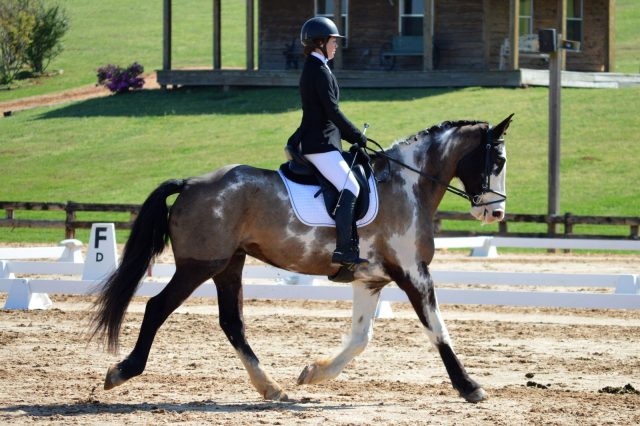 Highlander looking less dragon like in his dressage. Photo by Kate Boggan.

Sofia and Highlander have spent the last year getting to know each other, and as all partnerships do it has taken time for the pair to figure each other out. Sofia has been working to calm Highlander down in dressage where he “literally turns into a fire breathing dragon,” and adjusting to having so much horse underneath her. “The biggest challenge I’ve faced with him so far has been keeping control of his outside shoulder and keeping him straight. For such a big horse he is super flexible,” says Sofia.

Learning curves aside, so far the beautiful gelding has been exactly what Sofia had hoped for. “Most of my goals are to improve myself,” she says. “That’s the whole idea behind getting a horse with experience that you know is going to take care of you. That’s why Highlander has been great for improving my riding.” While Sofia is still learning how to manage Highlander’s excessive energy in dressage, she says the horse is an absolute beast on cross country. 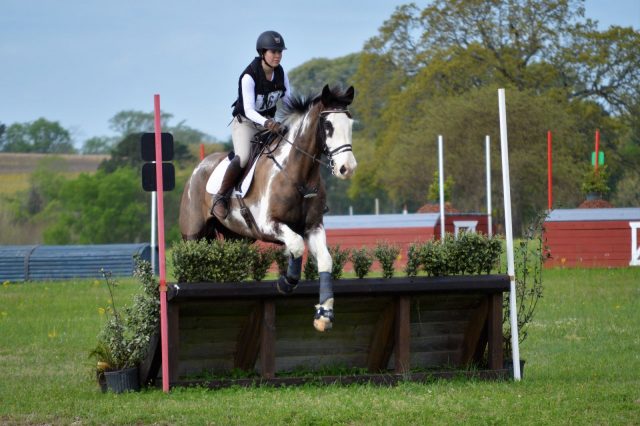 Highlander doing what he does best. Photo by Kate Boggan.

The pair moved up to Training level this past January and will be traveling to Georgia for the Chattahoochee Hills Horse Trials in July. Sofia and Highlander competed at both the spring and summer Texas Rose Horse Trials to qualify for the AEC and went to several schooling shows in the area to polish up their performance. Never having competed at an AEC herself, Sofia wants to feel that she has worked all the kinks out and that she and Highlander will make their AEC debut as a really competitive pair at Training level. 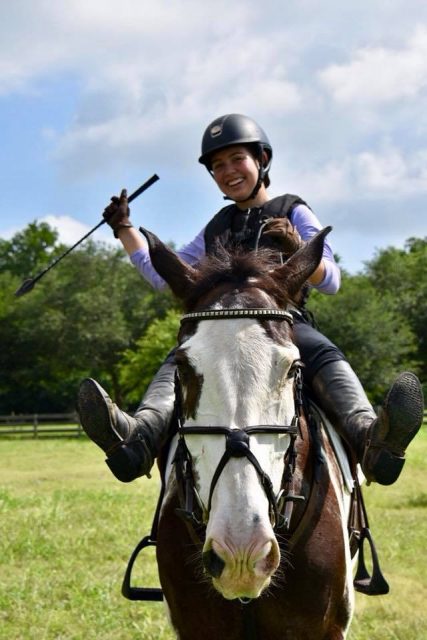 “He tolerates my goofiness.” Photo by Sarah Bonnaure.

When asked what her favorite thing about Highlander is, Sofia says: “His character. He’s such a goof and he tolerates my goofiness.” Sofia hopes to move up to Prelim within the next year and is grateful for the chance to learn from a horse with a “been there, done that” attitude. According to Sofia, “If Highlander could talk, on the daily I would get a ‘Dude, what are you even doing? Chill! I know what to do.'”

In a little over two months competitors from across the country will be arriving at the Colorado Horse Park for the 15th annual AEC. While enjoying the beautiful views and spectacular displays of horsemanship, make sure to keep your eyes peeled for Highlander and Sofia. She’ll be on the big black and white paint, wearing the biggest smile out there.