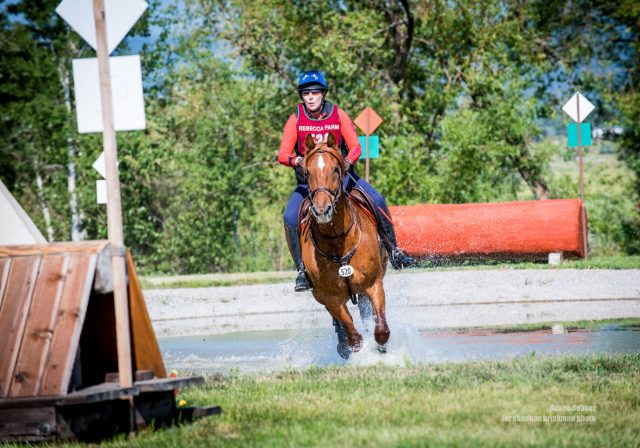 As our favorite time of the year approaches, Rebecca Farm, I reflect on the love for a big red draft cross named Danny Boy. He isn’t a big sexy warmblood, or a fast OTTB. He wasn’t really planned much or the product of a sophisticated breeding program. He is simply a steady, adorable, stubborn, athletic lower level eventing horse.

I am a late bloomer and just started riding, at all, six years ago at the age of 44. I starting off competing at low level hunter/jumpers and then moved to eventing when my friend Krissta convinced me how much more fun it was. Unfortunately, I made several bad decisions about horses in my first three years and finally realized the green horse, green rider model didn’t work. Crying in my trailer once again after my most recent unceremonious dismount, I was at a critical decision point. Give up this crazy sport that had smitten me or find a horse that could teach me how to be an eventer.

I am so thankful that I chose the latter. That is where the big red draft horse comes in. Discouraged with horse shopping after repeatedly not being in the right place at the right time to get the low level “packer” I was in such desperate need of, I got wind of Daniel. Within 48 hours, I was on a plane to Georgia, and within 20 minutes of meeting Daniel, I knew he was the one.

What I didn’t know at the time was that bringing him back to Montana was more than a financial transaction. I had to cut the mustard with his girl, Hannah and her entire family, the Ledfords. Thankfully, I passed the pre-purchase exam and so did Daniel. Not only did I get to bring Daniel home, but I also inherited an extended family in Georgia.

On July 3, 2016, the big red beast was in Montana. Daniel has taught me so much over the last three years, and I am on the verge of being able to move up to Training level — a division I never thought I would be able to compete in. Moving up is exciting, but comes at a price. I can’t move up with my Daniel. Daniel isn’t ready to retire, but he is wanting to ease slowly into semi-retirement. With a new horse at home, another naughty redhead named Harley, to work on moving up, where does Daniel fit in? I love him with all my heart and could not bear to part with him. He has been such a blessing to me, it was time to share him.

Share him with Rachel, my trainer’s working student who rode him for a week and then won her Novice division at Copper Meadows. Share him with Nick, a lower level hunter/jumper, who rides him twice a week and at his first big show won four ribbons and was the reserve champ in the 0.7m jumpers. And finally full circle, share him once again with Hannah, his Georgia Girl.

Harley and I will be headed to Rebecca, but Daniel wanted to go again too, at least one more time. At 18 he is amazingly healthy, but none of us know how many more Rebecca’s he has in him. As an inexperienced adult amateur, the idea of riding two horses at Rebecca seemed too daunting. Hannah is now off to college, but has dreamed of riding Daniel at least one more time, and has always dreamed of riding at Rebecca Farm.

Every Rebecca Farm, I have ever been to has been special, either as a spectator or a rider, but this year it will be even more so. That wonderful big red chestnut draft cross that I call Daniel, because he is older and more sophisticated now, and Hannah calls Danny will compete at Rebecca Farm with his Georgia Girl. Daniel/Danny is Hannah and my heart horse and I am so grateful that we get to share him. I dream of Harley and I nailing our dressage test, unlikely, going double clear and winning my division at Rebecca. But even more so, I can’t wait to cheer Hannah and Danny on. Daniel/Danny is a gift and being able to share him with other riders that need his confidence, steadiness, goofiness and love is just another blessing he has given me.

Daniel is very special, and the best horse ever if you ask Hannah or I, but there are lots of Daniels in the eventing world. Horses that will never be upper level stars or Olympians, but horses that make our hearts sing, and our lives more full because we knew them. Thank you to all the Daniels out there and especially my Daniel.

Daniel and his people: 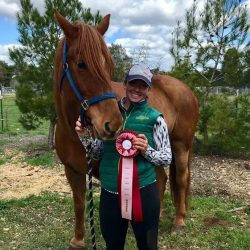 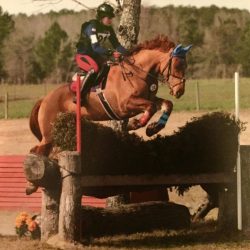 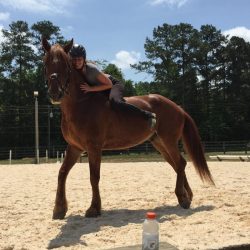 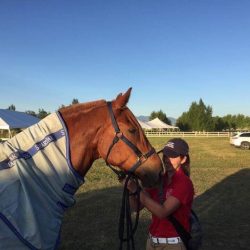 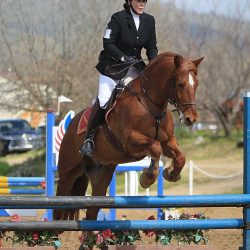 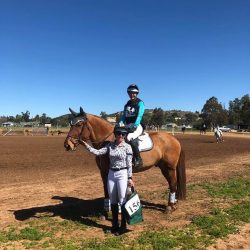 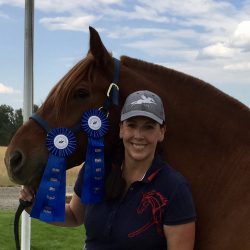 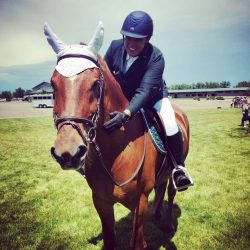 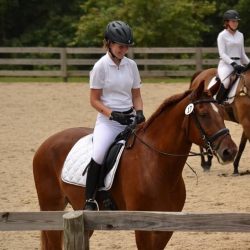 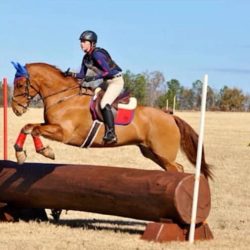 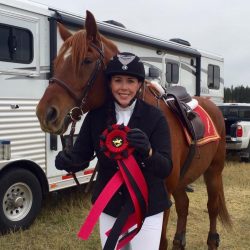