For 616 accepted trainers, the journey to the Retired Racehorse Project’s 2020 Thoroughbred Makeover and National Symposium, presented by Thoroughbred Charities of America, has begun! The 2020 event will take place at Oct. 7-10 at the Kentucky Horse Park. Between now and then, three trainers plus one team of four trainers will be blogging their journeys, including their triumphs and their heartbreaks, successes and failures, for Eventing Nation readers.

Last month, we met a team of four trainers from Dappir Ridge Eventing in Charlottesville, Virginia. Any journey is more fun when you’ve got buddies by your side! We’ll lead with Adriana Nannini’s update — be sure to check out her website here. 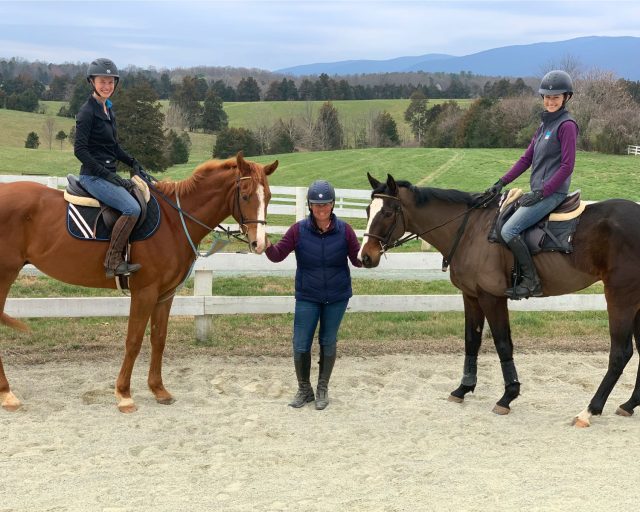 Amidst all of this Coronavirus craziness, both of my places of employment have closed their doors; the high school that I work at as well as the restaurant. Kiki, knowing that I would be needing some way to occupy my time, invited me to come ride sets with her and Alex in the mornings.

Bringing along this group of baby OTTBs really feels like a team effort, and I’m proud to be a part of it. I have very much enjoyed experiencing each of their unique personalities and figuring out how to adapt my riding to each one! Call Triple A aka “Buddy” and Baltic Art aka “Thor”, for example, are true steady eddies. They take a decent amount of leg, are willing to please, and are both nearly bombproof. Hunter’s Dream aka “Fox” is a dreamboat and I’m in love with him. He is super sensitive, but naturally balanced, athletic, and is going to be very fancy. It took me a hot minute to figure out how to ride him, because of how sensitive he is to the leg, but once I did, I fell in love with him. Alex has done such a nice job with that one.

And then there’s Sevennotrump, aka “Tricks” or “Trixie”. He is really living up to his name; he’s like a mischievous little boy! At first, his biggest struggle was steering. He would bulge his outside shoulder and run sideways with all 4 legs flailing in 4 different directions, mouth wide open and tongue hanging out the side of his mouth. Really attractive, as you can imagine. Now, at long last, it appears we have overcome that unbecoming phase of life and have figured out how to steer and go [mostly] straight.

Tricks is actually quite soft and light in the bridle, and loves to stretch down, which is quite nice. The canter is simply divine. It is so rhythmic and naturally balanced, you could sit on it all day long. He is not your “typical” hyper-sensitive OTTB. Quite the contrary- he actually takes quite a bit of leg! While Tricks still occasionally has little baby temper tantrums, he is overall such a pleasure to ride; he is comfortable, willing, and has no shortage of personality!

When we first started Tricks over little jumps, he had no idea what to do with his long spidery legs, and was basically a hot mess. So Kiki and I decided to take him on his very first field trip, to a jump chute clinic with Martin Douzant. That clinic was a real lightbulb moment for his little brain.

Now, he trots around little courses of crossrails and small verticals happily and in a [mostly] coordinated fashion! Tricks has also been on two field trips down the road to Dappir Ridge’s other facility. He has been relaxed and well-behaved on his outings, where he has worked both in the ring and hacked out on the trails there. He even navigated his very first water crossing out on the trail! 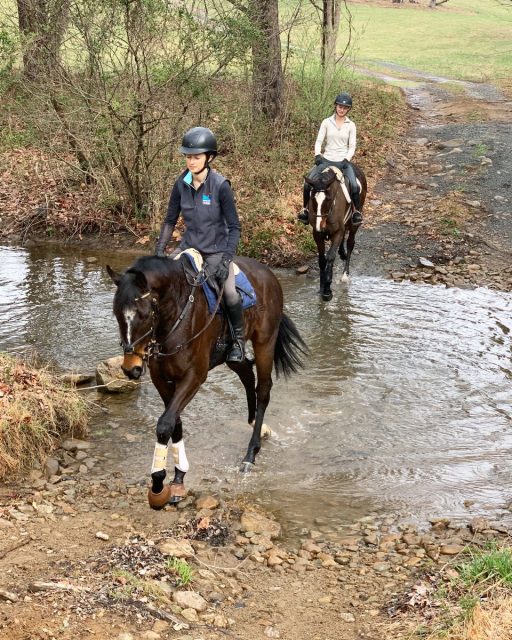 Robbie Jones is a remarkable horse. He is sensible, smart and willing but like any young, green horse we have faced a few challenges these past couple months. The first and only “bad” thing Robbie did was bolt. He did this a few times when he was feeling fresh in the ring at Midway farm but since there was a fence around the ring I was able to stop him pretty quickly.

We moved him to Chapel Springs Farm (Dappir Ridge’s other facility) where the ring is in a large field with no fence around it. One day, I was riding Robbie there while Kiki was teaching a riding lesson. When the horse in the lesson trotted over a crossrail, we went from 0 to 60 in about three seconds and I had no steering or brakes and we were in the middle of a muddy field headed down a hill. Concerned that we were going to fall down I attempted a pulley rein and a one rein stop but Robbie locked his jaw and neck and did not want to stop or turn. Finally I took the left rein both hands and pulled with all my might and we came to a screeching halt!

After that day we spent a lot of time stopping, backing, turning and making sure I had tools to stop him if that happened again. He rarely does it now, but when I feel him start to take off I can now quickly turn him in a circle. The other issue we have sometimes is that I often come to ride after work when Robbie’s pasture buddies are turned out in the field next to the ring.

Robbie has told me several times that he really feels like he should be out playing with them and not working. Sometimes we have little tantrums which involve a lot of whinnying, prancing and generally ignoring everything I ask him to do. If he’s really not into it he will occasionally throw in a bolt or a little hop but thankfully he never rears or bucks! I try to think of this as a good training opportunity and not get frustrated with him. Most evenings I am able to work through the tantrums and get Robbie to focus and give me some good work.

So far Robbie has only been on one field trip- to the Farmington Hunt Club Combined Test at Millington Stables. He was a total rockstar! He went in the dressage ring for the first time ever, cantered his first whole jump course and came home with a blue ribbon!

Robbie seems to enjoy jumping and appears to be quite talented! I am looking forward to the future with him. 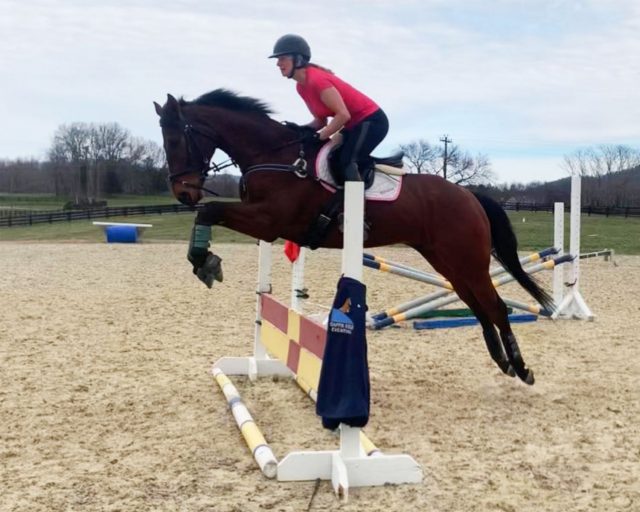 While I ride all of the baby OTTBs in the barn, my main project is Hunter’s Dream, aka “Fox”. Fox is sweet, willing, and very much an “old soul”. He is clever (like a fox!) over the little fences he’s starting to jump. He seems to really enjoy jumping as he bravely hops over most new obstacles he encounters. Fox is an absolute gem to hack out and trail ride, quietly handling all of the bikers and runners that share the road with him.

I took Fox on his first cross country school a week ago and was so pleased with his reaction to a large new environment. He encountered many scary jumps, including his first water complex! It took a long time to convince him the water was safe, and that there were no gators, but once he jumped in (literally) he splashed about in it the rest of the afternoon.

As willing as Fox is, he has his struggles too. He can be very tense and nervous, making it difficult to create and maintain a steady connection with him, especially when distractions are present. So we have been planning many field trips for him in order to expose him to new environments and experiences, and encourage him to relax.

Fox went to his first combined test this past weekend, and saw his first dressage ring! While we didn’t place, he did stay inside the dressage ring for his whole test!  He kept most of his wits about him even though he was very nervous, and jumped all of the jumps in his show jump round.

I am thrilled to be a part of this special guy’s growth, and excited to see what else he can do! 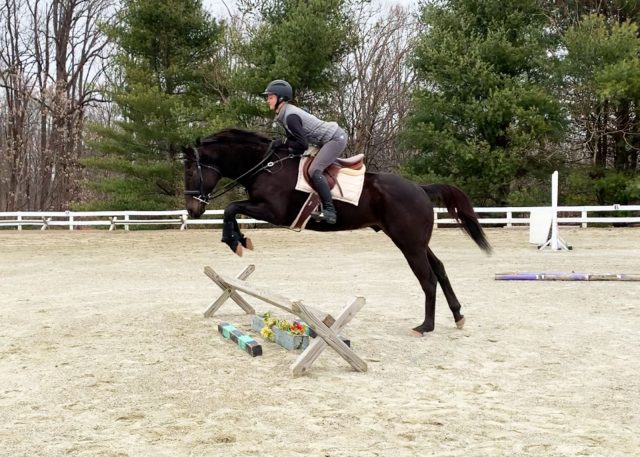 Since I have a hand in several of these OTTBs I’ll give a quick recap on a few of the others in our group!

Hands down, the most settled in his mind and self-confident is Baltic Art (“Thor”), but a close second is Call Triple A (“Buddy”). Both of these smart guys are not easily influenced by other horses’ behavior or attitude. I can easily hop on either one and go for a ride alongside a more excited, reactive friend, and they just stay their course and get down to business. Thor has been on a couple of field trips off the farm, and is always the same horse.

While he thinks it’s fun and interesting, he still demonstrates maturity and focus off the farm. His attitude makes it easier to teach him new things, like jumping! New gate? New plank? No problem! Although he still has a long way to go, his canter is beginning to get stronger in the sense that he is able to be somewhat more adjustable. Hills, Thor, hills….

Buddy also has a lovely brain, and I can’t stress enough how important that is! He too excels in his trot work, but struggles a bit in the canter. His left lead is much harder than the right, but slowly we are starting to even out the left and the right side. Because his canter still needs to develop more, we are holding off on starting him over fences for another month or so. He has done a bit of pole work, which I also hope will strengthen his back and hindquarters. But, like Thor- hills, hills and more hills!

Now to discuss Prince Attack (“Prince”), who is literally “the Prince”. He is the most juvenile of the bunch, (he won’t officially turn 4 until the end of May!) and is pretty much always out for a good time. He has recently started to show up for work more days than not, and he’s a pretty fancy boy with 3 lovely gaits and a good jump. Prince has gone on a field trip to the jump chute clinic, and definitely enjoyed himself.

He was a quick study on how to get himself out of the way of the rails. He also went on an adventure around the corner to a local farm. It took him quite a while to settle in with the excitement of several other horses being in the ring, but with the amazing Alex in the irons, he eventually took a breath and got to work. Our biggest challenge with Prince is channeling his mental energy, especially outside of the ring. I am so thankful to Alex and her patient and relaxed attitude with him. He gets better every day!

I’d say this crew is almost ready to go to a show and start to experience life with even more horse friends around. However, it looks like we are all going to spend our early spring practicing and traveling to local farms. This is never a bad thing to do with a group of youngsters! 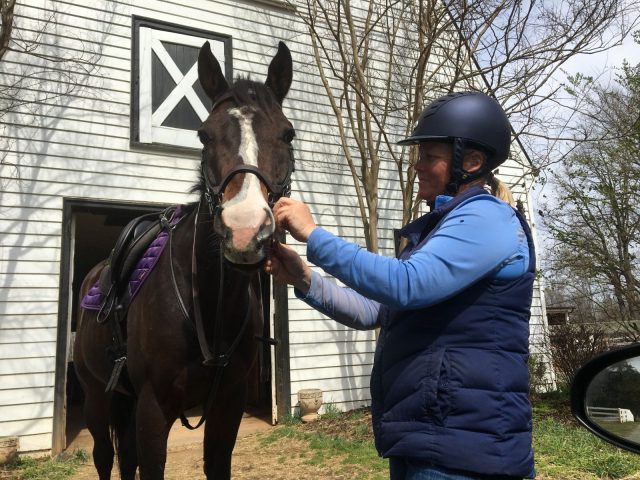