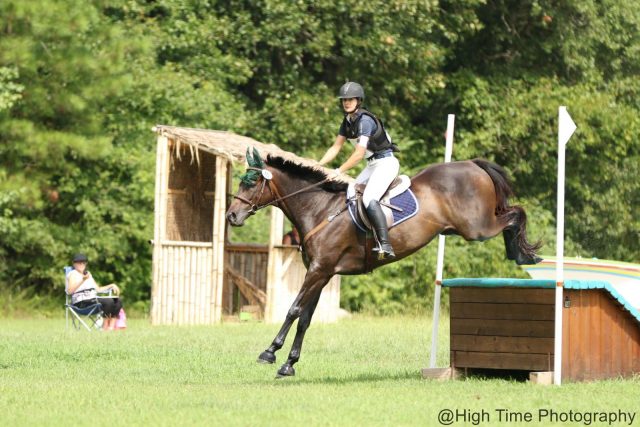 We all know that certain horses are special — they have more heart, more personality, and more goodness than the average beast. Silly Wabbitt, AKA Rocky the one-eyed wonder horse, is one such special horse.

Rocky was purchased off the track by my trainer Jammie Hand, then retrained and evented by her daughter Morgan Boyer through Intermediate. Now all grown up, Morgan partners with Jammie in the management of Blue Line Farm. I stumbled on Blue Line shortly after moving to Greensboro, NC, as a very out-of-practice adult ammy who had evented to Novice (OK, I did Novice once) as a teen, eager to get back into eventing.

Leasing turned into owning a terrific mare who carried me back to Novice, but when I wanted to try for Training she was not on board and was sold to a less demanding home. Looking for a horse to build my confidence, I asked if I might lease Rocky and our adventure began! We practiced for several months and entered my first Training event at the Fork; yes, I decided that my very first Training and our first event together should be one of the biggest Rolex prep events on the calendar — what could go wrong? 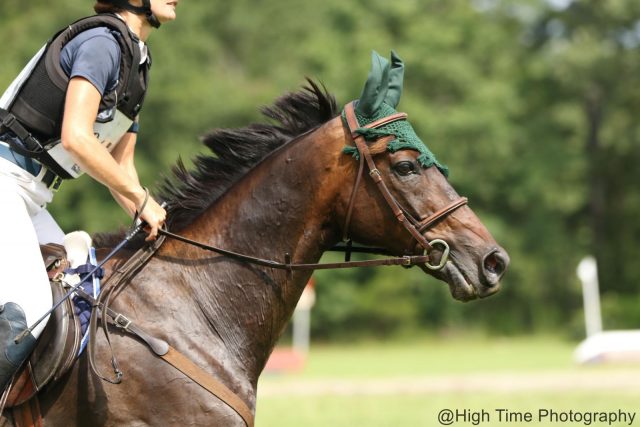 It was an eye-opener, both the scope of the show (“hey, there’s yet another of my four-star idols right over there!”) and the size of the fences! They seemed mountainous to me, and through timid riding I managed to pick up two cross-country stops with Rocky — the horse who never stops.

Still thrilled with accomplishing my goal of competing at Training, we went back to work and formed a real partnership and friendship over the next several months. The jumps seemed to shrink as Rocky gave me confidence I had never experienced before. He is a perfect cross country horse — forward but responsive, a true joy to run. I learned how to line up on the fence, put my leg on and go! Rocky taught me so much not only about cross country, but also about stadium and dressage. We competed several times over the spring and summer and steadily improved, winning the July War Horse event at the Carolina Horse Park in Southern Pines. 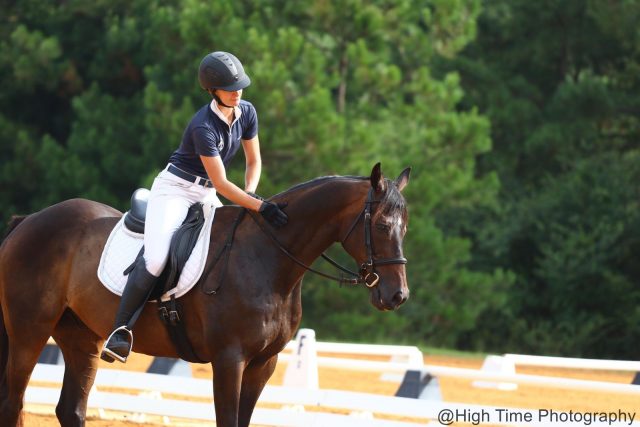 We returned to War Horse at Carolina Horse Park in September with high hopes. However, Rocky slipped getting off the trailer and got away from me, taking a very uncharacteristic solo gallop around the show stabling. When I caught him not more than a couple of minutes later there seemed to be something wrong with his left eye. The on-site vet checked him out and recommended that I get going to NC State. We drove as fast as safety and the law allowed, but when I unloaded him at NC State I could see that the eye appeared to be shrunken and full of blood. The ophthalmology team confirmed my worst fear — the eye was damaged beyond repair and needed to be removed. One tearful phone call with Jammie later, Rock was off to surgery.

Rocky came home after a few days with his left eye socket wound stapled shut. He seemed a little confused and unsteady at first, but cantered off into his pasture to see his friends as soon as he was allowed. After about a week we tried walking around the arena and the farm. Rocky spooked a couple of times, which is very unlike him, and my heart sank. We slowly got back into work as directed by our vet, and he got better every day. 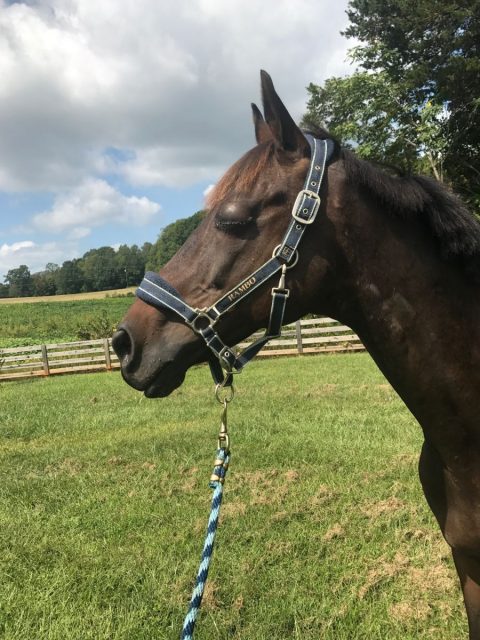 Finally the staples came out and we were ready to see if he could still jump. Morgan wanted to take the first jumps and tried a couple of cross- rails and small fences. Rocky sailed over them with his old enthusiasm and confidence. There was no doubt he knew exactly where the jump was and intended to jump it. I got on and we had our first jump school since the accident. Amazingly, he seemed just the same horse as ever. We decided to get plans back on track and entered the October War Horse in the Novice division.

The War Horse series features a schooling day the day prior to competition, and we definitely wanted to take advantage before our first show back. I took Rocky out with the rest of the Blue Line crew, planning to do the Novice fences and maybe try a couple of the easier Training obstacles. Rocky had other ideas, and quickly showed me that he could — and wanted to — jump the BIG jumps. From the saddle there was no hint that he had lost an eye — he locked on to fences, galloped, and jumped with his typical enthusiasm and joy. We bumped up to Training level for the next day and put in a solid performance (no jump penalties on cross country of course!). 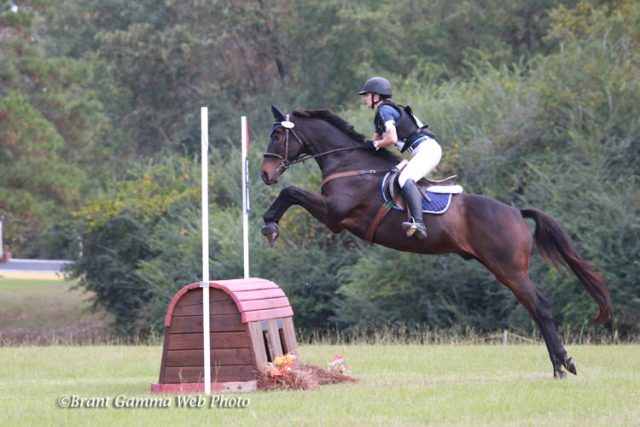 Virginia Horse Trials was next — our first recognized show since the accident. Dressage showed that we were a bit out of practice and we had a rail in stadium — but I was still thrilled with my buddy Rocky. It poured all night before cross country, and I was having serious doubts about going out on course. It was a muddy mess, but other riders were getting around without slipping so we decided to go for it. I was quite nervous heading to the start box, especially as the horse in front of us slipped and scrambled badly at fence 1. Finally, our moment arrived: Rocky sprang from the start box and galloped away, sailing over the course despite the terrible conditions. He brought me home with a clean, safe round. We finished 10th of 21, not bad for six weeks after losing an eye.

Rocky was just a wonder horse — not a one-eyed wonder horse — when we first met. He has given me confidence at Training level and showed me the true joy of running cross country. Through his accident I learned about having faith in your horse, and that I have a remarkable barn family. Jammie and Morgan have been my biggest cheerleaders, despite the fact that their best horse suffered a permanent injury while in my care. The rest of the Blue Line crew has been there to encourage us and help take care of Rocky when he was first hurt. And Rocky — he is still the same goofy, gentle, carrot-stealing cross country machine as before. He is just a little more special now. 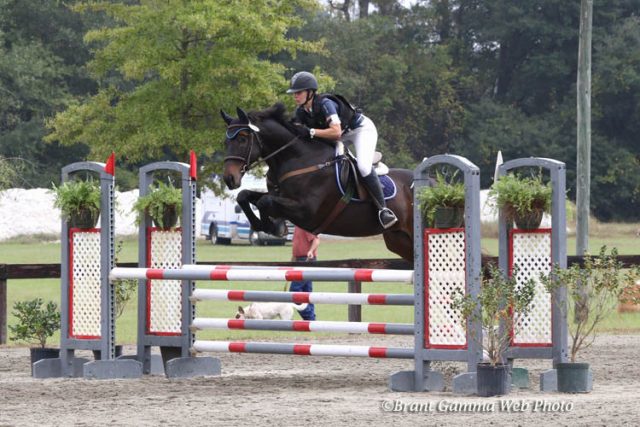