We’ve had a large number of new names appear on the Rolex entry list since yesterday’s update, with heavy hitters Buck Davidson and Phillip Dutton each entering four horses. Rolex rules dictate they can only ride three, so they’ll both have to narrow their entries by one before the first horse inspection on April 22.

Carl and Cassie Segal’s Ballynoe Castle RM, the current U.S. Highest Scoring Horse of All Time, leads Buck’s talented lineup. “Reggie” has placed in the top four at Rolex in the last two years, and now the 15-year-old Irish Sport Horse gelding returns to Kentucky to try for the win again.

Sherrie Martin’s The Apprentice, an 11-year-old Irish Sport Horse gelding, will make his CCI4* debut with Buck after a long history of top finishes at the CCI3* level. “Dirk” finished in fifth place last fall at the Dutta Corp Fair Hill International CCI3*.

Sherrie Martin and Carl Segal’s, Copper Beech will also be making his CCI4* debut as the youngest member of Buck’s team. At the ripe age of 9, “Sean” has dominated both of his CCI3* starts, winning Jersey Fresh last year and finishing second at Galway Downs.

Buck’s fourth entry is Petite Flower, a 13-year-old Thoroughbred mare owned by Caroline and Sherrie Martin. She did just the dressage at Kentucky last year, scoring 54.2 before being withdrawn prior to cross country.

Phillip’s string of four is also led by a stalwart of the sport, with Mr. Medicott slated to make his ninth CCI4* start. “Cave,” a 16-year-old Irish Sport Horse gelding owned by the Mr. Medicott Syndicate, was sitting third at Kentucky last year after cross country but was ultimately withdrawn.

It was later discovered that the horse had aggravated an old tendon injury, and after an extensive period of rehabilitation, Cave is making his return to competition this week in the CIC2* at Carolina International in preparation for Rolex.

Evie Dutton’s Mighty Nice, an 11-year-old Irish Sport Horse gelding, is also returning to competing in the CIC2* at Carolina after an injury forced his withdrawal from Burghley last fall. “Happy” placed 10th at Rolex in his four-star debut in 2012, and he also racked up another top CCI4* placing last year, finishing seventh at Luhmühlen.

Tom Tierney and Simon Roosevelt’s Fernhill Cubalawn is slated to tackle his first CCI4* with Phillip, who took over the ride on the 12-year-old Holsteiner gelding from Alex Green last summer. Though rails in show jumping kept them out of the top 10 at Blenheim CCI3* last fall, Phillip said the horse’s fitness has come a long way since, and “Cuba” is up the challenge in Kentucky.

Tim Bourke is the first Irish entry with his own Luckaun Quality, a 10-year-old Irish Sport Horse gelding that fell just a few fences from home at Rolex last year. The horse has since had tie-back surgery and recovered well, finishing 15th at Fair Hill CCI3* with a clear cross country and just a handful of time penalties last fall.

Everyone’s favorite vet Kevin Keane will return to Rolex for a second time with his own Fernhill Flutter, a 13-year-old Irish Sport Horse gelding. Kevin and “Butterfly” finished 28th last year after crossing their tracks on cross country added 20 penalties to the score card. You won’t hear a louder cheering section all weekend!

OTTB fans will be excited to see Rolex rookies Leah Lang-Gluscic and AP Prime officially on the entry list for their CCI4* debut. Adopted from CANTER Illinois for $750, “AP” serves as a wonderful example of how perfectly suited off-track Thoroughbreds are for eventing. Leah and AP finished 26th in a competitive field at Fair Hill CCI3* last fall.

Rachel McDonough and Irish Rhythm are the second pair entered for Canada, returning to Rolex for a second year in a row after making their first appearance last year. “Oliver,” a 15-year-old OTTB gelding, stormed around cross country last year for a double clear trip to ultimately finish 25th.

Colleen Rutledge’s cheering section will likely rival Kevin Keane’s on cross country day when fan favorite Shiraz returns to his stomping grounds. “Luke,” a 17-year-old OTTB gelding, will make his seventh start at a CCI4* and first FEI appearance since Kentucky last year, when he strained a shoulder on cross country after going double clear and had to be withdrawn.

These new additions to the Rolex entry list bring us up to 45 horses and riders entered so far, with many more still to come. Stay tuned! 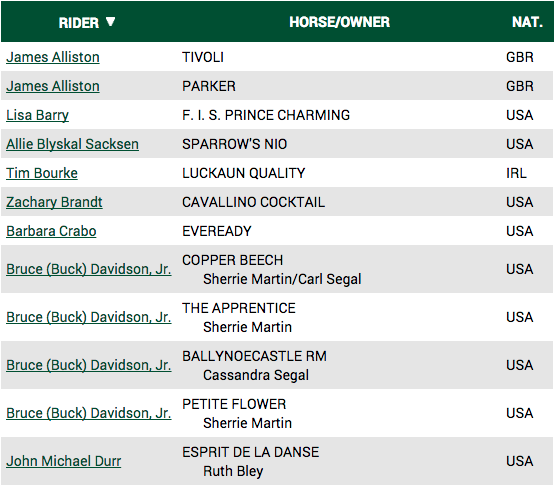 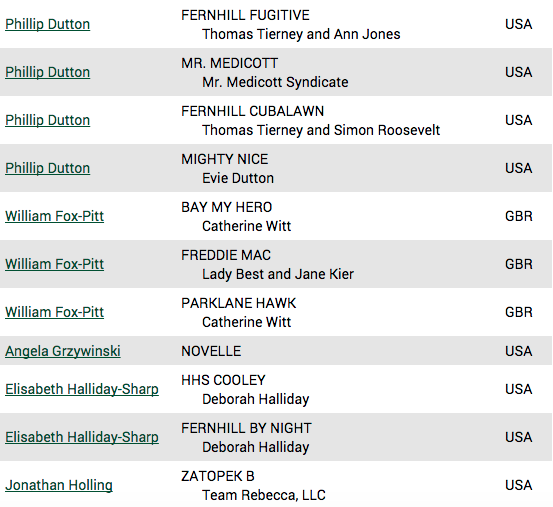 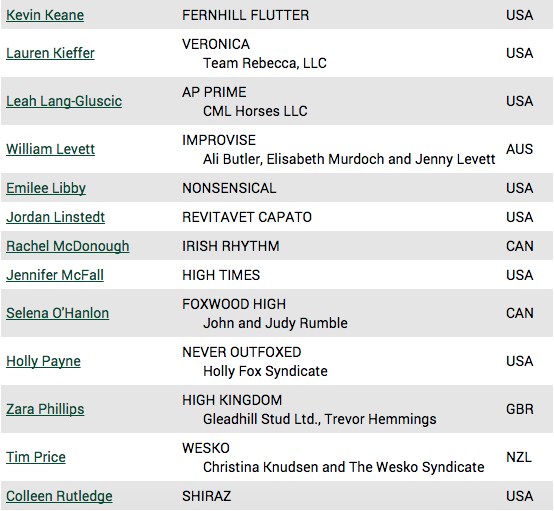 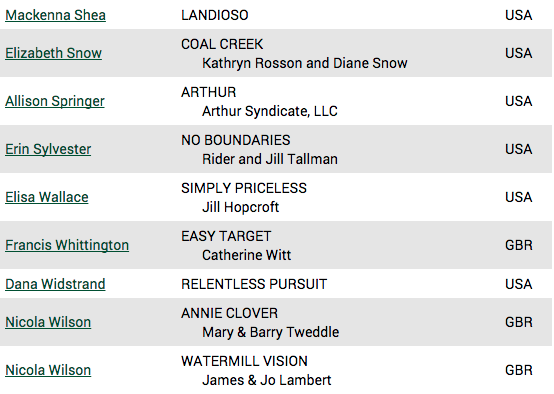