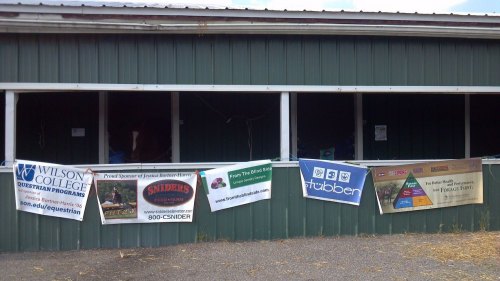 We've arrived at the RRTP! The Rocky Start Stables stall area at Pimlico.

This morning, I set off from NC with Bug and Hotty on a trip to Baltimore, MD.  Our destination, the Retired Racehorse Training Project Makeover and Symposium.  Hotty is my makeover horse and will be showing off on Saturday, and Bug is participating in the USEA Cross Country Demo on Sunday.  Even though I grew up in York, PA (which is less than an hour from Baltimore), I never had the chance to go to Pimlico to watch the races. 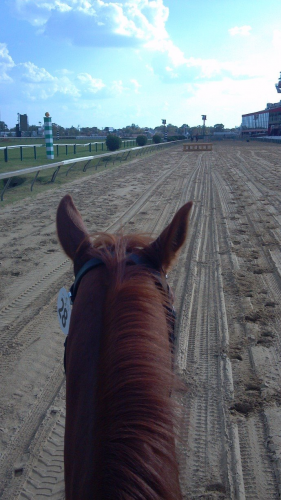 Bug ears on the track at Pimlico. What a cool feeling to be riding on this track.

After getting everything unpacked, I took each of the horses out on the track to see the place.   I took Bug out first, and I was very interested to see how he would behave.  Of course, as all things are with Bug, he took it all in stride.  He knew he was at the track, but he was not worried about it.  He was actually pretty sure that he was there to show off.  He trotted all of the way around the track like a champ.  Because we’re two weeks out from Fair Hill, he’s actually due to have a gallop while he’s here.  I’m really excited that I’ve been given permission to take him out on the track tomorrow morning to have his gallop!  Many amazing horses have run on that track, and now Bug will be another one. 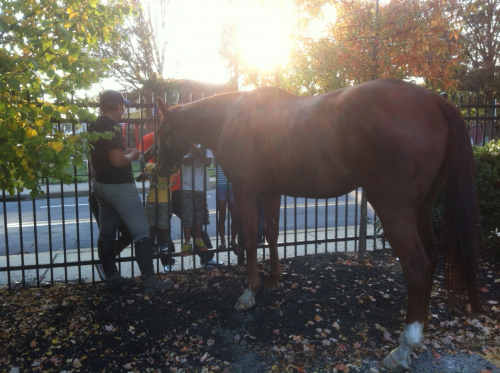 The kids in the park next to the stabling area wanted to pet a horse. Bug was more than happy to oblige his fans.

Most of the other Makeover horses were pretty riled up about being back on the track, so I was pretty interested to see how my Hotty girl would handle things.  She went out there like a champ and was very well behaved.  The “arena” part of the track is small and everyone wanted to get their chance in it, so it was pretty crowded.  She looked around a bit, but he settled right in and was quite good.  I even jumped a few jumps to make sure her mind was focused.  I am so proud of how well she handled it, and I’m excited for tomorrow. 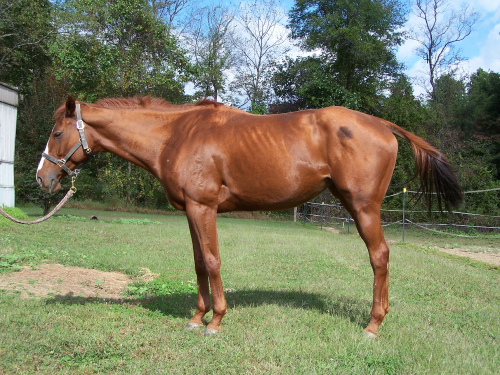 Hotty's last confo shot before leaving for RRTP. She's changed so much!

Thus far, it has been really cool to see all of the different trainers from different disciplines and their horses.  Everything gets under way tomorrow, and I will try to get as many pictures as I can!  For those of you who didn’t get to buy tickets, it will be streaming live on HRTV.com!