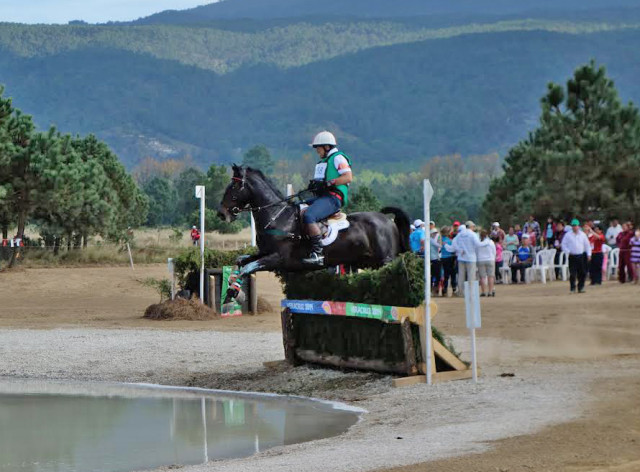 A rule under the Pan American Games charter forced Sarka Kolackova of Guatemala to forfeit her individual bronze medal in eventing at the Central American and Caribbean Games held last month in Veracruz, Mexico.

Though Sarka finished on a score of 52.6 with Sir Royal, .6 penalty points ahead of Mexico’s Guillermo de Campo and Quelite, the rule does not allow more than two individual medals to be awarded to athletes from the same nation.

Because Sarka’s Guatemalan teammates Stefanie Brand and Carlos Sueiras won the individual gold and silver medals, the rule required the bronze medal to be awarded to Guillermo, the next rider in the standings hailing from a different country.

Gretchen Butts, a member of the ground jury at the Games, said the officials thoroughly searched the Central American and Caribbean Games’ Technical Manual for Equestrian and eventually determined the rule had to be enforced.

“This was explained to the teams, coaches and chef d’équipes, who all accepted the ruling, although I am not sure there was truly any option. … We all were very disappointed for (Sarka’s) ‘loss,’ if you will,” Gretchen said.

The rule, which can be viewed on page 44 of the Central American and Caribbean Games’ Technical Manual for Equestrian on the FEI website, states: “For individual placements, nations are not allowed to be granted all 3 medals. In case a single nations [sic] places first, second and third, the bronze medal will be awarded to the next best placed athlete of a different nation.”

“The Pan American Games charter does not allow for more than two individual medals to be awarded to the same nation, and this rule applies to all sports, including equestrian, in these Games,” Catrin said.

Though the rule still impacts the Central American & Caribbean Games, it was abolished for the Pan American Games prior to the 2003 Games in San Domingo, TORONTO 2015, the organizing committee for next year’s Games confirmed.

But it did impact medals in equestrian at past Pan American Games, a scenario Peter Gray, who coached the Guatemalan team at this year’s Central American and Caribbean Games, knows all too well.

At the 1987 Pan American Games in Indianapolis, U.S. riders took the top three individual slots in eventing: Mike Huber in first, Emily McGowan in second and Packy McGaughan in third.

But because all the riders were from the same country, Packy had to hand his medal over to the next rider from a different country, which happened to be Peter representing Bermuda.

“Back then I was happy about the rule,” Peter said, as it meant he won the bronze medal even though he actually finished fourth on the scoreboard. But does he agree the rule should still be applied now to competitions like the Central American & Caribbean Games?

“The bronze medal should go to the third best person,” Peter said. “I don’t know why the Pan Ams should have a different rule than, say, the Olympics. You can’t take someone’s score away; it honestly doesn’t make sense to me. If the top three are all from the same country, then that’s still your top three.”

Peter had forgotten about the rule when it came time for show jumping at this year’s Central American and Caribbean Games — until officials informed him that Sarka could not receive her bronze medal.

“She was so disappointed,” Peter said. “Riders work so hard to get that result, and then to have it swept away from them — it seems so unfair. No one ever remembers who finished fourth.”

Sarka did not wish to comment for this story. Officials from the Central American & Caribbean Games and the Pan American Sports Organization could not be reached for comment.

What do you think, EN? Should this rule be abolished immediately? Is there any reason why all three medals should not be awarded to athletes from the same country?

This story has been updated with new information from TORONTO 2015, the organizing committee for the 2015 Pan American Games.