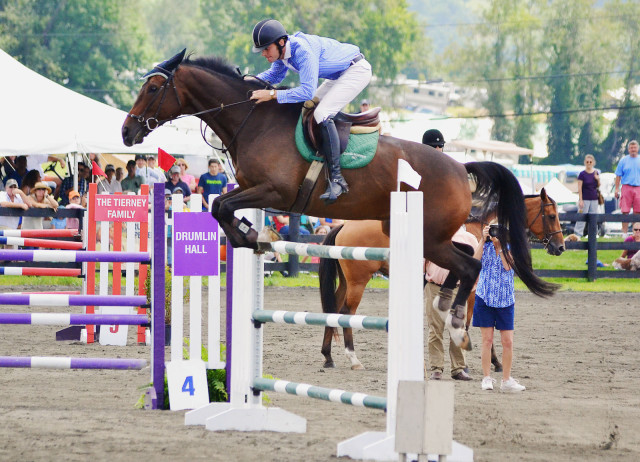 Ryan Wood and Storm Warning over 4'10". Photo by Jenni Autry.

The $1,000 PRO 4-Bar Show Jumping Challenge served as a highlight of yesterday’s show jumping finale at Millbrook, with Ryan Wood and Storm Warning ultimately clearing 4’10” to win. Ryan had to best Doug Payne; who has been successfully campaigning quite a bit in pure show jumping lately; local rider and Advanced competitor Booli Selmayr; and Millbrook Hunt first whipper-in Richard Daley.

The fences started at 3’6″, with all the riders going through clear but Richard, who was unfortunately eliminated right off the bat with Clermont. The rails then went up to 3’9″, with Ryan, Doug and Booli all clearing that height. Boyd Martin provided colorful commentary in the patron’s tent, which you can hear a bit of in the video below courtesy of PRO. 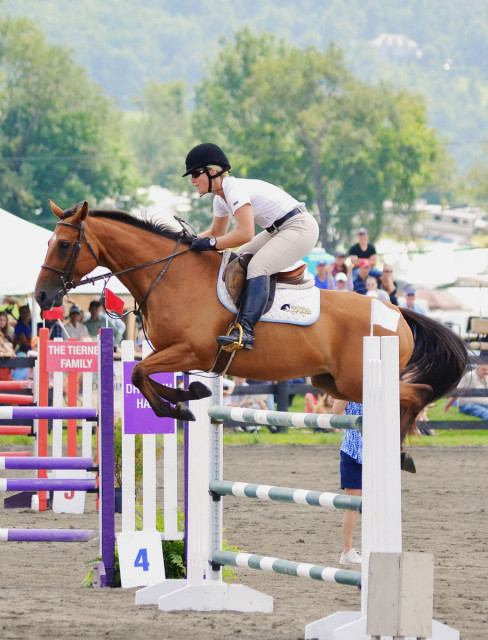 All three again cleared 3’11”, so the poles were cranked up to 4’6″, with Doug and Amadeus the first to go through at the new height. Unfortunately, Doug and Amadeus pulled a rail at the third fence, leaving Ryan and Booli to duke it out for the win. Both Ryan and Storm Warning and Booli and Amber Sky made it through — with much clucking and encouragement from Boyd and the crowd.

The rails then went up again to 4’10”, with Ryan and Storm Warning sailing through, leaving underdogs Booli and little Amber Sky to answer back. Though they cleared the fourth and highest fence, Booli and Amber Sky knocked the third rail, leaving Ryan and Storming Warning as the victors. Congrats to Ryan, and thank you to Samantha Lendl and PRO for organizing such a fun demonstration. 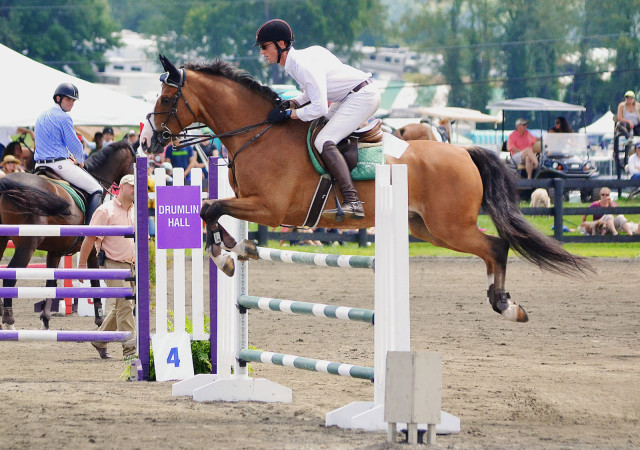 All the riders tackled the 4-bar with horses for sale via David Hopper and Tatra Farm, so the show jumping challenge provided a unique opportunity for spectators to see the sales horses in action. You can watch them all in the video below courtesy of PRO; here’s a little more information on each of the horses:

Ryan’s mount Storm Warning, an 8-year old 17.h, Selle Francais by Coconut Grove, was started at the Winter Equestrian Festival in 2014, competing at 1.20 meter and finishing successfully at 1.30 meter. The gelding won the Hudson Valley Indoor Mini Prix in April and the Hudson Valley Outdoor Mini Prix in June. He also placed successfully in the 7- and 8-year-old division at Hits I and Hits II. 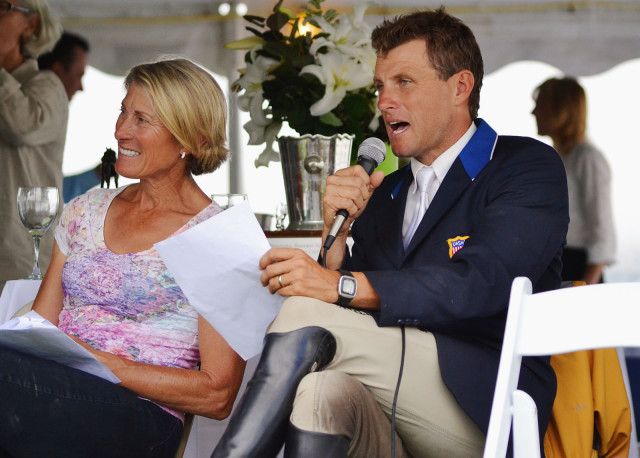 Boyd Martin heckles the competitors while Marcia Kulak waits to take over the mic for Advanced show jumping. Photo by Jenni Autry.

Doug rode Amadeus, an 8 year-old, 16.2-hand Dutch Warmblood by Timeless. The gelding has competed successfully in Europe up to 1.45 meter and was imported at the end of February this year. He placed in eight out of 10 classes from 1.30 meters to 1.45 meters at the Winter Equestrian Festival, Hits II, and Saratoga, where he also placed in the $25,000 Grand Prix.

Booli rode Amber Sky, a 9 year-old,15.2-hand Holsteiner/Thoroughbred cross. Owned, bred and trained at Tatra Farm in Clinton Corners, N.Y, her sire is Magnum, who has been ranked in the past as one of the U.S. No. 1 stallions for producing young jumpers and Grand Prix horses. She has won several Classics in the Hudson Valley area, and she is also a two-time winner of the Holiday High Jump at Tatra Farm jumping 5’4”.

Richard Daley rode Clermont, a 6 year-old, 16.1-hand OTTB gelding. He was in training briefly as a 2 year old and never raced. He was then acquired by Tatra farm and retrained as a show jumper and event horse. He has been showing in the amateur divisions at the “A” shows.