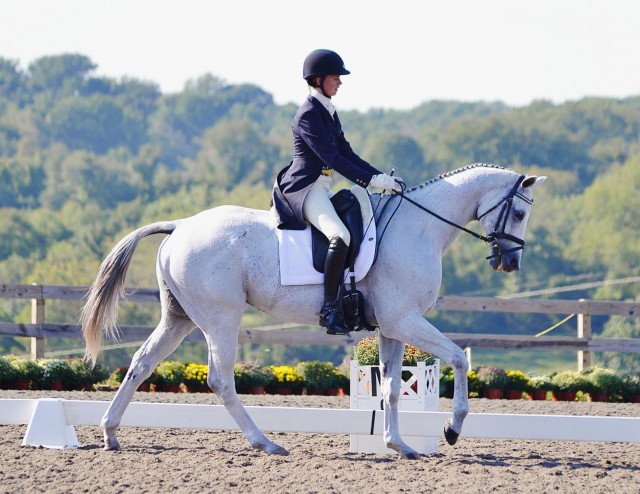 It’s with a very heavy heart that we’ve learned that Titanium, a 14-year-old Thoroughbred gelding owned by Caroline and Sherrie Martin, Sergio Rios and Bruce Davidson, collapsed and died at home yesterday in Ocala, Buck Davidson told us today. While the cause of death is not yet known, Buck believes the horse likely suffered an aneurysm.

“I was so lucky to have such an amazing horse that taught me so much and gave me his whole heart. I will never ever forget him and everything that he gave me,” Caroline said.

Titanium (Shuailaan x Lost Silver, Lost Code) was bred by Sandra and Hargus Sexton in Kentucky. He raced 14 times, earning $11,673 before finding his niche in eventing. As the story goes, Joanie Morris found Titanium at the Camden, South Carolina, steeplechase races. She called Buck with the recommendation and he bought him sight unseen.

Buck took Titanium to his first Novice horse trials in January 2007, and by the end of the year he had completed his first one-star. He went on to a successful three-star career, finishing 7th at the 2009 Jersey Fresh CCI3* and 11th at the 2011 Galway Downs CCI3*. They made two appearances at Rolex and were short-listed for the 2010 World Equestrian Games.

In 2012, Caroline took the reins and together she and Titanium completed seven Advanced and three-star competitions with no cross-country penalties, including a fourth place finish at Bromont in 2013. They had begun their 2015 season in Ocala, where they finished 14th in a Preliminary division.

“He loved his job so much. I have never ridden or seen a more genuine horse,” said Caroline. “He took such good care of me.”

Please join us in extending our sincerest condolences to all those who new and loved Titanium.