We are delighted to host Sally Cousins as our guest blogger, as she shares her wealth of knowledge with us in the form of weekly training tips. We hope these nuggets of information can be integrated directly into your program at home and can influence the way you ride and train your horses. Be sure to check out both the Sally Cousins Eventing website and keep up with her on Facebook. 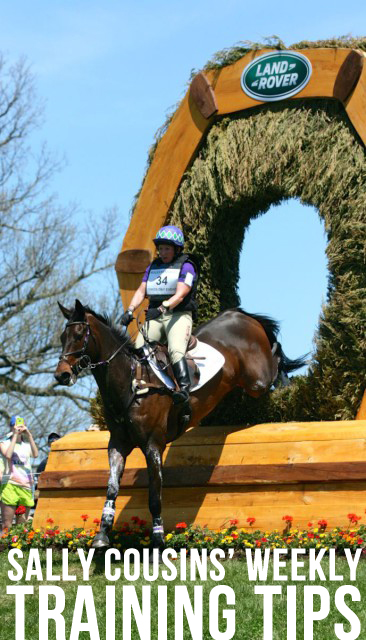 Two years ago I bought a very fancy 4-year-old. He was an amazing mover but did not yet know how to jump under saddle. I did not ride him before I bought him, but he had been broken by a very good horseman who had put 30 days into him. When I started riding him, he was perfect, quiet, willing and independent. We then made our usual trip south for the winter and he continued, for about two weeks, this perfect behavior.

He then spent the next year running sideways back to the barn, in some form or another. In that time I taught him to jump, and he was powerful and brave. The winter of his 5-year-old year was not much better, but I did enter him in a Beginner Novice level event at a very friendly venue. I missed the closing date to scratch and get my money back, so I decided to take him to do just the dressage and hoped that if he was naughty he would not disrupt anyone else’s test.
But even the week before the event I did not think I could get it done. To my surprise, he was pretty good in the dressage. Feeling very brave, I decided to do the show jumping and again it was easy. I hadn’t even walked the cross country, it never occurred to me I would get that far. Someone had to run and find a map. He marched right around the course. He has not put a foot wrong since and confidently went from that event to Training level in six months. This is the fancy youngster I bought 18 months earlier.
However, this rate of progress is not sustainable. At that event, I had a breakthrough. A breakthrough should not be taken as a rate of progress that can be continued. I have given him no reason to start that bad behavior again, and I have been careful not to over face him or force him to do something he doesn’t understand. I would expect to spend much of this year at Training level to make sure he stays on my side. Slow, methodical training is what makes progress sustainable. Sometimes, though, it can feel like the improvements are taking forever.
With my horses, I let them tell me when they are ready to do more since all horses progress at different rates. In my experience, making set plans with horses rarely works out on schedule.
More Insanity on Horse Nation >>