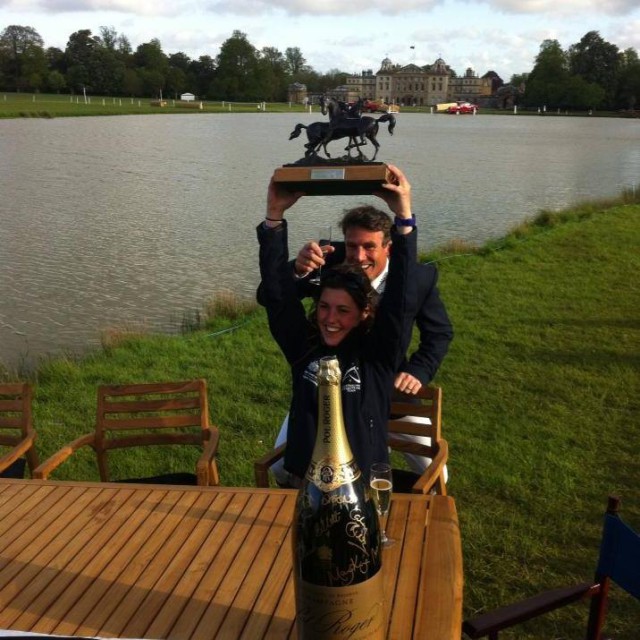 There was much to celebrate at Team Griffiths’ UK-based yard after Chris Burton won the Land Rover Burghley Horse Trials, as Australian team-mates Sam Griffiths and Chris Burton are great friends; as are the riders’ grooms, Imogen and Jade. “We are all so thrilled,” Imogen Mercer told EN. “Chris’ was an amazing performance — really stunning and we are all very pleased for the Australian team.”

It has certainly been a thrilling weekend for all of the riders’ connections and fans. We all know how excruciatingly nail biting it is watching cross country from the comfort of our own armchairs — but imagine if you are the groom of an elite rider, seeing glimpses on a big screen or catching the commentator’s words as you race to the finish line, bucket in hand.

It was a day of mixed emotions for the Australian riders at Burghley Horse Trials. Victor Chris Burton has undoubtedly been celebrating after a nail biting show jumping round, however some of his compatriots had worse luck. Shane Rose had issues aboard Shanghai Joe at the Road to Rio double and Cross Rails, while Sonja Johnson and Paul Tapner, riding Parkiarrup Illicit Liaison and Up In The Air respectively, had falls.

But as Imogen Mercer explains, fellow Aussie Sam Griffiths had one of the unluckiest occurrences ahead of the fourth fence, when his stirrup iron broke aboard Happy Times. “The whole foot-bar sheared off,” recalls Imogen, who is Sam’s head girl. “They are aluminium stirrups, and it snapped off on the turn to the Lion Bridge.”

Sam casually continued, successfully tackling a further ‘five or six fences,’ including two water jumps, as he adjusted his leathers down with one hand, so he could put his foot in the leather loop.

“This was working, but the iron was hitting Happy on the shoulder excessively, so Sam pulled up,” Imogen ruefully explains. “You can’t explain it, and you can’t blame anyone — it is just bad luck. The same happened to Dan Jocelyn in the warm up, with a completely different brand of stirrup.”

Burghley is renowned as being a challenging cross country course, and 2016 was certainly no exception, reportedly the hardest in over a decade. “Sam agreed that it was tough, and a touch harder than in previous years,” Imogen tells us. “It is due to the venue’s undulations and hills, which really take it out of the horses.”

Burghley comes just a short time after the Rio Olympics, Imogen’s first Games. So how did she find the event?

“I can’t speak highly enough of the organisation at Rio. It was so well organised and the facilities were amazing,” she continues. “The horses needed for nothing, there were beautiful stables and everything was second to none. The air transport was also great, and the horses all travelled so well. I had been to WEG, but this was my first Games, and it was a wonderful experience — especially as Sam achieved a team bronze medal and an individual fourth placing!” 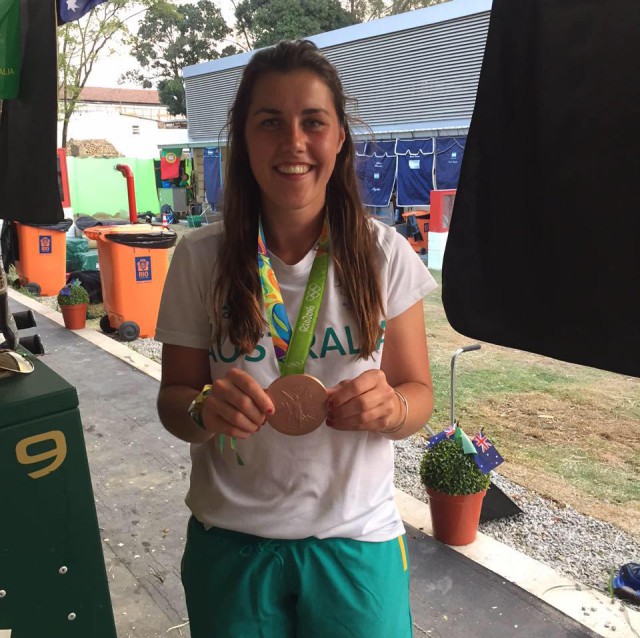 Imogen had extensive hands-on experience when she took the job with Sam six seasons ago having finished her A-levels, close to the city of Bath, in the UK.

“I hadn’t gone to university or college to study, but nowadays there are so many equestrian courses available that don’t necessarily lead you into a job,” she tells EN. “I had worked at yards and had proper experience of yard work ahead of Sam’s, and I started off there as a working pupil — with a huge amount of support from Sam and his wife Lucy, I progressed to head girl. I actually initially came with my own horse to event and compete that had taken me up to Intermediate level; however, at around the time I moved to Sam’s, I got a new horse.”

Sam now events the horse in question, Imogen’s 11-year-old mare Gurtera Cher, contesting events including Barbury and Bicton Arena International Horse Trials this year at two star level, with 10th at Rockingham International a personal best for the pair. With another two star planned for the end of the season, Imogen is looking forward to the combination doing well.

The Griffiths Eventing Team has 20 horses at its UK base in Dorset — around 15 are campaigned and competed, with the rest making up the staff’s horses and some schoolmasters for Sam’s coaching clients.

Imogen says her second in command, groom Line Andressen, is a godsend. “I couldn’t be without her,” Imogen tells us.

As the travelling groom, Imogen is away at national shows every weekend in the season, and at key international events in May and June and Sept and October. “Sam’s wife Lucy, who evented at three star level herself, rides too and helps with the business, which includes coaching and some producing, and we have three other grooms based at the yard,” Imogen says.

When travelling, Imogen sleeps in the lorry, pictured below, in a ‘cubby hole,’ which is a comfortable pod above the washroom that’s accessible from the horses’ area as well as the living. She was fortunate enough to take her HGV test for the lorry as part of the UK’s WTTL transport training and driver development scheme.

“I trained over 10 months to achieve my Driver CPC and HGV,” she tells us. Imogen is also a member of the British Grooms Association, which offers support and promotes professionalism and horsemanship across the industry, welcoming all UK-based grooms to its membership, as well as British grooms who work abroad.

When asked what are her ‘couldn’t live without’ items, Imogen says her favourite quarter marker brush and black grooming trolley box are strictly off limits to anyone else. “They all know not to go in there,” she says, poker faced.

Imogen sounds super efficient; however, she cites the facilities and lorry as being key to her organisation. “We are lucky with our lorry, built by Empire Coach Builders, as there is a place for everything — the kit stays there all of the time, apart from a few smart rugs for the big shows — it’s pretty much always packed,” she says. 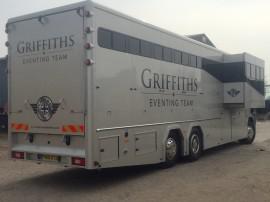 Sam’s lorry has a place for everything. Photo via Empire Coach Builders.

With Blenheim, Gatcombe and Osberton horse trials around the corner, as well as Boekelo in the Netherlands, this is Team Griffiths’ home stretch ahead of Christmas.

“The horses go out in October, and some go back to their owners for a holiday, leaving just four or five in work,” Imogen tells us. “I am so lucky, as this allows me to have time off in November and December. I come back just after Christmas, and Lucy and Sam make sure the staff get good time off at Christmas too. It allows the Griffiths to have some family time together, and Lucy’s parents are planning to join them for a family Christmas, which will be lovely for them.”

With that, Imogen heads back to the yard for a post-Burghley rest, ahead of Blenheim, where Sam is campaigning On The Brash — and here’s hoping that Sam has much better luck in the stirrup department for the rest of the season!