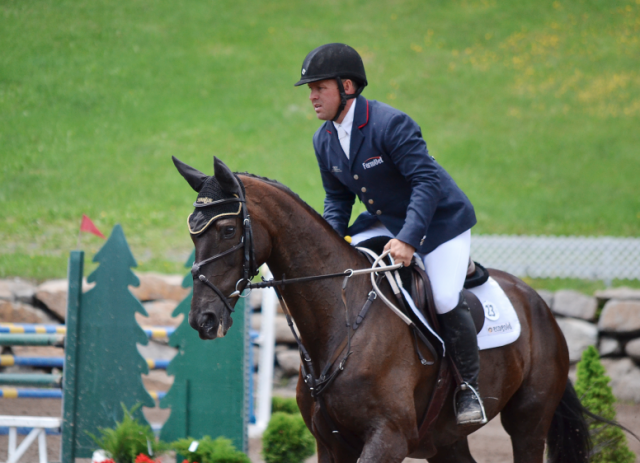 Buck Davidson just informed us that Santa’s Keeper has been euthanized following heroic efforts to save him after he sustained a leg injury at the Ocala Horse Properties January Horse Trials Saturday. Dr. Nathan Mitts, who has been treating Simon, issued the following statement: “We regret to inform that Santa’s Keeper was euthanized today as his condition deteriorated. An exam is ongoing, and we hope that the findings will advance our early recognition and care in the future. Simon was brave and stoic to the end, and he will be missed.”

As we reported yesterday, Simon show jumped well Saturday in the Open Intermediate division at Ocala, but looked stiff in his right hind back at the trailer. The leg then swelled badly, so much so that Buck had to postpone teaching lessons at his farm in order to keep the barn as quiet as possible to encourage Simon to lay down and rest the leg. Buck and his veterinary team did everything they could to save the horse.

All horses are special, but Simon was particularly special to Buck. A Thoroughbred gelding purchased off the Keeneland racetrack as a 3-year-old, Buck brought Simon all the way through the levels, with a second-place finish in the Bromont CCI2* last year standing out as a bright spot in their partnership together. Buck owned Simon with his longtime supporters Carl and Cassie Segal; he gave them a partnership in the horse as a Christmas present three years ago. Simon was a favorite in the barn, “a horse we all loved,”  Buck told me today. “He was the kindest horse in the world.”

Update 6:30 p.m. EST: Dr. Nathan Mitts has released the following statement on his findings during the postmortem exam:

“Santa’s Keeper sustained a rupture of his right quadriceps muscle and right transverse abdominal muscle, presumably during his round of show jumping on Saturday, January 11. The severity of these muscle injuries, the corresponding internal hemorrhage, and the onset of support limb laminitis proved too much for us to overcome.”