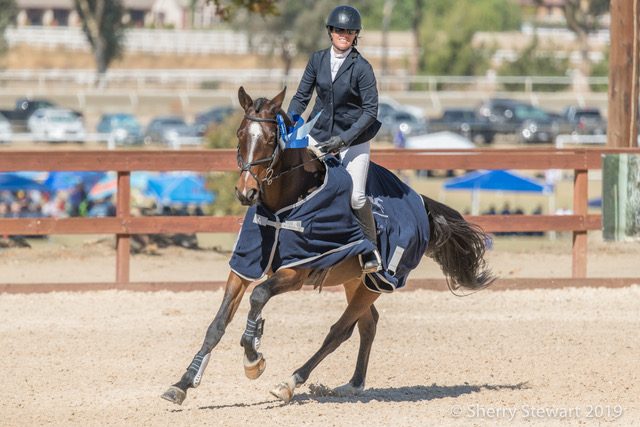 Tamie Smith put the United States Equestrian Team pinque coat on in hopes of scoring a third Galway Downs International victory, this one in the CCI4*-L. But after two rails with owner Ruth Bley’s fast-rising star, En Vogue, it was Sara Mittleider’s turn to take the top spot thanks to a double clear with La Paz over Marc Donovan’s show jumping track. It’s the rider’s first major international victory and the Hungarian Sport Horse’s first long format.

“I’ve been doing this since I was 15, and I’ve been second a lot!” said a very happy Mettleider. They were fault free all week to win on their 33.30

The rigors of the format seemed to take little toll on 9-year-old horse. “He felt really good in his body, he warmed up really rideable and he jumped incredible. I’m thrilled with him,” said Mittleider. Since getting him in Hungary as a 4-year-old, La Paz has been a bit tricky until just recently. “He’s a funny horse and has been very difficult, but moving up to this level, now that things are starting to match his scope, he’s been a lot more consistent than even I was expecting.” A move up to the 5* level may be in the cards next year. 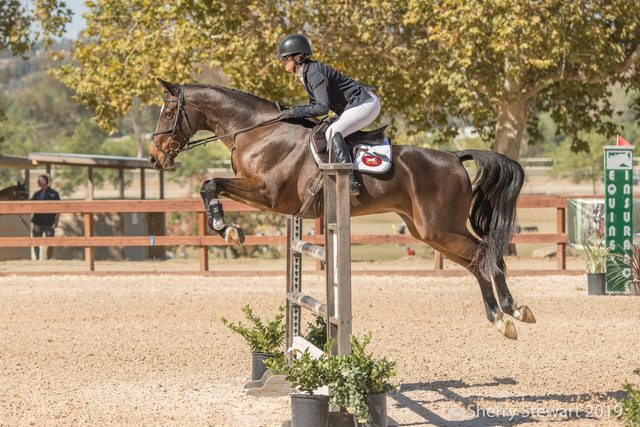 Mettleider made the trip from her professional base in Kuna, Idaho, all the more worthwhile by also winning the Open Preliminary division on RHF Peterzano.

En Vogue’s two rails didn’t diminish Smith being “super proud” of the 14-year-old Hanoverian mare, who she’s only been riding since March and is new to this level. “She tried her guts out,” Smith said. Both were back rails, not front rails more typical for the mare, and one was such a “barely touched it” that Smith had to look back to confirm it had hit the dirt and lost the win. “We have a few more ‘parts’ to tick off, but she just keeps getting better and better.” 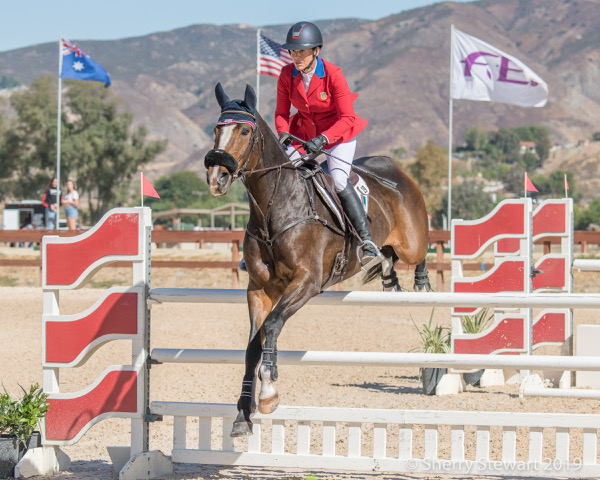 Although she had horses in three divisions today, Smith only donned her pinque coat for the CCI4*. “There are no real rules for when you can wear it,” said the 2019 Pan Am Games team gold medalist. “But my personal rule is only wear it in the 4*. It’s such an honor and something that I worked my whole life for.”

“Oh my god, he’s amazing,” were Gina Economou’s first words when crossing the timers after a double clear on show jumping to finish third on the 10-year-old Dutch Warmblood Exclusive. She imported him as a 6-year-old, but it’s been a rocky four years getting him to this level. Having some faith in him has been key to “a season of real maturity for both of us,” Economou explained. He has a wicked spook and spin in him, but also ample heart and carefulness. “In the past, when I’ve seen a big distance, I’d panic. Because I didn’t trust that I could allow him to be bold. But he’s earned that trust.” 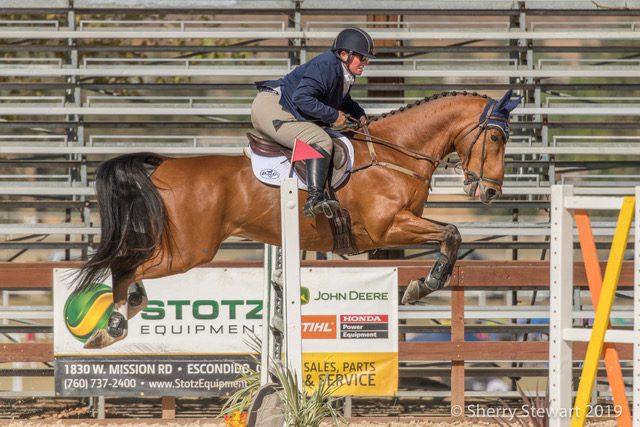 Remembering an early stretch when “I fell off of him five times in 10 days – at the walk,” Economou was thrilled to complete with only 1.2 stadium time faults to finish third on a 41.60.

Galway Downs organizer Robert Kellerhouse was the next recipient of Economou’s profuse praise. “It’s huge to run this level for this few,” she noted of the six-pair starting roster. “He didn’t have to do it, and if he hadn’t, we wouldn’t have had the qualifiers, we wouldn’t have had this experience. The venue has changed so much, all for the better, and it’s great we have a place to compete with lots of excitement and electricity going on. Robert loves this sport as much as we do.”

Leah Breakey and Master Class were fourth in the division on a 43.40. Two other starters, Marissa Nielsen and Vinetta M and Marc Grandia and Campari FFF, had tough cross-country days and did not advance to show jumping.

On another of Ruth Bley’s young super stars, Smith stayed atop this field with Danito, even with one rail. Smith attributed it to a bit of bad luck and to also not having a sense how the 10-year-old Hanoverian’s first long format would affect him for the final phase. “You have to know when to soften or keep an extra feel,” Smith noted. The horse is so talented, Smith suspects some of that rail related to his being unimpressed with the size of the jumps. “When he gets too comfortable, he gets a little bored.” It was actually the first rail she’s had with him in the 18 months they’ve been together. “It just happens,” she concluded. 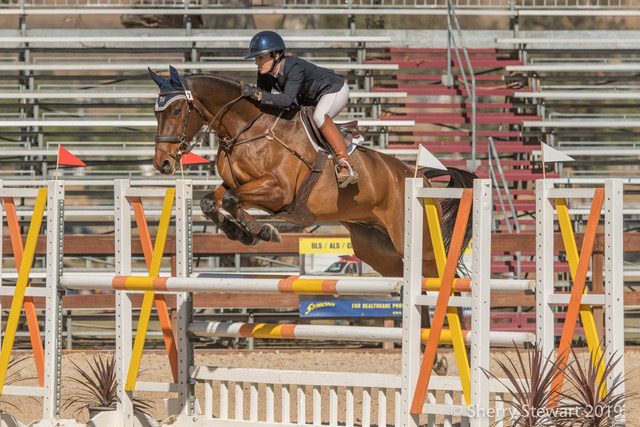 Erin Kellerhouse and her own Woodford Reserve moved from third to second with a double clear jumping finish, adding just .4 penalty in cross-country time to finish on a 32.90. Although he’s only 8, “people have often asked me why we haven’t moved up already,” says Kellerhouse of the Irish Sporthorse she imported at 4. Uphill conformation makes him a natural star in the dressage court, and he’s bold and scopey on cross-country. After a winter break, Kellerhouse plans to catch up to everybody’s expectations for Woody and move him up to Advanced.

Smith picked up this division’s third place, too, on her own OTTB No App For That, who finished on his dressage score of 36.20. Of all the week’s victories, Smith may have been most elated about those of her daughter, young professional Kaylawna Smith-Cook. Riding her own Passepartout in the 3*, she had the same score, 36.20, as the elder Smith. Mom’s cross-country time was closer to the optimum, earning her the higher placing.

Winner Danito earned the division’s Yogi Cup, and No App For That received the Livingstone Award for the highest placed OTTB.

Stunner Stays Ahead in Two-Star 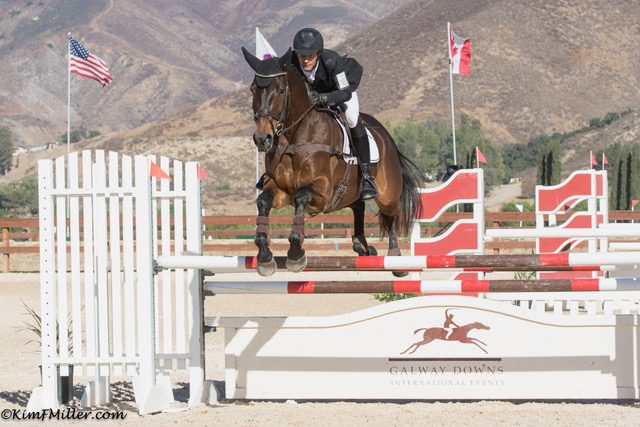 Just as the announcer relayed that David Koss and Stunner had a rail in hand, the pair riding last in the 46-horse field lost that rail at the very first fence. There were clear from then on to keep the win with a 30.20 score. Koss felt the 6-year-old Hanoverian homebred was a bit tired and said they have show jumping work ahead over the winter. Nicknamed “Banger” for his playful barn antics, the youngster has always lived up to his name in dressage and Kos looks forward to mental and physical maturation helping to fulfil his early promise.

Professional Olivia Loiacono-Putrino finished second in this division aboard Under The Spotlight, but she refused to take credit for the 8-year-old’s accomplishments. The mare is owned by her longtime student, 16-year-old Lauren Gillis, “who has produced her all up to this point.” Gillis has competed Under The Spotlight in Preliminary and had planned to ride her at Galway, but later decided to take a bit more time for that step. 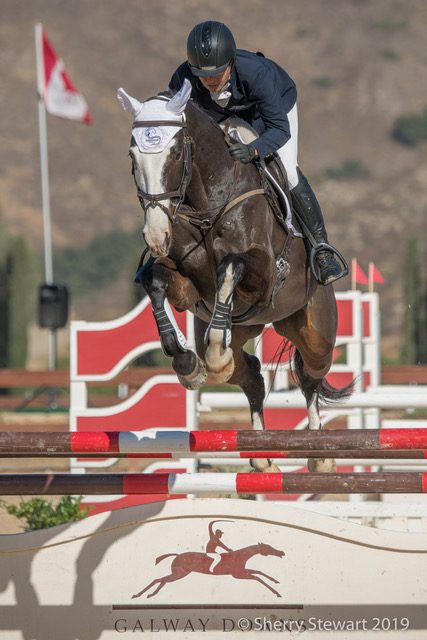 Olivia Loiacono-Putrino and Under the Spotlight. Photo by Sherry Stewart.

Loiacono-Putrino was disappointed to have a rail that kept them from overtaking the top spot, but praised Marc Donovan’s instructive course design. “He likes doing related lines, so the game is all about timing and reaction. You can’t be late, which is one of the biggest skills we need in all three phases. I love his courses, but they’re hard.”

Meg Pellegrini finished third on Ganymede, her most familiar of the three mounts she competed this weekend. She and the 16-year-old Connemara powerhouse‘s 32.10 stood them eighth after dressage, and clean cross-country moved them up to fifth before stadium. Pellegrini was sixth in this division on RF Eloquence, making her the 2*’s highest placing young rider. 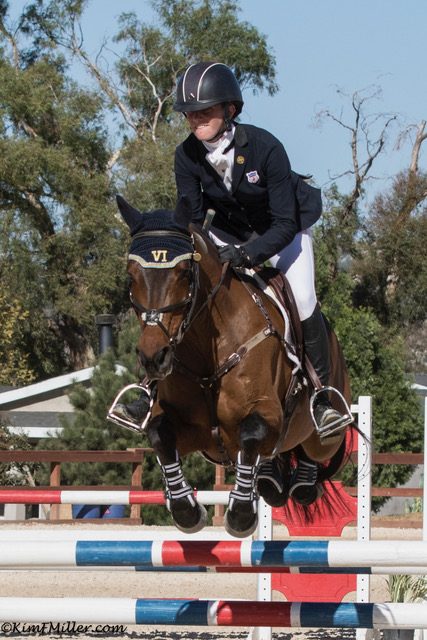 The winners in all international divisions received $1,000 and a $500 gift certificate from Voltaire. The balance of prize cash was divvied up as $750, $600, $450 and $200, for 2nd through 5th, and $100 for 6th through 8th. All top placers received generous prizes and gift certificates from sponsors: Ride On Video, Voltaire, Devoucoux, Professionals Choice and SmartPak.

A celebratory mood and good weather graced this season-ending Galway Downs International Horse Trials. The weekend started early with Thursday’s Halloween night costume party and ended on Sunday afternoon with veteran competitors James Alliston and Helen Bouscaren getting married out on the cross-country course with a custom-ordered sunset. In between, local musicians, local craft beers and Galway Spirits beverages enhanced the sporting experience at various spots around the beautiful 240-acre facility in the heart of Southern California wine country.

Jennifer Miller, the reserve champion in the Hylofit USEA Classic Series Training Three Day, summed it up nicely: “The organizer Robert Kellerhouse has done an amazing job. The venue has been greatly improving every year. The footing is great, there’s lots of warm-up rings and it’s a well-run, safe event. It just keeps getting better and better.”

Before the 2020 season of Kellerhouse events begins with the Galway Downs International in the spring, the venue hosts the 22nd annual staging of the Galway Downs Fundraiser. On Jan 18-19, Great Britain’s legendary eventer and coach Ian Stark headlines a roster of 20 of the region’s top professionals who donate their time coaching. Funds go toward continuing improvements for the equestrian facility.