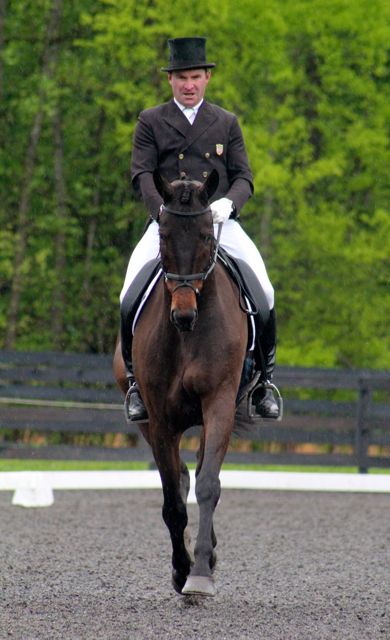 Philip and Mystery Whisper, tied for first in the CIC***. Photo taken from Samantha’s wonderful coverage.

Good morning EN! If you’re just checking in, the Fork is going down this weekend, and just about everyone who is anyone (when it comes to London) is competing this weekend. Phillip and Mystery Whisper are tied with Will Faudree and Parlow on an impressive 39.6 in the CIC***, followed by Michael Pollard on Jude’s Law and Karen on Mr. Medicott. Will Coleman leads A-A with Ideal Contini and Allison Springer and Arthur are winning the A-B with a 22.7, closely followed by Becky and Comet on a 23.7. Sinead and “Tate” are right on their tail with a 23, and Boyd and Neville round out the top four with a 26.7. In the CIC**, Karen has an eight point lead (on a 43.3) over herself with Mandiba and AF Amber Eyes, respectively.  OCET as Marilyn Little-Meredith is in third on RF Smoke On The Water. Keep scrolling down to read Samantha’s reports and more extensive coverage of dressage. Cross country begins today, good luck to all competitors! Keep checking back for more updates from Samantha, who will be on the show grounds all weekend. [Live Scores] [Ride Times]

Onto the rest of your links:

Rest in peace Chicago II, who was just euthanized after sustaining a devastating tendon injury during the cross country at Tweseldown on March 8. Chicago was competing in the Novice (equivalent to Prelim in the US) with Nicholas Lucey and was a former mount of Piggy French. EN sends condolences to Nicholas and everyone involved with Chicago over the course of his career.

Rest in peace Stunning, former rider of Mark Todd and William Fox-Pitt. Stunning was euthanized yesterday at age 26. Again, EN sends condolences to all involved with this special horse.

Aussies take the top three placings after dressage at Kihikihi. Shane Rose is in first with a 47.6.

Over 3,000 spectators came to day two of the Burnham Market International Horse Trials.

Discipline managers have been named for WEG 2014.

My personal favorite: Easter treats for your pony

The Chronicle has done another installment of their “Horse News of the Weird,” featuring Tim Tebow and the “Weird Horse” Twitter account. [Weird Horse]

Zenyatta’s halter sold at auction for a whopping $6,712.50. All proceeds will benefit the Bluegrass Chapter of the American Red Cross, specifically for storm relief.

The famous Seabiscut vs. War Admiral match race will be reenacted at the Kentucky Horse Park on Tuesday.

Modern Society, a skewbald colt and one of only two “painted” racehorses in England, will compete in the two-year-old race at Kempton Park today.

Horse rescued from ditch by firemen

Horse and Hound analyzes how the drought in England will affect horse owners.

A herd in Kentucyk is being assembled to study EMS (Equine Metabolic Syndrome, a disease that manifests itself as a predisposition to obesity- ever call your horse an “easy keeper?” He might have EMS)

Best of Blogs: Laine Ashker interviews Phillip and Will at the Fork

Theault made a cool video at the Fork

That’s all for now! Remember to check back for updates from the Fork and other events happening this weekend. Happy Easter/Passover to everyone!