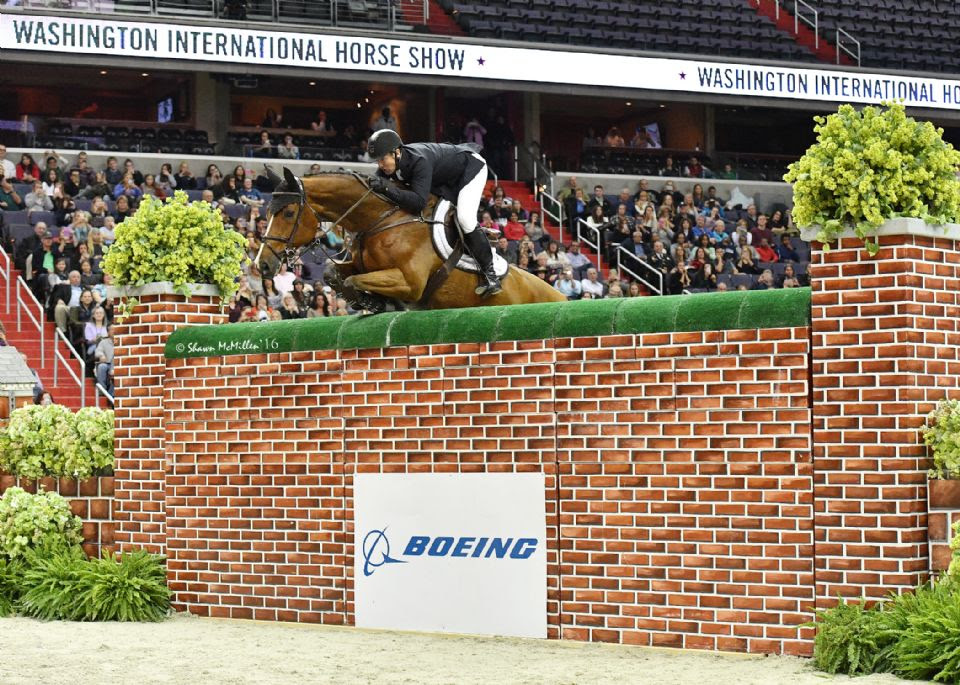 We interrupt our regular ‘Red on Right, Insanity in the Middle’ programming to bring you this brick wall from the Washington International Horse Show. Because frankly, we’re connoisseurs of insanity. We have a delicate palette for things that seem unimaginably ridiculous, but given the right person and the right horse is just another day at the office. And this flavor of refined insanity is right up our alley.

U.S. show jumping team Olympic silver medalist Mclain Ward and several-time Nations Cup team member Aaron Vale took it to the limit Friday night in the WIHS Puissance Class before ending the event in a tie after both mounts cleared the obstacle at seven feet even.

Mr. Ward strode to co-victory aboard his own ZZ Top vh Schaarbroek Z, a 15-year-old Zangersheide gelding who Ward has owned on and off throughout the years. Mclain said after the event, “This is only the second time I’ve shown him, so as far as I know this is the biggest he has jumped. He is a wonderful horse. I have bought and sold him a couple of times now. He has been a great horse for many people and after this he will probably go and be a great teacher for somebody else next year.”

Stunningly, the pair don’t seem to sacrifice an inch of form or precision in the name of insanity – instead Mclain maintains nearly perfect equitation, balance, and focus over the massive obstacle, to the utter delight of equitation coaches and forward seat militants ’round the globe.

Aaron Vale tied the marvelous feat aboard the ten-year-old Finou 4, a Hanoverian owned by Think Like a Horse and Don Stewart. He’ll also be riding Finou in the Grand Prix Saturday night. (Many show jumpers choose to maintain a mount who specializes in puissance, though riding in both is not uncommon.)

“He is a very fresh, energetic horse, so my plan was to jump him tonight to hopefully take the edge off him and give him some focus for tomorrow. He has a lot of power and he is pretty limber, so I had an idea he could maybe jump a big fence pretty well. The class was great fun and hopefully it sets me up pretty well for tomorrow night.” 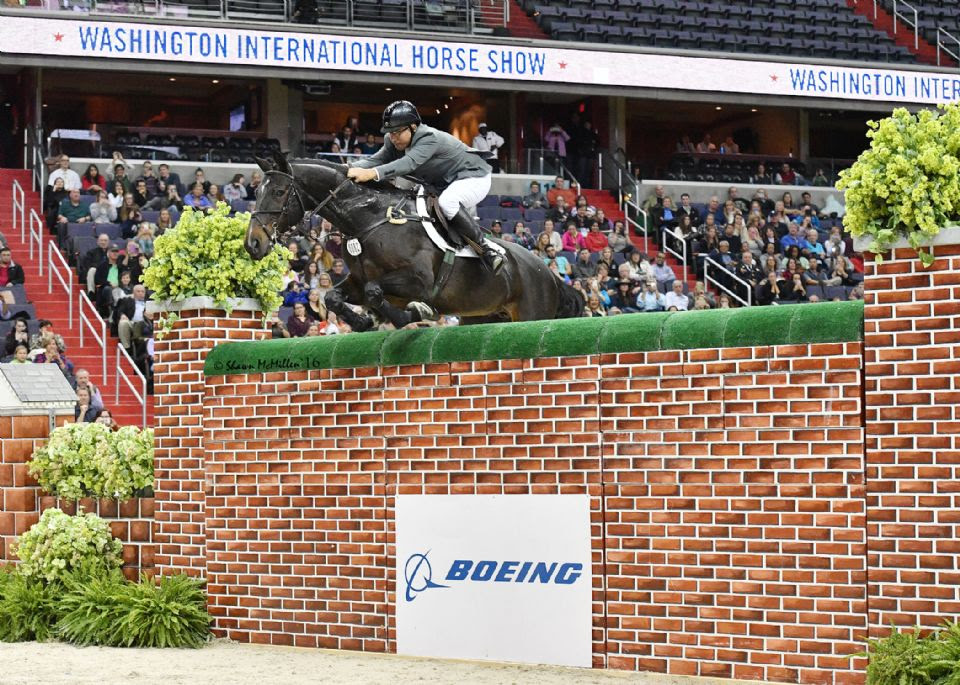 We’d be remiss not to mention the third place horse and rider as well: Lauren Tisbo and Mr. Visto, who not only attempted and nearly cleared the 6’6″ wall in their first ever puissance contest, but did it in a “war bridle”. The stallion goes lightly and cooperatively in the simple rawhide loop with no headstall, and Lauren swears by it for the horse, who says she’d never used anything like it until him.

Lauren Tisbo and her mount Mr. Visto easily clearing round 3 of the Puissance! pic.twitter.com/Ogar0Nfo3r

If you’re feeling the Washington International Horse Show spirit and want to follow along with all the insider details, photos and results, be sure to swing by our sister site Jumper Nation for all the hunter/jumper news your little eventing heart can handle. (Best of all, jumpers don’t have an off-season, they just move indoors or fly south. So the fun never ends!) You can also follow them on the regular by liking Jumper Nation’s Facebook Page or follow on Twitter.