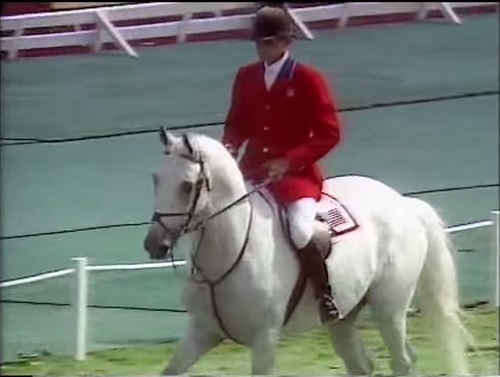 Growing up, the brilliant gray Thoroughbred show jumper Gem Twist was my idol.  Maybe it was the name, maybe the sparkling white coat, maybe just the way he soared so effortlessly over the fences, but he was THE horse I always remembered.  A three-time horse of the year, and Olympic silver medalist, Gem Twist was a legend in his own time with a long, long list of accomplishments.  But perhaps more importantly, he captured the hearts and minds of those who saw him compete.

Since his death in 2006, Gem Twist has been cloned.   “Gemini Twist” (2008) has been kept intact for breeding by Frank and Mary Chapot, and another clone, “Murka’s Gem” was born in 2011 and is pointed to a competition career by Team Murka.

Here is the original Gem Twist in all his glory at the WEG Stockholm in 1990 with Greg Best, where he was voted World’s Best Horse.