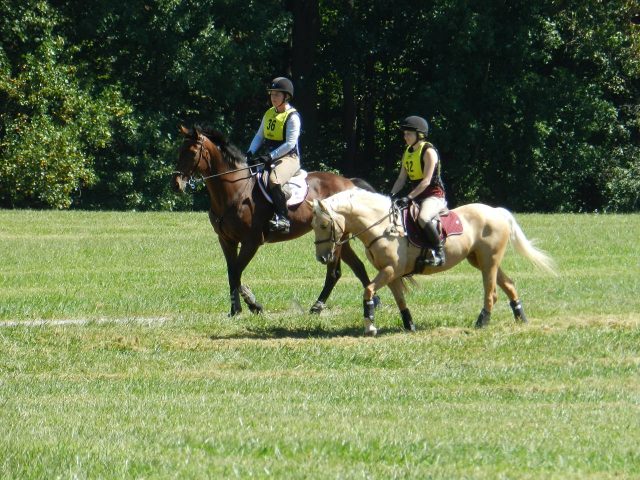 There have probably been a million blogs written on “how to cross country school,” and I guess this is the millionth-plus-one, but I’d like to talk about how I’ve learned to school my event horses over the years.

In the beginning, back in the Dark Ages, when I first was introduced to “horse trials” — there was no such thing as “schooling” a cross country course before you got to an event. I don’t recall being able to trailer to a course, and ride over the jumps there prior to the competition in the early days. We didn’t have very many events, most were a really long way away, and the crusty old military generals that built the courses didn’t want anyone to be anywhere near their precious courses until COMPETITION.  I remember one of these luminaries telling us all we “should have gone hunting all winter” to prepare — that would have been nice, if we lived closer than 1,000 miles from the nearest hunt. Hmmm. We built stuff at home and hoped it would do!

Later, when I moved to an area with more events, the concept of “going schooling” was a new thing we all moved heaven and earth to be able to do. We’d all go together in a group, spent most of a day, rode over the whole property and jumped, jumped, jumped. Then we’d go back to the trailers, eat and drink or picnic, do up our horses and ship home. The fee was like $10. We’d all sleep well that night!

Later, when the first USCTA Book of Eventing was published, we discovered that some people made their own water jumps at home (there were instructions!) and we thought that was a great idea and much better than zooming out to the barn to ride immediately after a monsoon. We used to drag jumps to the edge of the large puddles/small lakes in the arena immediately after large thunderstorms, quickly tack up and warmup, and splash through pretending we were jumping water jumps before the water drained into the sandy soil.

Mostly, we just got to the events crossing our fingers that we’d jumped enough at home, and would walk the courses with a mixture of trepidation, fear and cold sweat. There were a LOT more built-in, solid jumps in those days, and lots of stuff that was pretty unforgiving of mistakes even at the lowest levels. I clearly remember jumping solid log bounces, jumping docks IN water, jumping off docks into water, hayracks with totally false groundlines, and solid corners canted on the downhill, among other pretty gnarly stuff. There has been good change since those days!

Since those old days, I have since learned so much more about how to teach a horse to like cross country, and most of it has come from the close supervision and coaching from very good instructors. Far from the winging-it days, now I do it differently — and I have to think it’s a lot easier on the horses.

And in the decades I’ve been hauling horses to cross country courses I have learned that horses do understand and retain the things they are taught and exposed to, and that riders should think about what you expect your horse to do and how he feels about it when you ask. I know I don’t ride like I used to years ago, where we galloped at it and hoped for the best; today I think I try a bit more to be a better and more sympathetic rider, with more skill and less seat-of-the-pants technique.

When USET rider and top horsewoman Bonnie Mosser first coached me at Fair Hill in the Sawmill Field, she concentrated on my position and getting my horse in front of my leg. Rather than just fly around jumping willy nilly, it was organized. My riding reminders: stay in balance, do not catch the mouth, look where we wanted to go and where we wanted the feet to be when we landed. I was a disaster! I hung on my poor horse’s mouth, pinched on my knees, fell off over every drop, and had no clue how to get the poor thing through the water. For some reason, Bonnie magnanimously took me on (probably because she felt so sorry for my good horse) and completely improved my riding and my understanding of what I was trying to do on cross country. I owe much of what I learned about cross country riding from people like Bonnie, and am grateful for every lesson I was able to have with these top level riders — they have made my experience in eventing very enjoyable. And my horses would probably agree!

These concentrated lessons on MY position and MY riding really ended up helping my horses. It wasn’t a matter of “him doing this and that.” It was more ME being in balance and not interfering, and letting him do the job. Cross country schooling really is about riding across the country with your horse, with the least amount of work and interference, isn’t it? So easy to say — so hard to do!

Added to the position education were also often-detailed discussions about how to ride certain fences, such as questions with downhill approaches, drops, water, jumps on a curve, using momentum, achieving a more balanced gallop, and more. You learned even more on course walks with these riders at local events and horse trials, and the instruction would back up what you did when you came back and schooled a week later.

An early lesson I learned to hack about the field to warm up, letting my horse look and absorb, perhaps even to walk quietly through the water on the way to warmup, without jumping anything (a great way to introduce it to your horse before asking them to associate jumping with it).  And I learned that on the warmup trot, as a rider it was my responsibility to tighten my girth, check my reins, carry my bat, have on my gloves and spurs; and also to be observant on the warmup, checking the footing, looking at the landings and take-offs of jumps as I hacked past, watching out for holes or rocks, noticing where the greenhead flies might be and also the wasps! And if it didn’t look good — we didn’t do it.

I learned to gauge my horse’s interest and enthusiasm by cantering a big warmup circle, sending them forward, then bringing them back a few times, to see how the brakes and steering and gas pedal worked on the day. Sometimes we would find out in the first five minutes that we’d need a stronger bit, or different tack, long before we would start jumping, and would make a quick change to keep the session productive.

I learned that we always start with a simple, straightforward fence with a good ground line, like a log, and always a level below our current ability. We keep it low and correct, working on basics for the first third of the session. We then would move on to the second third of the lesson, where we would jump a few more difficult fences or take on something spooky or more complicated — a downhill jump, a turning question, something requiring a change of position and adjustment in stride. The last third would be spent on the most difficult things, because we were now warmed up and in front of the leg. That would be the time for attempting the coffins, water, drops and combinations. Then as a final test we might jump a few jumps in a row, and would quit on a good note with lots of praise and walk to cool out.

Of course, if anything went wrong, we’d work on it; and sometimes we’d change the order of difficulty around, or drop down a level and create confidence, if someone got scared or had a problem. We worked most of the time in small groups with similar jumping ability so we could school approximately the same jumps in the same portion of the field together. We also learned from watching one another, too! And throughout we kept moving. It was rare to park and sit — keeping your horse warm and walking was done so they would be ready when it was your turn at an obstacle. Cross country is not like a lesson at home; the horses need to relate to jumping a course and going from one question to the next as a whole, not as jump, rest, jump, rest. Tips like these I learned over the years working with people who have decades of experience making event horses.

For me, having those eyes on the ground from a very knowledgeable and experienced instructor made a huge difference in how my horse perceived cross country. It became something like a fun game we both enjoyed. That is always how I think a cross country schooling should be for both humans and horses. I really didn’t know how to methodically school a horse over cross country and simulate that fun game, until I got knowledgeable help. And I’m glad courses are different from the old days, too!