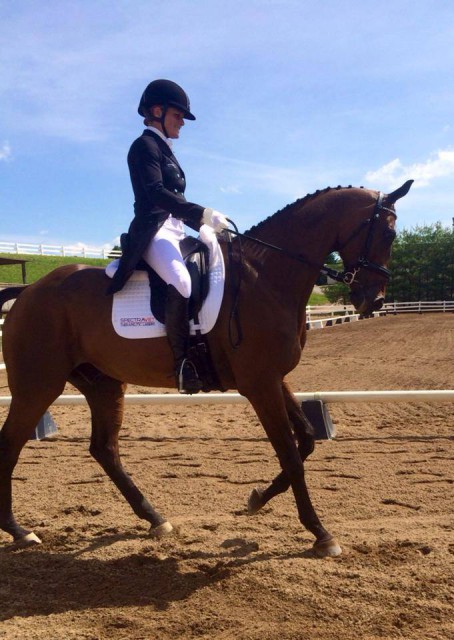 Kim Severson and her super young horse Cooley Cross Border are leading the CIC2* after jumping the only clear show jumping round. They sat in fifth place after dressage and hold the overnight lead on their dressage score of 47.1. Phillip Dutton and Atlas, the leaders after dressage, dropped one rail to move down a spot to second place on 47.2. His second ride in the division, Mighty Nice — who is preparing for the Luhmuhlen CCI4* next month — is right behind in third place; Happy also pulled one rail for a score of 47.7 going into cross country.

Lauren Kieffer and RF Cosima are leading the small Advanced/Intermediate division on their dressage score of 30.0 after jumping clear. Jan Byyny and Inimdair jumped the only other clear show jumping round in the division to move up from fifth after dressage to second place on a score of 36.0. Caitlin Silliman and Catch A Star round out the top three on a score of 38.4 after pulling one rail. Lynn Symansky and Donner scored 31.6 in the dressage and then withdrew as planned, as Lynn is still recovering from the leg injury she sustained at Jersey Fresh; the horse stepped on her with his studs after they parted ways at the water.

Courtney Cooper and R Star held their early lead the Open Intermediate despite pulling one rail in the show jumping for a score of 33.6 to take into cross country. Sally Cousins and Ideal Contini jumped clear to move up from eighth to equal second place on 37.4, followed by Phillip Dutton and Mansfield Mark, who also jumped clear to sit next to Sally and Taz on the leaderboard.

Sue Jellum and Rochambeau lead the big 41-horse CCI* division on a score of 47.3. Phillip Dutton and Good Enough are sitting in equal second place with Allison Thompson and Merlot 325 on scores of 48.6. In the CCI*JY, Asa Cooper and Urlanmore Beauty lead on 43.4, followed by Allie Nelson and Total Eclipse in second place on 45.6 and Margret Schaeffer and Grey Area in third place on 46.0. 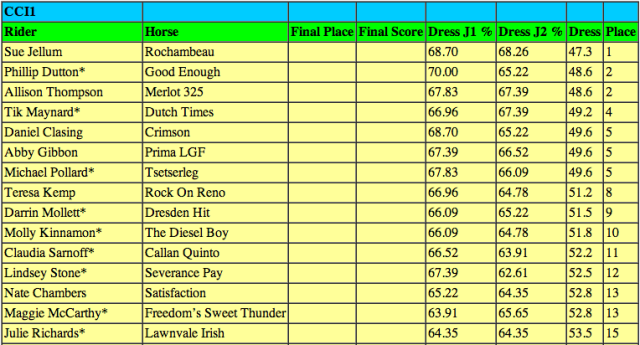