The first thing that we noticed was that one could definitely tell Selena is Canadian. Or is that part polar bear? While most of us ‘hardy’ eventers, gathered in the freezing cold morning, were huddling under layers of polar fleece and down, Selena casually set fences sans gloves, popped in and out of her jacket, and seemed quite impervious to the frosty morning. 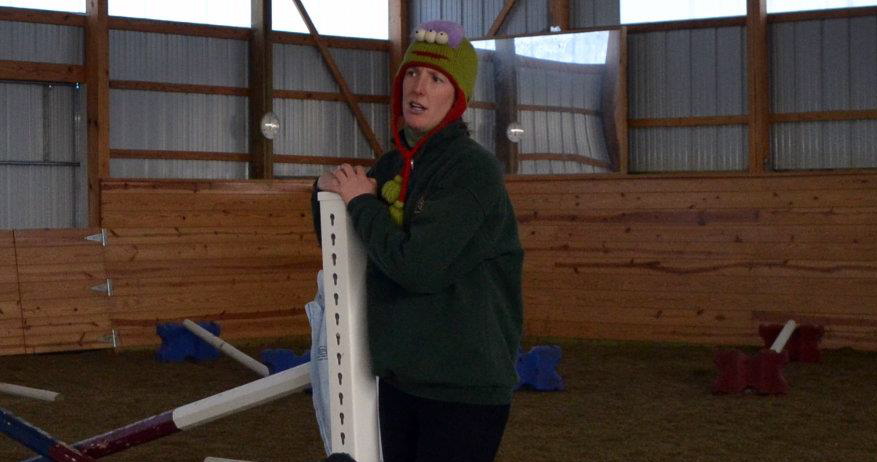 In the frozen north, a.k.a. Area 1, competition season has been over for quite a while so eventers in the Burlington area of Vermont jumped (no pun intended) at a chance to clinic in Arbrook Farm’s indoor arena with one of Canada’s finest riders. Fresh off her time with Mark Todd (jealous much?!) Selena set up some Chinese pole torture grids similar to what she had worked on with Toddy and the Team.

The groups ranged from beginner novice to preliminary but the basic exercises and lines remained much the same for all. Every group started over a small vertical with placing rails on either side. Selena has an eagle eye and this, the simplest of exercises, allowed her to ream educate all of us on our positions right from the get go. Good times! Twisting bodies, looking down, falling back, falling forward, falling right–well, the list might be embarrassingly long to go through–let’s just say Selena caught ALL of our flaws. But instead of reading us a list of do’s and do NOT’s, she tried to come up with one word or phrase that each rider could keep in their head throughout the rest of the work to correct their particular issue. For example, one rider, who was working on stilling her upper body, was told to pretend there was a wineglass on her head. By saying “wineglass” over and over to herself throughout the exercises she remembered to hold herself up more but was also able to think about where she was going and what her horse was doing. 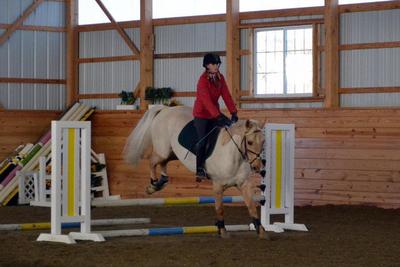 Next up was a set of canter poles set in a fan in one corner of the arena, five poles total. Once all the horses could move through and maintain their line in the middle of each pole, the center three poles were raised just 6 inches off the ground to create a tiny double bounce. 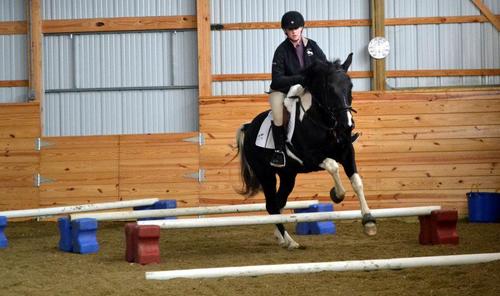 Shelby Hanlon on Cash and Roll

Once the poles were raised the emphasis remained on maintaining a line through the middle of the poles. 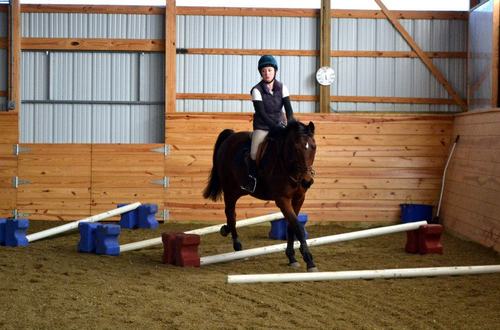 A horse in the middle–Samantha Simms on Simba 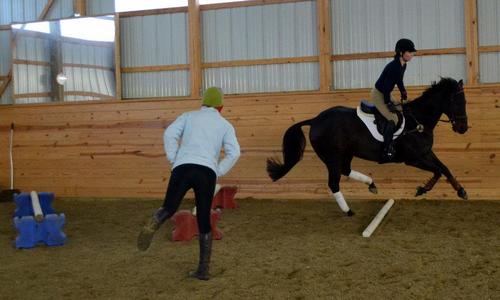 A horse NOT in the middle (It’s ok. I can say it since that’s me)–Christina Reiter on Our Mind

As Selena pointed out, for those of us who are forced inside for the winter, you’ll notice that the horses start sticking to the wall and this work certainly remedies that problem (among many others). One horse–who may or may not have had the most experience in the groups–demonstrated the phenomenon by joyously rubbing his rider against the wall a few times.

From the bounces we moved on to a serpentine exercise. Two verticals were set up so a three-loop serpentine was ridden across the arena with a finishing line of a shallower serpentine down the length of the arena. The final line consisted of a placing rail, cross-rail, one stride, oxer combo to an offset rail on the ground to a finishing vertical (a skinny one for the prelim group).  See diagram A below because it’s kinda hard to explain. 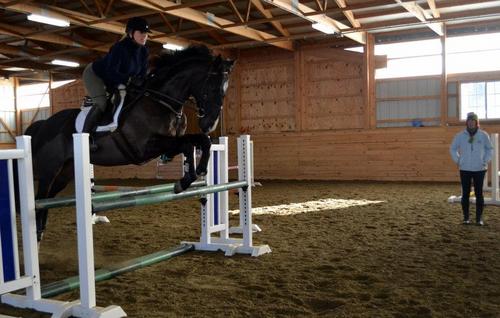 Over the oxer–Dorothy van Gerbig and Tabasco Lad

Again, precision was key and much of the emphasis was on maintaining a line through the middle of each element. Achieving turns early to allow for plenty of straight strides became key here. The rail on the ground was supposed to set us up for a nice flying change halfway through the line but only two riders achieved that feat throughout the entire day (insert red face here, hat tip to John Bourgoin and Amy Wright).

Finally one more line (vertical, 4 or 5 strides to an oxer, to another vertical) was added and all the elements were put together. It seemed that no matter the level, the basic problems remained the same, changing only in the degree.

Selena really loves to count the rhythm and encouraged all of us to do likewise.  To one participant she encouraged listening to “the rhythm of the grid”–explaining that after you have run through an exercise a couple of times you should be able to hear whether the horses hoof-beats are falling correctly.

Selena also encouraged many of us to steer more with the “V” of our thighs–a technique that was particularly handy when in the shallow serpentine line. We all know in theory that we need to steer with our legs rather than solely relying on our hands but this was a new presentation of that idea for many of us and one that created concrete results. 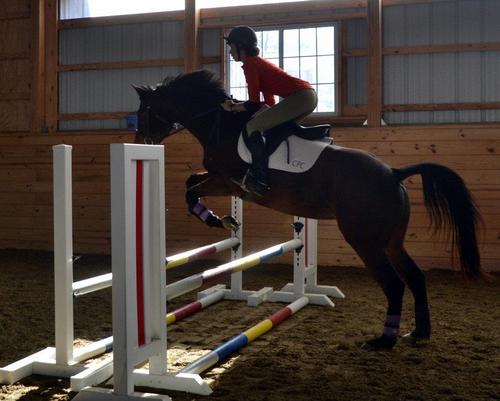 In the final line–Isabella Carrara and Cleo 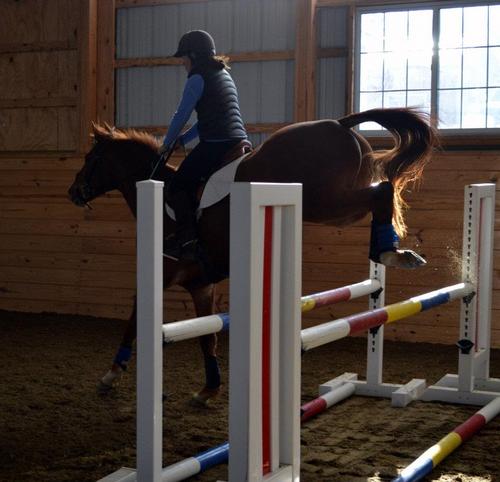 Riding a spooky horse through the final line, gosh that peanut gallery is scary! Sofie Van Olmen on Watson’s Waldo

Everyone had a grand time and went away with plenty of “homework.” Many thanks to John Bourgoin, Arbrook Farm, and Selena O’Hanlon for a wonderful day! Thanks for reading, GO EVENTING! 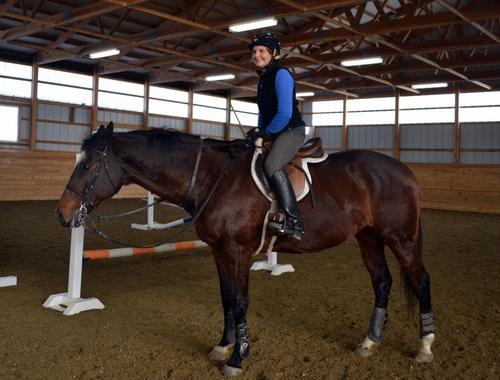 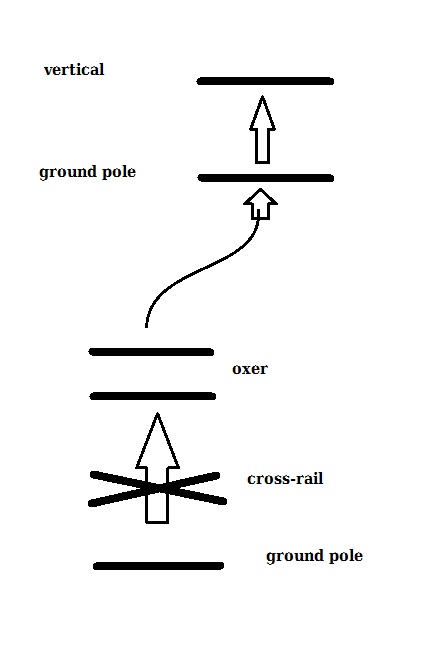