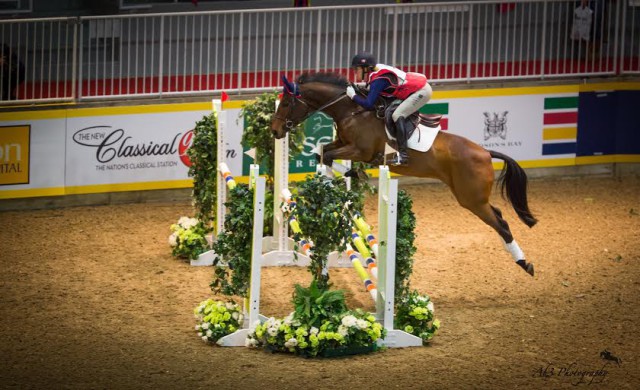 Selena O'Hanlon and A First Romance before the fall at The Royal. Photo courtesy of Alec Thayer.

Selena O’Hanlon is on the mend after taking a nasty spill with A First Romance off a bank at the Horseware Indoor Eventing Challenge at The Royal on Friday night. She broke her left collarbone in the fall, while “Solo” is thankfully uninjured.

“I’m waiting to see a specialist and can’t move it for two weeks minimum,” Selena said. “It ruined my plans to go to Bruce Davidson’s for this week. I was meant to head down Monday returning Thursday. Guest not, eh?”

She said she’s not entirely sure what happened, as Solo felt great jumping up the bank. She thinks he might have slid too close to the brush, peaked and got his front boots tangled up, which caused him to fall.

“It was just a freak accident,” she said. “He’s never made a mistake before. He’s so careful and a freakishly good jumper. I’m just so grateful he was not injured. I only hope his confidence is not shaken.”

Selena’s mom, Morag, is also laid up currently after having knee replacement surgery earlier this fall, and she said it’s not exactly an ideal time to be sidelined — “not that it’s ever a good time to break!”

We’re glad to see Selena is in good spirits and wish both her and Morag speedy healing thoughts.

Update 3:30 p.m. EST: Selena will have surgery this week after being told by her specialist that she has a “unique” break. Here’s the x-ray. Pretty impressive, right? Get well soon, Selena! 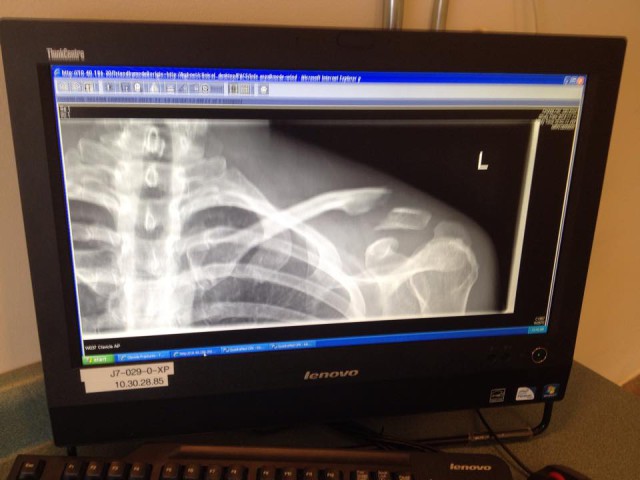