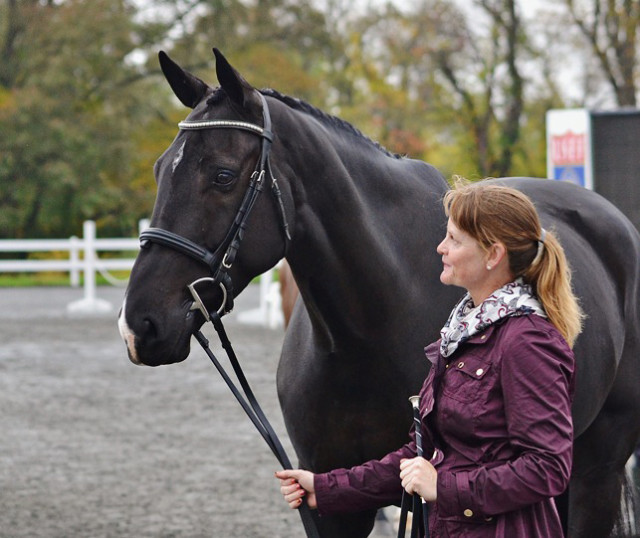 Kim Severson and Cooley Cross Border were the winners of the CCI1* at the Virginia Horse Trials two years ago and ninth in the CIC2* in 2014. This weekend they returned to the Virginia Horse Park in Lexington, Virginia to win the CIC2*, leading a division of 30 starters from the beginning and finishing on their dressage score of 35.8.

This is the first FEI outing Kim and Cross have completed since Fair Hill in October, where they were second in the CCI2*. There are a couple of blips on the 8-year-old Irish gelding’s cross country record since then, but when this pair is on it they are unstoppable.

More than 7 penalty points behind them in second place is Will Faudree and Jennifer Mosing and Sterling Silver Stable’s Caeleste, who added just 1.6 time penalties to their score to maintain the same position throughout the event. Will is also third with Pfun, who was recently named as an alternate to the Pan American Games team. Pfun, also owned by Jennifer and Sterling Silver Stables, finished on his dressage score of 44.7; they timed their cross country round perfectly, finishing exactly on the optimum time of 6:07.

Fourth place Sable Giesler (CAN) and Devil Munchkin added no penalties to their initial score, redemption for having parted ways in the water complex at Jersey Fresh.

Doug Payne and Lysander are on a roll this spring. The big (17.3 hands) Oldenburg/Thoroughbred gelding jointly owned by Doug and Kristin Michaloski, have finished in the top five in all three FEI appearances this year, most recently coming second in the CIC2* at Jersey Fresh. 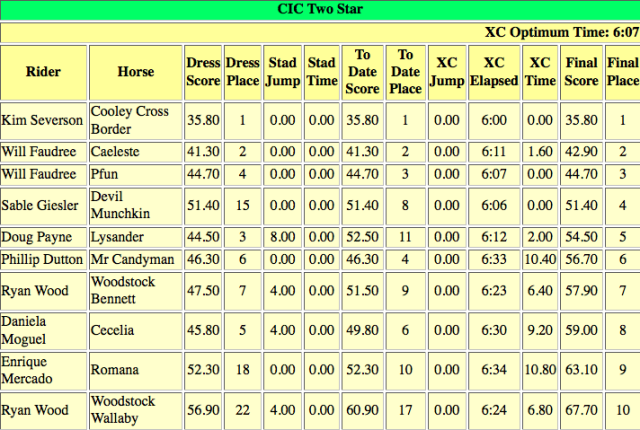 Fernhill Singapore is a Dutch-bred Warmblood gelding owned by Sue and Shawn Foley. He did his first horse trials at Beginner Novice last summer and has been competed by both Waylon Roberts and Phillip Dutton as he moved up the levels, earning a win at each grade. Now at just six years of age and one year into the sport, Singapore is a one-star winner, topping a competitive CCI* division at Virginia. Did we mention this was his first FEI appearance?

Colleen Rutledge and 7-year-old Roulette, an Oldenburg gelding owned by Leslie Schulz and bred by Cynthia Mcnemar, also had an impressive first CCI* outing. The only pair to break into the 30s, they held on to their score and the lead until two rails dropped them to second place in the final phase.

According to Colleen’s Facebook page, Roulette won the Best Conditioned award, which is becoming a habit for Colleen’s horses. Her Hanoverian gelding Escot 6 won the same award at the Jersey Fresh CCI3* two weeks ago. Pretty impressive for two warmbloods! 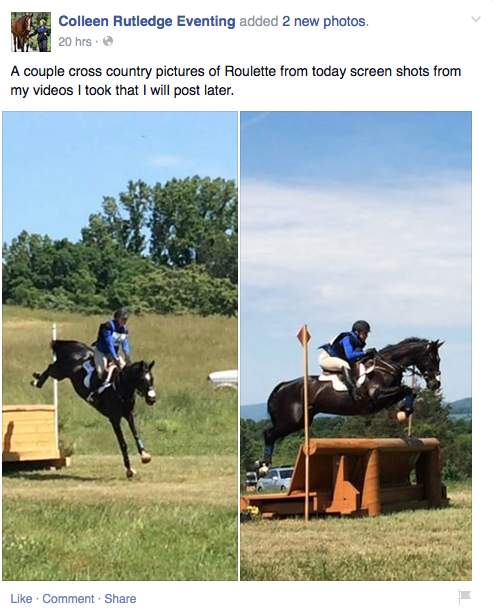 It is too cool to see two former four-star horses in the top ten in the one-star. London Olympic Games team horse Twizzel, ridden at the four-star level for four years by Will Coleman, is now 19 years of age and showing no signs of slowing down. He’s now partnered up with 17-year-old Morgan Booth. They were second in the CIC1* at Fair Hill last month and picked up a third place finish at Virginia, adding just one rail to their score. 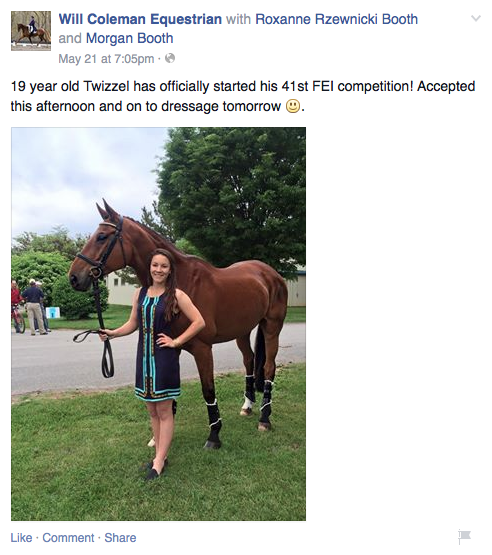 Remington XXV, also 19, had a long and successful career with Boyd Martin. Caitlin Silliman rode him at the two- and three-star level before he was officially retired from upper level eventing to enjoy the next chapter of his career with Camilla Grover-Dodge, granddaughter of Remington’s owners, Densey and Ron Juvonen. Incidentally, they were the pair that finished ahead of Morgan and Twizzel at the Fair Hill April Horse Trials, which was Camilla’s first FEI competition. They had a good performance at Virginia also, adding one rail to their score to finish seventh in a large division.

Shoutout to Emily Rzucidio and Ladybug Traveler, Heather Johnson and The Manx Man, Kathy Cain and Legal Limit, and Quinn Riddle and Folk Hero. They were the only pairs in the class to finish on their dressage score, and they were rewarded with big moves on the leaderboard. While the cross country was not too troublesome for most competitors, the show jumping proved to be particularly influential. 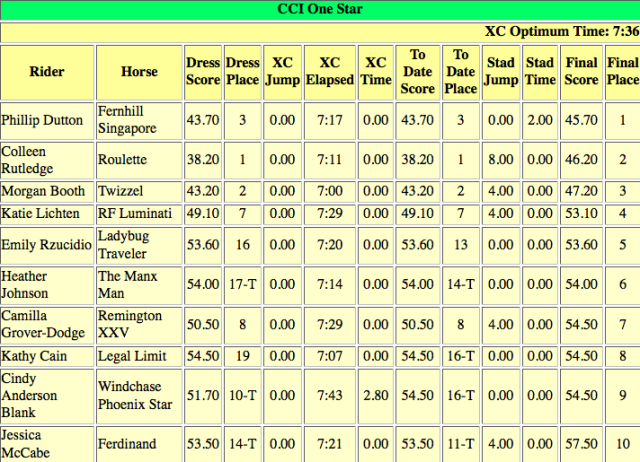 In the Advanced/Intermediate division, Emily Pestl-Dimmitt and Airlington won with the only clear show jumping round and the fewest time penalties across the country. Emily originally hails from Washington state and had come East to work with Liz Halliday-Sharp and get some new experience.

Michael Pollard and the Trakehner stallion Halimey picked up their third Intermediate win this year in the Intermediate A division. Young Rider Nicole Doolittle and Tops were the winners of Intermediate-B having given themselves some breathing room with a very good dressage score of 26.3. Marilyn Little picked up second place in both Intermediate divisions, with RF Demeter in division A and RF Quarterman in division B.

Moving now to the opposite coast, the Spring Event at Woodside had a good turnout at the Horse Park at Woodside. We’ve been covering the popular Preliminary Challenge all weekend. You can check out that coverage here.

This weekend featured the highly anticipated debut of Ian Stark’s redesigned cross country course (see the Advanced course walk here). Ian has become a staple of West Coast course design, as he designs at Galway Downs and the Event at Rebecca Farm. He came on board at Woodside in December and has been hard at work expanding the course to new areas of the Horse Park to utilize new terrain and open the course up to a bit more galloping. The new course seems to have been well received by the competitors at all levels. 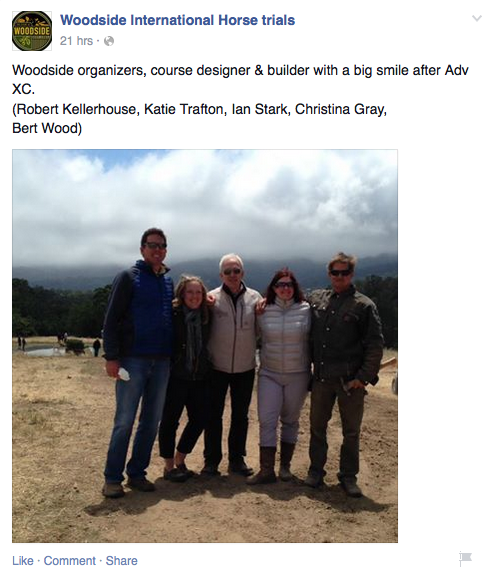 Statistics guru Maggie predicted James Alliston and Tivoli to win the Advanced division at Woodside, and she was right again. In fact, she correctly predicted the top two. Kiyomi Foster and Tasman Sea had a good weekend adding only time penalties to their score. James and Tivoli parted ways at the Land Rover Hollow at Rolex last month, so this win is a nice turnaround.

Posted by Woodside International Horse trials on Sunday, May 24, 2015

Amber Levine and Guiness St James, owned by Valorie Mackey, picked up their first Intermediate win, which is particularly impressive considering they were competing Training at this event last year. They were well ahead of second place Lauren Burnell and Counterpoint after cross country, so a single rail didn’t affect their placing. Amber was also fourth with Carry On. Tamra Smith and Dempsey rounded out the top three. 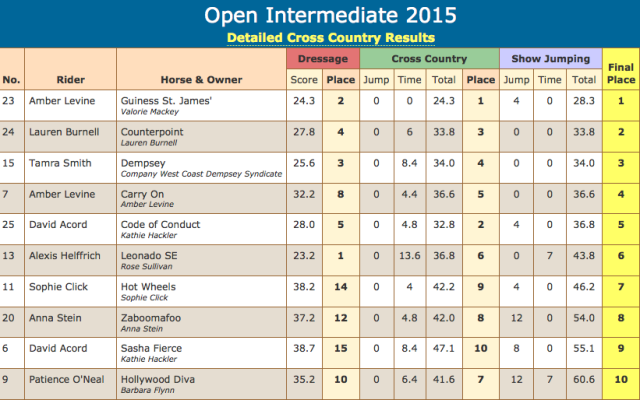 May-Daze at the Kentucky Horse Park is always well attended, and this weekend more than 500 horses from approximately 20 states competed, from Starter all the way up to Intermediate.

Adult Amateur Selena Pape of Louisville, Kentucky and her own Holsteiner mare Vanity’s first horse trials together was at May-Daze in 2010, when they competed at Beginner Novice, and they’ve returned almost every year since as they worked their way up the levels. They did their first Intermediate event in 2012 and have several wins under their belt, including winning the Area VIII Intermediate championship at the KY Classique last year.

Their win this weekend must be a rewarding one, having once again returned to where it all began and leading the Open Intermediate division from the start. Starting out with a good score of 25.4, they posted one of a few double-clear show jumping rounds and had one of the faster times on cross country to finish on a 31.4.

Second place went to Holly Shine and Sunday Afternoon Mission, who also show jumped double clear to move them from fifth to third. A fast cross country round moved them up again to second. Erin Pullen and Ben moved up from seventh to finish third. The big leap award goes to Jesslyn Woodall and The Luckdragon, whose good jumping rounds moved them up from 20th place to finish fourth. 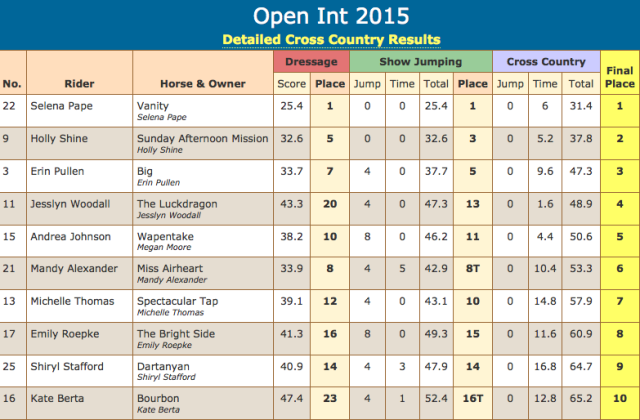 May-Daze  at the Park Horse Trials

Not to be forgotten, here are links for the other events that took place this Memorial Day weekend. Congratulations competitors on a great weekend of competition! Go Eventing.