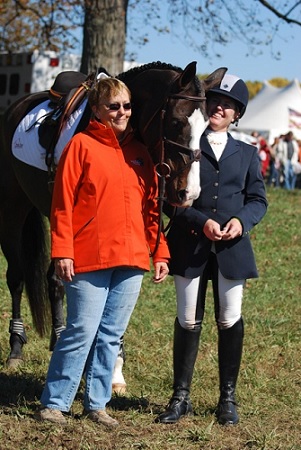 The Professional Riders Organization has announced that Sharon Weber was selected as the recipient of the 2013 As You Like It Owner’s Award.  Mrs. Weber will be honored December 6, 2013 at 6:30 PM at the PRO Awards Reception at the Hyatt Regency in Cincinnati, Ohio site of the 2013 USEA Annual Convention.  She will receive a Waterford Crystal Trophy and $5,000 in prize money that shall be donated in her name to any PRO Tour Series event of her choice.

Sharon Weber has been involved in the sport of eventing as an owner for Sharon White for seventeen years. She first got involved in the sport with her daughter, Emily Weber, who trained with White at their local pony club and rode up through the two star level. Mrs. Weber is a retired high school math teacher who loved the sport and wanted to stay involved after her daughter’s eventual marriage and family prevented her participation in the sport. Mrs. Weber currently owns Music Man II for White and shares ownership of Wundermaske with White. She previously owned Willpower who was campaigned by White. Mrs. Weber has also owned Rum Tum Tugger, Charlie’s Quest, Raise a Liberty, Long Tall Sally, Quest and Canelle for her daughter.

“Sheri has stood behind me unwaveringly for years, never expecting anything in return, just loving the sport, the horses, and her rider. She is willing to give whatever she has. There is nothing more influential on a rider’s career than the quiet confidence of someone believing in you, always being there no matter what, and never doubting you,” expressed White. “Sheri stands for the backbone of our sport, the grass roots love of eventing, the willingness to put whatever you’ve got into the love of the horse, the rider, and the eventing community. This influences the sport of eventing more than anything else, and is what makes our sport so different and so special.”

Sara Kozumplik-Murphy started the PRO As You Like It Owner’s Award in honor of her horse former upper level horse As You Like It. The award is offered annually to an owner who has had a large impact on a rider’s career and made exceptional contributions to the sport of eventing. Kozumplik-Murphy, also a friend of Mrs. Weber through Pony Club noted: “Sheri is the epitome of what the eventing story can be – from pony club beginnings to international owner. This is what makes her stand out and why she deserves the As You Like It Owners Award.”

“Perhaps like no other sport, owners make such a great impact on both an individual rider and the sport as a whole,” said Mark Hart, MD Chair of the PRO Awards Committee. “We encourage the riders to honor their owners by sending in a nomination each year.”