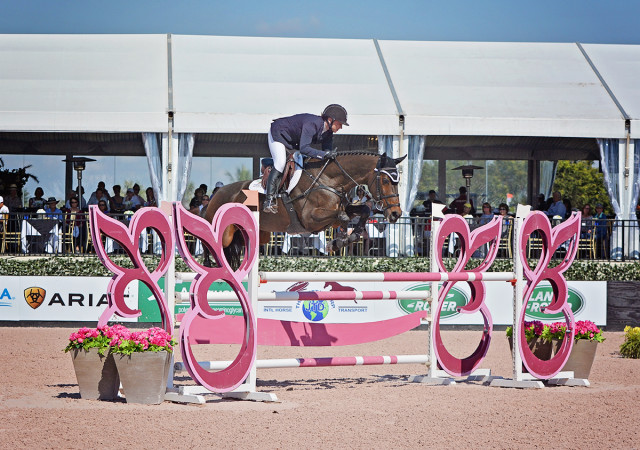 Marilyn Little and RF Scandalous jumped one of the 12 clear show jumping rounds inside the time at the $100,000 Land Rover Wellington Eventing Showcase to remain on 24.9 and defend their dressage lead as we count down to the 1 p.m. EST start of cross country. It’s a quick turnaround so this is your lightning fast show jumping report.

Boyd Martin and Welcome Shadow’s clear round moved them up one spot to second place on 26.5, which gives Marilyn and RF Scandalous just 1.6 penalties of breathing room on a cross country course that is expected to be influential when it comes to time.

Richard Jeffery’s show jumping track proved equally influential, with rails falling throughout. The triple combination, which served as the final element on the course, proved especially tricky, with the final fence coming down numerous times. Ryan Wood and Powell, who were sitting in second place after dressage, came to grief at the triple, pulling three rails to slip down the leaderboard. 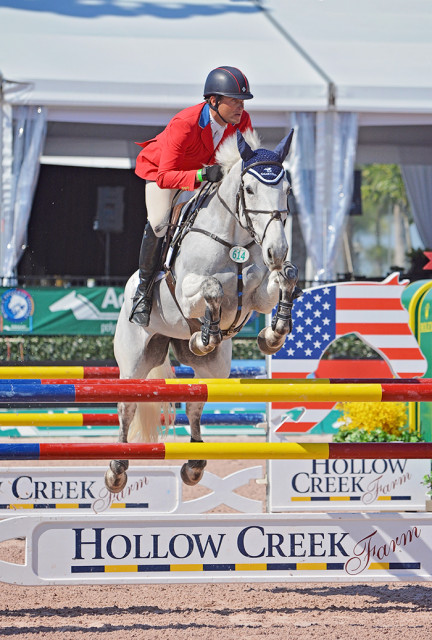 Allison Springer and Arthur moved from fifth up to third on 27.2 with a beautiful clear round inside the time, and the look on her face after as she gave him a big pat said it all. Good boy, Arthur! Kim Severson and Cooley Cross Border also left all the poles in the cups to move from seventh to fourth on 28.0. Marilyn Little also has her other ride, RF Demeter, in the top five thanks to a clear round, which moved them from ninth to fifth on 29.4.

Buck Davidson has two rides in the top 10, with Petite Flower jumping clear and inside the time to move from 13th to sixth on 30.9. He had the last fence of the triple combination down with Carlevo to slip from sixth to eighth on 31.5. Liz Halliday-Sharp and Fernhill By Night are sandwiched between in seventh place, with a clear round and 2 time penalties moving them up one spot to seventh on 31.5. 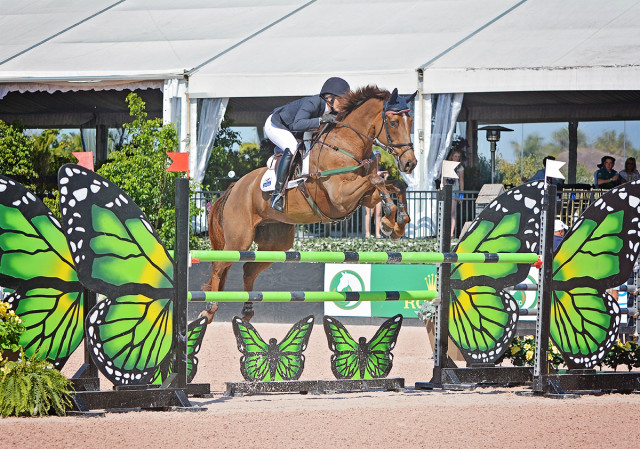 We have a sibling rivalry rounding out the top 10, with Doug Payne and Vandiver in ninth on 34.2 after taking the final jump of the triple combination. Holly Payne Caravella and Never OutFoxed jumped clear and inside the time to win our Biggest Mover Award, scooting up from 24th to 10th on 34.6.

In addition to the pairs already named, the following horses and riders jumped clear and inside the time: Jennie Brannigan and Ibella (tied for 12th, 34.7), Angela Bowles with both Bliss III (16th, 35.6) and Novelle (25th, 41.5), Ryan Wood and Fernhill Classic (17th, 36.2), and Erin Sylvester and Mettraise (23rd, 39.0). Marilyn Little and Angela Bowles are the only two riders who delivered clear rounds with both of their horses.

We did have one combination eliminated when Long Island T refused twice at the third fence with Boyd Martin; they were tied for 14th place after dressage. Deniro Z refused at fence two with Liz Halliday-Sharp, and she has since withdrawn him. Hannah Sue Burnett also withdrew Harbour Pilot and Under Suspection after show jumping, and Clayton Fredericks withdrew Houdini and Foreign Affair.

Just one down for Sara Kozumplik Murphy and Rubens D’Ysieux. What an incredible jumper! #wellingtonshowcase

One other thing of note: This sport is so much about the partnership with our horses, which was emulated so beautifully when Sara Kozumplik Murphy gave Rubens D’Ysieux a big pat and a treat to thank him for his effort just after finishing their round. How lucky are we to have these incredible athletes in our lives?

Cross country starts at 1 p.m. EST and will stream live at tv.coth.com. Click here for the order of go. Click here for a fence-by-fence preview of Capt. Mark Phillips’ course. Kate Samuels is my wingman today and is doing a super amazing job of getting photos up on EN’s Instagram, so be sure to keep following along for all the latest. Go Eventing.