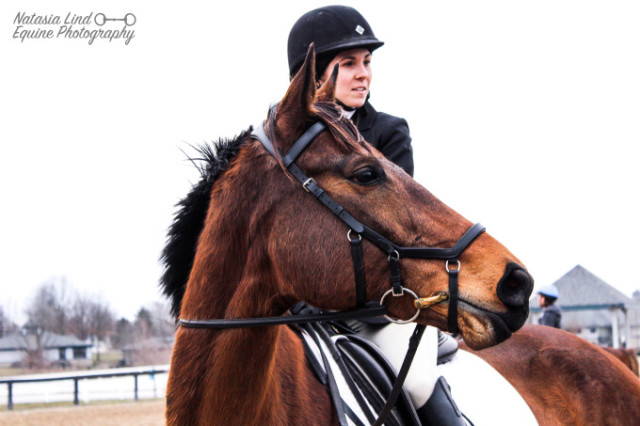 Last Saturday morning, on an unseasonably warm day in February, I hooked up my trailer and tried not to think about what I was doing. I loaded my 17-hand dragon of a Thoroughbred and hauled 10 minutes down the road to a small dressage show at the Kentucky Horse Park. I hadn’t had the courage to show him in over a year. I was nervous, I was scared of him, and I was fully ready to be publicly embarrassed by what I knew would be a sad attempt at dressage.

But, trying to take my mind off the impending train wreck, I made three goals: one easy, one attainable, and one possibly pushing it.

With my three goals in mind, I saddled up my dragon horse and crossed every bone in my body that we’d make it through in one piece.

Much to my surprise, my dragon turned into a puppy from the moment a stepped into the stirrups. Lou carried me through an extremely hectic warm-up without so much as batting an eye. He tested me as we stepped into the covered arena, questioning whether we really had to go dance in the sandbox and not quite believing me when I told him that the letters were not horse-eating monsters. But, with the help of some wonderful friends offering advice and support, we trotted down centerline and, three minutes later, we halted at X still in one piece.

I fought back tears as I thanked the judge and choked back a sob when she told me I had a nice horse on my hands. I knew that, I had always known that, but I never thought it would come to fruition. So, as we headed back to the trailer I couldn’t contain my smile that we had actually accomplished something in our partnership. The color of the ribbon, if I even got one, didn’t even cross my mind, because in my heart I knew that we had just passed a huge milestone and no score, comment, ribbon (or lack thereof) could take that away.

So, later, when I headed back into the show office to collect my test, eager to see what the judge had said and to start working harder on any shortcomings they pointed out, I was in awe to see a blue ribbon clipped to a test with my number on it!

Lou wondering what all the fuss is about. Photo courtesy of Brooke Schafer.

That blue ribbon didn’t mean that I was better than the other riders. It didn’t mean my horse was fancier or that we worked harder. It didn’t tell me that we were superior in any way. No, that $3 blue ribbon quietly told me that there was hope. It humbled me as it whispered “I told you so, if you had just listened before.” It reminded me that for so long doubt and uncertainty had ruled me, letting opportunities pass me by that should have been mine for the taking. If I had just had the courage to try.

A year ago, all of the hope that originally filled me when I brought Lou home was gone. After our move to the bluegrass state, he was unmanageable, he was dangerous. With many tears and sleepless nights I had accepted the fact that what I thought was my upper level prospect was only ever going to be a fancy, prancing pasture ornament. When people would ask me about him, my dejected response was always something along the lines of “He’s broken,” “His brain doesn’t work,” or “Who knows what’s going to happen with him.”

I had tried my best to figure him out and my best didn’t seem to be good enough. The horse that once had a bright future had totally dissolved before my eyes. I was ready to give up when, one fateful day, I spent FOUR LONG HOURS (seriously) trying to catch him. Right then and there, I told myself something needed to change. This was not an abused pony that was fearful of people. He had no excuse and neither did I. He had my number and it was all my fault. But I was not going to let what could possibly be the best horse that I’d ever had get away because I had given up. I don’t wear defeat well, so I made a change.

We moved to a new barn, established a routine and I faced my fears. Day in and day out, I watched my horse change. He came out of his shell, he started meeting me at the fence, he started enjoying my company and really trying under saddle. Days, weeks and months went by and progress came slowly at first, and then all at once.

But there was one thing I still wasn’t facing. My fear of taking him off the property, of doing something with him, of actually showing, still ate away at me. What if he reverted back to his old ways? What if I lost my horse again? What if I wasn’t good enough?

Why I decided to enter him, I couldn’t tell you. I didn’t let myself think about it. Why I actually went through with it, I have no clue. But what I do know is walking away with a happy horse and a successful test is slowly sparking a fire within me. A fire to face my fears, to silence the doubt inside me and to relentlessly chase my dreams.

So, here we go. You have no idea what you’ve started, Lou.