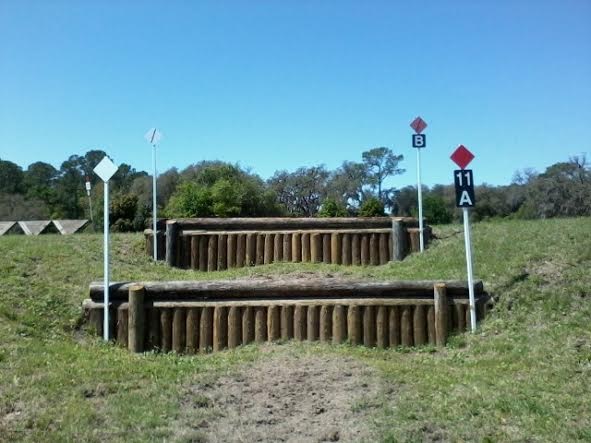 It was a soggy, sunny weekend at Rocking Horse’s March horse trial.  Saturday saw massive storms move through around lunch time, forcing the cancellation of the remaining show jumping, cross-country, and a 3-hour delay on dressage.  Novice, beginner novice, and tadpole divisions were reduced to a combined test and many competitors just went home, unwilling to sit through hours of rain, lightning and swampy conditions just to ride a dressage test later that day.  Can’t say I blame them!

Hats off to the organizers, officials, and volunteers who pulled together to save the event as best they could.  Once the storms passed, the sun actually came out and we were able to splash through our dressage tests.  There was much confusion in warm up, as no one knew who had scratched and ride times were up in the air, but everyone did their best.  My horse had some nice moments in his test, and conquered some movements he found challenging, but I know we could have had a few points more in places, too. Isn’t that always the way… walking out at A with the “IF ONLY…!” feeling.  After sixteen years in this sport, I still long to walk out on a long rein someday feeling like my horse and I absolutely nailed it from start to finish.  Maybe next time. The test wasn’t too bad, though, earning a very respectable score in the low thirties.  I’ll take it!

Sunday was a long day, but the weather was beautiful.  We ran cross-country early in the morning, and sat around for six hours until show jumping in late afternoon.  Cross-country went well; there were four combinations on course which I felt were relatively challenging for the level.  Bounce steps at Training?  A bench, turning five strides to a corner (numbered A-B)?  A half-coffin is normal…but set at one stride, with terrain?  My horse is experienced at the level, and nearly ready to move up, so I was okay.  But what about the first-time Training level horse?  I cannot imagine doing my horse’s first Training and seeing bounce steps on course…I normally wouldn’t school that question until approaching Preliminary.  Talk about unprepared!  [Side note: The USEA “suggests” that steps at Training level be one-stride or more] Nonetheless, it was an inviting set of bounce banks, and it caused no problems that I’m aware of, and there was an alternate option for “B” if your horse went up A and had a stop.  However, you *had* to attempt the direct route to accomplish A, there was no possibility of avoiding the bounce bank altogether.

Show jumping was a smooth, flowing, friendly course. Rails were uncommon, and the two-stride to two-stride triple rode well for Preliminary.  It was reduced to a double for Training, and we had the addition of a liverpool (and option) for the final fence on course.  My horse had a couple strong moments, but I was able to make him wait when necessary.  He jumped clear and finished on his dressage score.  All in all, it was a very good weekend and I’m contemplating moving my horse up to Preliminary soon.