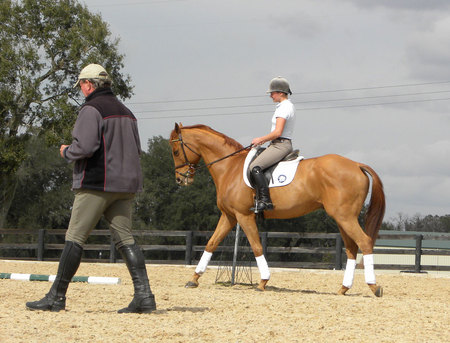 This is Hannah Burnett coming to you poolside from David and Karen’s house–Lauren and I are having a little after work snack O’Connor style (cheese and crackers) and stealing some internet. Just don’t tell them cause they’re out golfing 😉

The past couple weeks have been a very good prep for the CIC** at Red Hills. We had a flat and jumping lesson Captain Phillips last weekend and he seemed happy with our progress on the flat. We worked on Nike’s flying changes, which are difficult for him, and Mark was a great help. He told me that I have to get enough collection with uphill balance before I can have good, clean changes. The first day was a bit dicey because Nike got a bit hot with so much pressure on the collected canter but the following day it seemed that he had been practicing all night in his field or something! His changes were much better and he wasn’t rattled by all of the intense collection. We also jumped a bit the second day–which went pretty well. Mark had me keeping his canter energized and uphill around turns where I tend get slow to try to see a distance and then fire at the fence instead of keeping a steady rhythm. All in all, a very good couple of days.
Max, Karen, David and I headed off to Red Hills with only 3 horses on Thursday after having help on the flat with David. Friday started out with a very “energized” ride around the trade fair and the dressage arenas, trying to settle Nike and get him used to all of the commotion so he could focus on his work. That ride was followed by 3 other rides that eventually settled him. Our test was at 11:50 so I was pretty busy getting all of his “energy” out!! Nike was a very good boy in his test and put him in the lead after the dressage. Its very nice when your horse pulls it together in front of a big crowd and Nike loves showing off for his dad–Dick Thompson :).
The cross country was more open and gallopy than usual for Red Hills, but it was still very turny and there was alot to do. Nike was very good and pretty fast, but the last minute or two I was making him listen a bit more and add a stride instead of going for the direct quick route. It’s more important to me to have my horse listening to me on the landing and looking at the angles/skinnies/corners rather than being quick and just getting it done–especially when he’s moving up to advanced at the next event. There’s a time to “just get it done” but I want to make sure he’s prepared for the move-up. We were around 30 seconds slow but that kept us in the lead since no one made time. I did have Michael Pollard breathing down my neck going into the show jumping–less than 4 points behind me.
We waited all day to show jump and I was really feeling the pressure. I wanted to jump clear–even if I hadn’t been in first. I needed to school my horse in an electric atmosphere and try to keep him listening and rideable under pressure. I also had my infamous crashing through the last fence at Fair Hill running through the back of my mind–something that wasn’t very helpful or positive. Nike was pretty wound up and we ended up having a vertical on the out of a 5 stride down because he inverted when I went to steady him. We finished in 2nd and I’m very happy with the result. The next two weeks I will work on all of my horses jumping smaller fences quitely, landing and turning or halting etc. I learned that my horses must be available to me on the take-off landing and everywhere in-between. It’s the simple training that I sometimes glance over and I had a nice wake-up-call to that last weekend.
Nike, 2 training horses and I are headed to Southern Pines II for Nike’s advanced debut. Until then I’ll be working on the basics!! I’ll check in with ya after that 🙂 -HSB