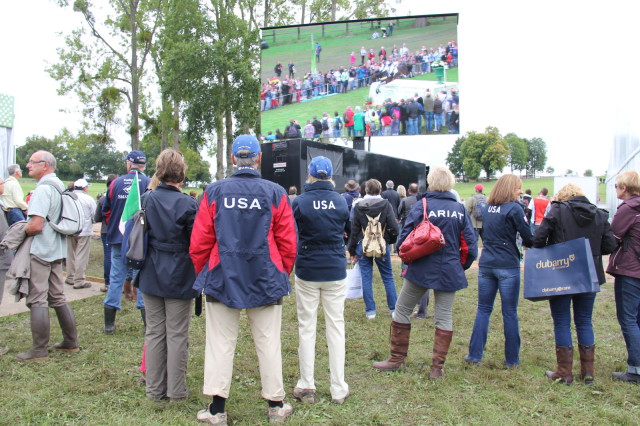 What could have been ... Photo by Leslie Wylie.

Here’s what would have happened today in a perfect world: Canada jumps clear rounds, while Ireland pulls enough rails to give the Cannucks a sixth-place team finish — and an automatic ticket to the 2016 Olympic Games in Rio. But that’s not the way the day played out, and with Team USA not completing a team after Badminton 2.0 took its toll yesterday, the stage is set for a battle between the U.S. and Canada at next year’s Pan American Games in Toronto, with the victor winning a one-way ticket to Brazil.

So where exactly did things go wrong for our North American teams? Team USA had first draw for the umpteenth time — it also happened at the 2012 London Olympics and the Nations Cup at Aachen last year, where things didn’t quite go our way — and Buck Davidson and Ballynoe Castle RM retired as the first pair out on course, with Phillip Dutton and Trading Aces following suit as the second pair out of the start box. And things continued to unravel from there.

But U.S. coach David O’Connor said this afternoon that he’s not giving up on his program. “The riders really believe in the program. They’re all positive about what we’re doing as a program. The owners have come up to me, and they’re still very much backing it. That part is good. It’s the start. We will grow; we will get better. We will bring back medals in the future.”

As for his past success with the Canadians, who brought home a team silver medal at the 2010 WEG in Lexington under his coaching, David pointed out that success didn’t come overnight. “It was a four-year program before that team really started to hit, and then it was successful. Everyone remembers that, but they don’t remember the four years it took us to get there. So that will be the same thing that will happen here; no one will remember this in a couple years when this thing really does take ahold. And I know it’s going to, and suddenly we’re going to be an overnight success.”

So how do we get there? “We need more horses, there’s no question. The type of horse — it takes a lot of Thoroughbred (blood) to truly be competitive. That is an important part of where we have to look and be strategic, and I think the (Event Owners) Task Force is really behind us. The owners who have been here are really behind us.”

In the meantime — while Team USA works on building an equine empire to rival that of the Germans — the U.S. has to qualify for the Olympics by winning the Pan Ams. Usually an opportunity to give promising two-star horses and up-and-coming riders exposure to a championship event, we’ll be sending our top horses and riders instead.

“We’ll take some very experienced people and go there,” David said. “We have to; we have to go there and go full on.” Another option is to qualify through individual spots based on FEI rider rankings, but David made it clear that Plan A is to qualify at the Pan Ams.

Unfortunately, only one team can qualify for the Olympics through the Pan Ams, so if the U.S. wins gold in Toronto — or vice versa, and Canada takes top honors — one of our North American teams will be out of luck, forced to go the individual rankings route to get to Rio. It’s not an ideal scenario by any means, and it makes these final results a little more difficult to swallow.