Longtime judge and announcer Jay Arend recently attended Stanton Farms Horse Trials in Deary, Idaho, and Spokane Sport Horse Farm Horse Trials in Spokane, Washington, for the first time. After seeing these two events firsthand, he's recommending that all northwest eventers add them to their bucket list. Many thanks to Jay for writing, and thanks for reading! 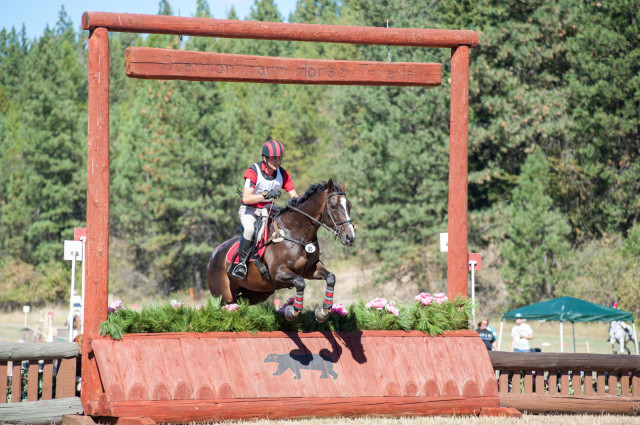 One of the many beautiful fences on Steve Buckman's cross country course at Stanton Farm Horse Trials. Photo courtesy of Heartsandhorseshoes.

Back in August I received a phone call from Sarah Stanton of the Stanton Farms Horse Trials in Deary, Idaho, about my availability to announce her event in September. My good friend and fabulous announcer Boyd Levet informed her that he would be unable to fulfill his duties for this year due to surgery that he had scheduled. We all hope that went well and Boyd is on his way to a full recovery.

Once I heard the situation direct from Boyd, I accepted the assignment, informing him that I would keep the microphone on and warm for him until he could get back. Over the years I have judged and or announced many of the horse trials in the Pacific Northwest, but this is one I was always curious about.

Where in the heck is Deary, Idaho? Believe it or not, it isn’t far from Pullman, Washington, which is where Washington State University is located. I traveled over from my home outside of Seattle the day before their two-day horse trials started. Once there, I could not believe the absolute beauty of this piece of property. If this isn’t eventer’s heaven, then I don’t know where it is. 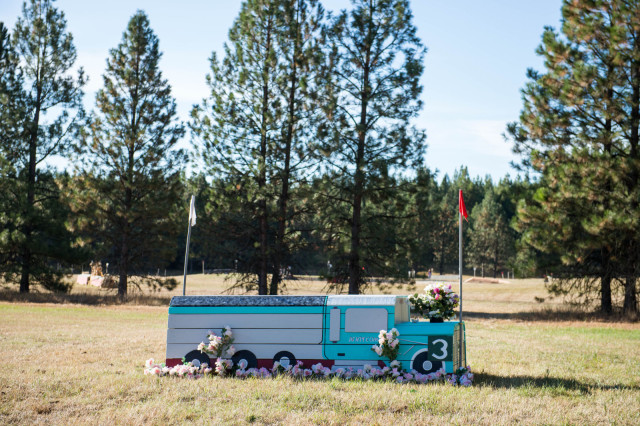 My good friend of 45 years Tom Ordway, a longtime and well respected USEF/USEA technical delegate, met me out on the cross country course. Tom said he wanted to show me the course, so we hopped into his Subaru Outback and headed to the start line. Things start out rather normal in an open valley, and then off we headed into the woods.

After some fences we headed up this grade for maybe an eighth of a mile that had a somewhat severe slope to it. You will definitely find out how fit you and your horse are galloping up it. That leads you to the upper section of the course, which contains all sorts of great bowls of meadows with ups and downs and jumps intermingled throughout.

Eventually it was time to come down to earth with a tricky drop jump as we headed back into the woods and downhill searching for the finish line. When we finally made it back to where we started, I looked at Tom and said that in my 62 years of life I have never seen anything as special as this piece of property for a cross country course. He nodded to me and said, “Right?”

At the finish line was another colleague, Steve Buckman from British Columbia, who is the course designer and main builder of this gem. When I was done explaining to him how fabulous this place was, he said that the current course is just the tip of the iceberg, as the Stantons have much more property to expand on to and develop the cross country course as well as the rest of the event. I know one thing, if I was an eventer this place has to be on your bucket list so at least you can say, “I made it around this cross country course.” 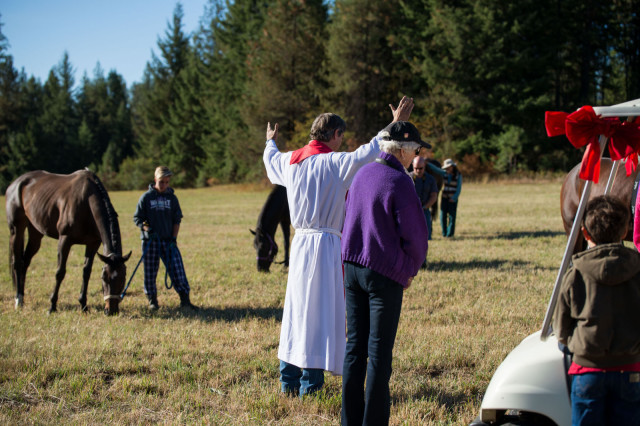 Murray Stanton leads a Blessing of the Horses before the horse trials. Photo courtesy of Heartsandhorseshoes.

The Stantons are gracious hard working hosts. Murray wears many hats, one of which is the pastor of a local church. He leads a Blessing of the Horses before the start of the festivities and held a Sunday morning service before the show jumping phase. I am not a religious person, but I can say he is one cool cat. Sarah is everywhere making sure that everything is in top shelf order for both the horses and exhibitors.

The dressage rings and show jumping arena are scheduled for a resurfacing of the same new footing that they installed in what may be the largest schooling area I have ever seen. The best news is that a date opened in mid-August, so plans are to move to a three-day schedule, which should allow for them to accept more entries. I cannot say enough good things about this place. It is truly magical!

Also added to the fall list for northwest eventers was the new kid on the block, the Spokane Sport Horse Farm Horse Trials in early October. I was invited by host Christel Carlson to announce their fall two-day day event. Christel is a respected local doctor, well known decorated dressage rider and judge who owns the farm, which is managed by the more than capable Gail Mackie. 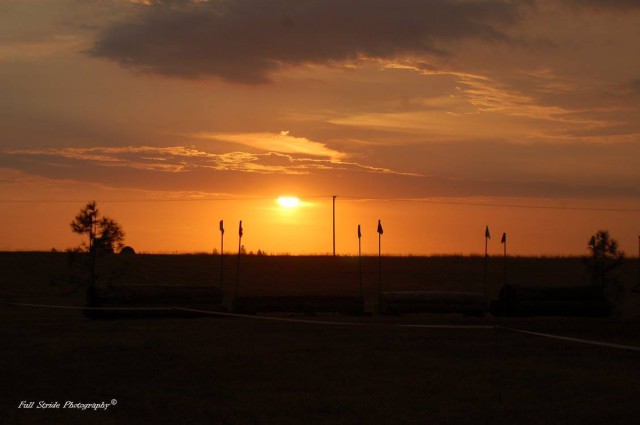 The Spokane Sport Horse Farm Horse Trials are held on another beautiful piece of land in the northwest. Photo courtesy of Full Stride Photography.

Here is another pristine equine facility.  A monster sized indoor arena as well as two outdoor arenas anchor the farm, acting as dressage arenas for day one. Don’t forget about their beautiful cross country course, as it is another fine one as well. Nice elevation changes and long gallops between obstacles make it a very fun run. Top quality show jumping equipment added to the quality of the weekend for the exhibitors.

It is so nice to have eventing back in the Spokane area after a long hiatus due to the untimely passing of Spokane eventing staple Cindy Burge. Cindy ran her superb event, the Deep Creek Horse Trials, for years in the Spokane West Highlands. I think we are back in good hands with Christel at the helm. Plans are for two events a year starting in 2016 at this lovely place, one in May and the other in early October. More permanent stabling for exhibitors is also scheduled for the future.

I was very happy for Christel and her team in that her inaugural event was so well attended. No doubt that it will get bigger and better as she produces more and more of these. I am confident that Cindy is watching from above nodding with approval.

For those of you that already attend the many great events that we  have in the Pacific Northwest, you need to add these two to your must-compete list. Even if you are new to the sport and live either east or west of the Cascade Mountains, these two are no-brainers. I promise you will not be disappointed.