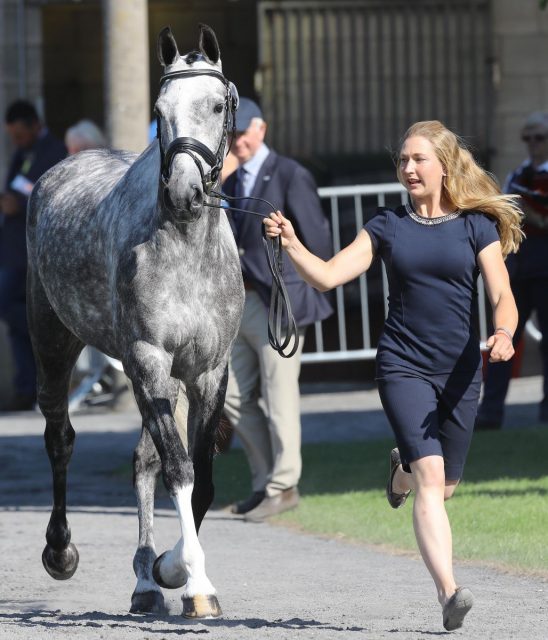 The Tattersalls International Horse Trials & Country Fair officially kicked off today in Co Meath, Ireland, and we have an exciting week ahead as some of the world’s top combinations make their case for selection ahead of the 2018 World Equestrian Games.

Sam Watson of EquiRatings declared the entries in The Irish Field CCI3* and George Mernagh Memorial CIC3* the hottest we have ever seen at this event, and we are delighted to have a strong contingent representing North America.

Will Coleman and OBOS O’Reilly are flying the flag for the U.S. in the CCI3*. “Oboe,” a 15-year-old Irish Sport Horse (OBOS Quality X Omard Clover Queen, by Clover Hill) owned by the Four Star Eventing Group, is re-routing to Tattersalls from Badminton after an uncharacteristic early runout at The Lake.

When he is on form, this horse is a cross country machine. Oboe has made the time at Kentucky, Luhmühlen and Blenheim, and we expect him to catch the time on Ian Stark’s course come Saturday. Here’s where it gets exciting: Oboe delivered a cracking dressage test at Badminton for a personal best of 24.6. If he can replicate that performance again in the first phase, he’s in with a strong shout for a top finish.

Ryan Wood may be an Aussie, but of course we’ll still claim him as an honorary American considering he is based in the eventing mecca that is Cochranville, Pennsylvania. We are delighted for Ryan to be competing in Europe for the first time at Tattersalls, and he brings forward a strong contender for the CCI3* in Curran Simpson’s Woodstock Bennett.

“Bennett,” an 11-year-old Irish Sport Horse (Shannondale Sarco X Ponail Belle, by Beau Royale), is no stranger to the level, having won his CCI3* debut at Bromont in 2016. Following a period of time off for injury, Bennett is back with a bang in 2018.

Tiana Coudray and Under the Clocks are representing the U.S. in the CIC3*, and this is another exciting pair to watch thanks to their speed on cross country. In his two runs with Tiana at this level, “Ninja,” a 16-year-old Thoroughbred (Woodborough X Regal Kate) owned by Jatial Ltd., was one of only a handful of horses to catch the time at Bramham and Barbury to secure top-10 finishes last year.

Tiana also has a horse in the Eventing Ireland CCI2* in Cancaras Girl, an 8-year-old Holsteiner mare (Cancara X Rubina VI, by Narew) she owns with Diana Chappell. Her third and final mount at Tattersalls is Happenstance, her own and Kyrle Arscott’s 6-year-old Irish Sport Horse by Quality Time, in the Cooley Farm CCIYH1*. The mare scored 29.9 to sit in 14th place after the first day of dressage.

We also have two to cheer for in the CCI1*. Kelly McCarthy-Maine is the sole rider representing Canada at Tattersalls, riding her own Puissance Skys in the Land Rover CCI1*. The 13-year-old mare (Puissance X Skies of Blue, by Horos) scored 29.4 to sit eighth after the first day of dressage.

CCI3* dressage kicks off tomorrow at 9 a.m. local time/4 a.m. EST, with the CIC3* going on Friday. Tattersalls is live streaming wall-to-wall coverage of the three-star classes, so be sure to tune in live. Dressage ride times for pairs that will be shown on the live stream are as follows:

Keep it locked on EN for full coverage from Tatts. Click here to access start times and results for all divisions. We are delighted to have beautiful photos to share with you courtesy of official show photographer Louise O’Brien. Go Eventing.