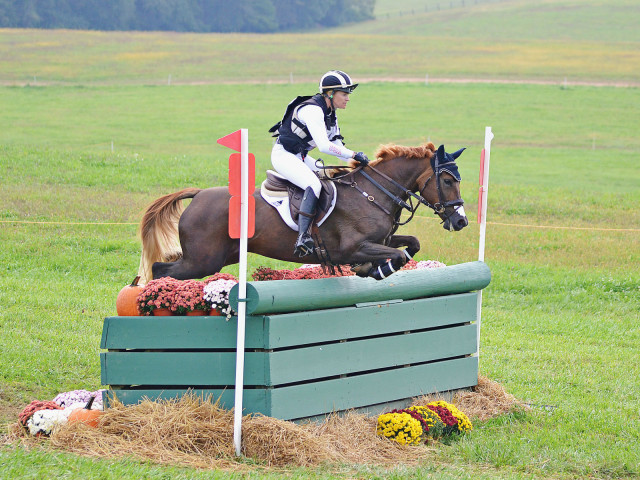 Super pony Forrest Nymph has come a long way since we featured her in EN’s Got Talent in January 2013. Since then, her owner Beth Davidson placed an ad on Sport Horse Nation looking for an upper-level rider to take on “Farrah” to see just how far she could go, and Sinead Halpin ultimately ended up taking over the ride this past October.

Farrah did her first Intermediate at MCTA in May, and she achieved another milestone this past weekend, completing her first CIC2* at Plantation Field International Horse Trials, finishing 18th on a score of 57.8 in a big 80-horse division. The little 14.2-hand New Forest Pony mare’s fan club continues to grow — she even has her own Facebook page now!

“She’s pretty amazing, and I have no idea how she does what she does, but I’m not going to argue with her,” Sinead said. “She’s a phenomenal jumper, and I personally have gotten more comfortable jumping her. The first time I rode her, I kept thinking about Karen (O’Connor) jumping around Rolex with Teddy. You are looking up at the fences at that height.”

Sinead said it took awhile for her to get really comfortable jumping her in part because Farrah had a redheaded pony attitude toward the fences. “When you get a new horse and you’re moving up a level, you just don’t know how it will go, but she’s gotten more rideable now, maybe because she trusts me more,” she said.

“She used to bolt to and away from the fences, but she’s backed off more now. She’s very brave and incredibly sensible when it comes to her self preservation, so you’re as comfortable on her as you would be on any of the bigger horses,” Sinead said.

The dressage has also presented its own challenges, in part because it took Sinead awhile to figure out exactly what Farrah needed to succeed in this phase. “She’s a red pony mare, so you have to subtly pick your battles. She had been ridden in stronger bits in the past, and I ended up going back to a broken happy mouth; she softened a lot, and it made a big difference.”

Getting her fit enough to hold the movements required at the Intermediate and two-star level has also been a big piece of the puzzle. “Teddy was quite thick, and she’s really narrow and very little. It takes a couple years to really develop a top line, and I have to be careful not to do too much with her in the meantime.”

At Plantation Field, Sinead warmed up before dressage for five minutes, ran through her dressage test, and then got back off for 15 minutes. She got on again right before the test, went into the ring and scored 49.0, which put them in a three-way tie for 14th place.

“She’s also very opinionated, and you can very quickly cross that line where she gets irritated and aggravated on the flat,” Sinead said. “It’s all about keeping her comfortable and keeping her working on your side.”

With Farrah becoming more rideable in both dressage and over fences, the future is suddenly looking very bright indeed after her very competitive performance at Plantation Field. Now Sinead and Farrah look ahead to the Dutta Corp Fair Hill International for the mare’s first CCI2*.

Farrah proved she can go fast this past weekend, jumping clear over Tremaine Cooper’s CCI2* course with just 4.8 time penalties, and Sinead said she will continue working on the fitness with Fair Hill in mind.

“She’d never competed outside of Florida before this season, so I’m going to gallop her on a good hill before Fair Hill so she feels good at 9 minutes,” Sinead said. “She’s so scopey, but she’s a little horse, so you don’t want her to get tired.”

We’ll be cheering Sinead and Farrah on at Fair Hill. And for those of you wanting to go along for the ride, syndicate shares are still available. You can contact Sinead at [email protected] for more information. And check out video of their cross-country trip below courtesy of EN’s good friend Thehorsepesterer: