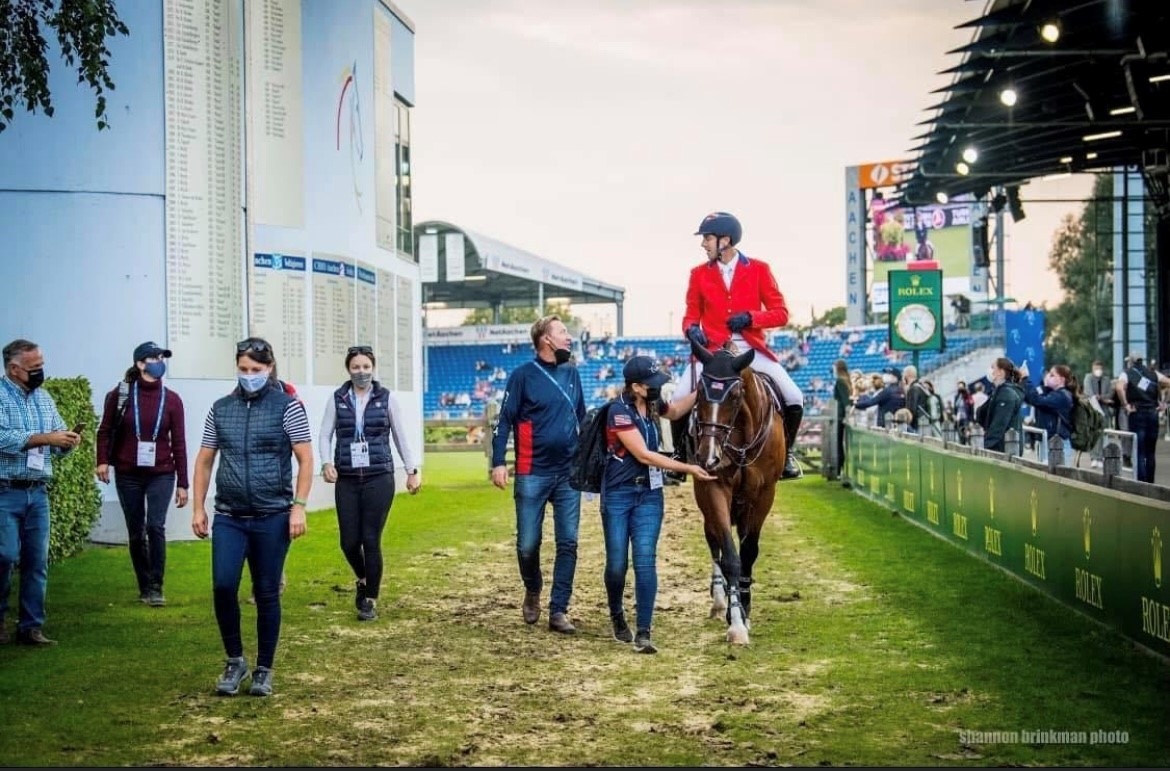 Hailey and the team. Photo courtesy of Shannon Brinkman.

Hailey Burlock went from helping her cousins with barn chores as a kid to grooming for Will and Katie Coleman– and I had the pleasure of getting to talk with her about that journey.

Hailey grew up in Fredericton, New Brunswick and her involvement with horses began as a kid by lending a helping hand at her cousins’ draft horse barn on the weekends. As she grew older, she started taking weekly lessons with Zoe Erichsen-Meesters, and eventually leased “Fantasia,” a horse that was shortlisted for the 2008 Olympics.

“I was so lucky to be able to ride and compete a horse like that. She was amazing and we shared a special bond, as well as an exact same birth date,” Hailey said. “Fantasia” got Hailey hooked on the sport of eventing and began her appreciation for and dedication to horses as high-performing athletes.

As an integral part of the WCE team, Hailey’s work behind the scenes is a major help to the team’s consistent international success.

While this respect for the horses and the sport would eventually be her career choice, Hailey studied forestry at the Maritime College of Forest Technology.

“It wasn’t always clear that a chance to work with horses was a viable option for me, but I was always really interested in just being outside and working outside,” she said. “Studying forestry and going down the path towards becoming a park ranger was really formative for establishing myself as an independent, self-motivated individual.”

Hailey’s chance to work with horses on a daily basis arrived partly by chance. Growing up in Eastern Canada, she had ridden in several clinics with Rob Stevenson, the Chef d’Equipe for the Canadian Olympic Team. After crossing paths with him later, he offered her a job running his barn in St. John, New Brunswick. She worked with him for about two years and groomed at international competitions like Bromont and Foshay International. 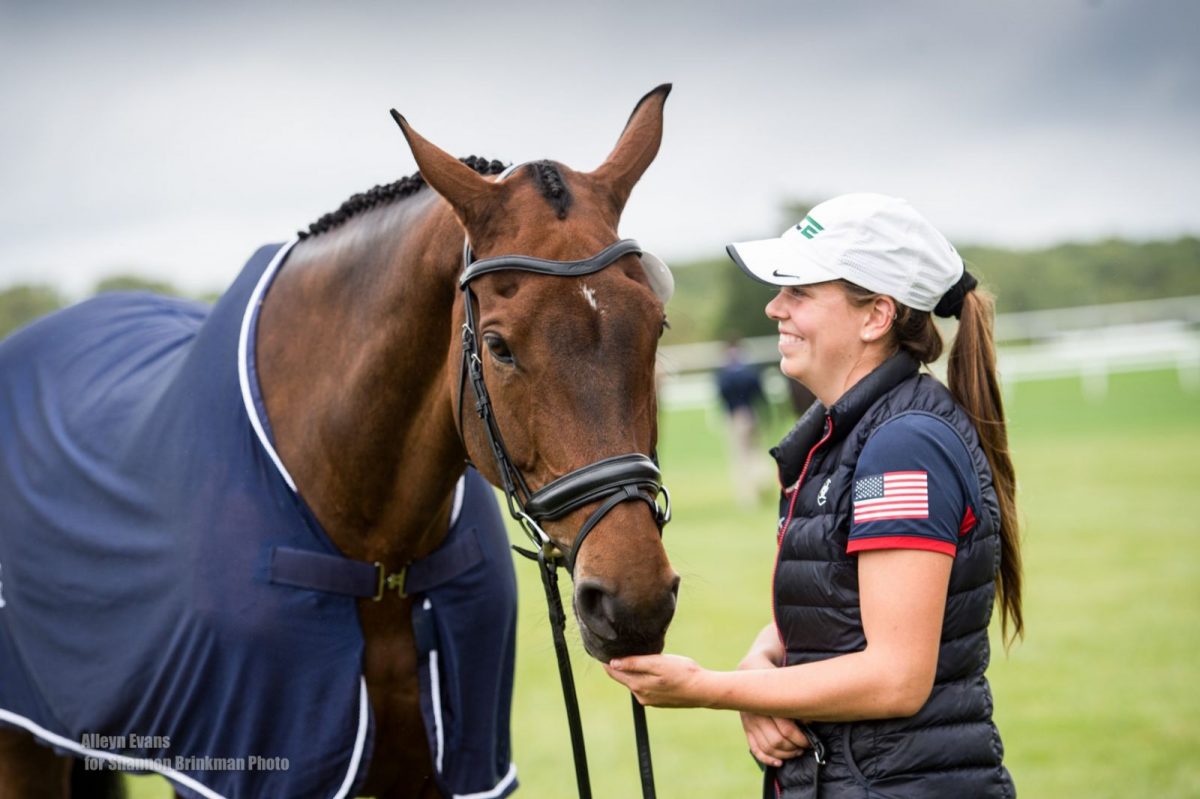 “It gave me a taste for running a barn and maintaining a standard of horse care that I could really embrace,” Hailey said.

Hailey soon found herself back at school, but within six months, she was itching for another opportunity in the horse world. “I just missed horses, and I missed working with them. The classroom all of a sudden seemed very boring and unfulfilling, and I began desperately looking for opportunities as a groom,” she said.

“Traveling from New Brunswick to Ocala is an exhausting, nearly 24 hour journey. When Hailey arrived at the farm, it was at the end of the day and the girls were sweeping and finishing up the barn. Hailey had probably not slept in a day, but without saying a word, she just instantly grabbed a broom and started sweeping alongside them. I remember so distinctly saying to myself, ‘I like this girl.’ She has an unbelievable motor, and a work ethic that is second to none. She leads by example, and that’s what we admire most in her,” Katie said.

Grooming is not an easy job, and people are often shocked by the time commitment it requires. “It’s an all-consuming job and lifestyle,” Hailey said. “People don’t realize all that goes into it, but I love all that.”

Top eventing and equestrian programs around the world are like Formula One teams, and grooms are the epicenter of maintaining and optimizing these incredible equine athletes that are part of top equestrian programs. They communicate with vets, farriers, coaches, and their riders in ways that require them to be very knowledgeable about all of these various fields.

“There are no medals or major performance goals reached without a truly world-class groom in the barn, and Hailey has become that person for us,” Katie said.

In almost two years of working with Katie and Will, Hailey has seen firsthand that the number one priority for WCE is the horses and their care, and she has embraced that approach. 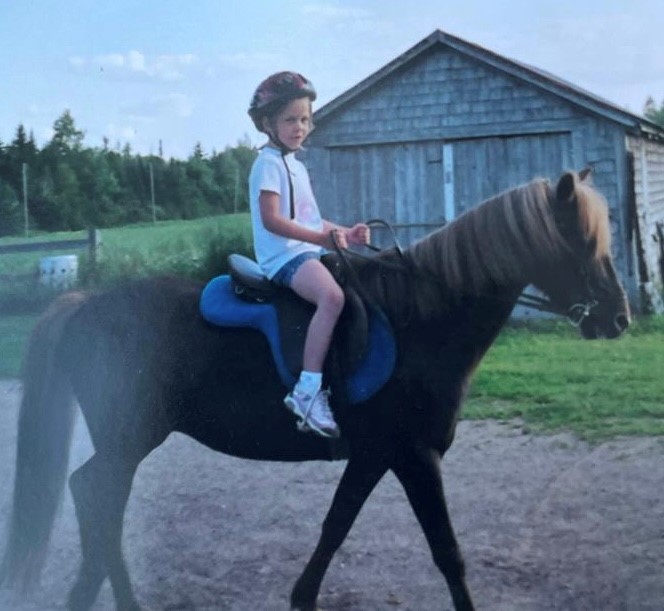 “Everything is meticulously well thought out, and there’s a reason why we do everything. Will and Katie hold everyone to a very high standard. Their expectations are that the whole team is constantly striving to get better in the way that we manage and support the horses in fulfilling their potential, and I think that’s what makes us a successful program,” Hailey said.

WCE’s success in 2021—which include multiple internation wins, a top five finish at the Maryland 5*, a reserve horse for the Tokyo Olympics, and the first American winner of Aachen CHIO 4*– can be attributed in part to the team behind the scenes.

“Success for our program — the rider is just the cover,” Will Coleman he told EN after a recent win at Stable View. “It is as much about everybody else: my coaches, my wife, my family, our girls home at the barn, the team behind us, vets, farriers. It’s really a victory for all of them, I’m just the cover of the book, but they’re the ones making up the full story.”

Aachen winner Off The Record and recent Carolina 4*-S winner Dondante are Hailey’s top two favorites at the barn – credits to their vibrant personalities for being so high up on the list! Just don’t tell the other horses…Hailey can’t play favorites, “I love them all to be honest.”

Since Will and Katie are based out of Ocala during the winter and Gordonsville, Virginia the rest of the year, it is difficult for Hailey to see her family in Canada. “I feel very fortunate that Will and Katie treat us like family – that certainly helps with being away from home for extended periods of time.”

But despite the long hours and hard work, Hailey says, “I love all of those ins and outs. Those small details and extra efforts are really what makes our successes so rewarding.”

Hailey is thankful for the support and opportunities that Will and Katie have given her and looks forward to another exciting year in 2022. With three horses aiming to contest the Land Rover Kentucky 5*, another trip to Aachen CHIO and their sights ultimately set on representing the U.S. at the FEI World Championships for Eventing in Pratoni, Italy this fall, it will be another busy and exciting year of competition for Hailey and the Will Coleman Equestrian team.