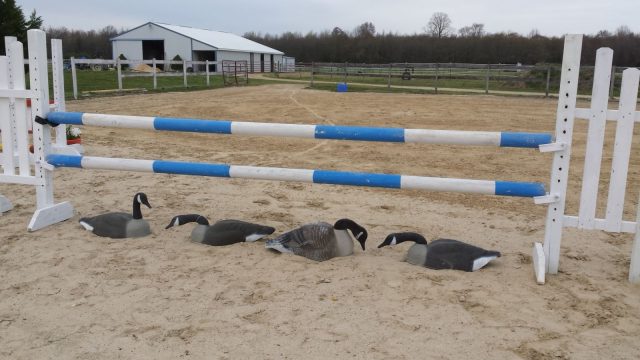 Everybody’s got jumps — but are you taking care of them correctly?

Sounds crazy, because jumps take a beating on a daily basis in most event barns, but there are some things you can do to help keep your jump course alive and well for years of use.

To begin with, most barns that have a great set of jumps start with high quality obstacles. It doesn’t matter if you get a nice set of wooden jumps or vinyl, if they are well made and properly constructed of good materials, they should last if you are careful how you treat them.

For wooden jumps, in the east, it’s usually a good idea to look for pressure-treated wood components that touch the ground. They tend to last a bit longer and are more resistant to moisture and subsequent rot. But eventually everything gets some disintegration going, especially if they are outside or stored with ground contact.

When standards get loose feet, they are even more subject to damage; so when your standards start to become wobbly, it’s best to get them repaired or replaced. When a standard does not hold a rail securely, your horse doesn’t get a fair shake at making a proper effort over the jump; a tippy standard can come down with just a light tap, taking with it any other components of the jump and causing an unneeded crash.

With the price of lumber skyrocketing, it’s probably a good idea to make sure your wooden jumps are carefully stored for the winter if they are not being used. If you can put them inside — great. If there’s no storage indoors, they will keep alright outside, but the key is to get them off the ground, by putting some scrap lumber underneath of your stack, or some pallets. Then cover them securely. In most climates this will be okay for a few cold months.

If you bring your outside jumps into the indoor for the winter, now’s the time to check over all of the joints, the feet of the standards, check for splinters and cracks on the rails, etc. Your friend is some Number 50 coarse grit sand paper to smooth the chips and splinters, and a cordless drill with some wood screws in 4-inch or longer length.

To help loose feet stay tighter, you can place a few screws in your feet to hold them until you can get them repaired or replaced, but new screws won’t hold old, rotten wood.  Make certain you are screwing from good wood into good wood; if any part of the sharp end of the screw is visible, back it out and reset it to avoid it cutting someone’s hand when they pick it up.

Winter isn’t really the time to repaint — and here’s why. Most good quality exterior paint has temperature parameters. Any colder than the recommended temperature, and the paint just won’t seal, and it is hard to get it to dry evenly, too. So wait for warmer temperatures for painting — if you have peeling paint and really want to see fresh paint on your jumps, you can sand them a bit to smooth out the surface until you get a warm enough day.

Things that are split or broken shouldn’t be used, and you’re smart to replace them or set them outside the ring, so a horse isn’t injured on them. Especially in a smaller indoor arena, there is usually less space to avoid a jump if a horse is wrong to it. Be careful that things are safely set so there is room for a horse to go past without getting caught on a cup edge or standard foot. This isn’t always possible but some trainers use their shortest rails to keep the jump widths small and then they fit better in the arena.

If there is one thing that really wrecks a set of jumps, it’s dragging them — anywhere. Always try to carry your standards when you move them, rather than drag them, even if it’s just a couple of feet.  Yes, this is often hard to do, but it will save your investment!

When I pick up a standard, I tip it slightly to get a hand under a foot, then swing it over and carry it off the ground with both hands near the base. Use gloves so you don’t pick up a splinter. That method works for most schooling standards (single standards) or light wing standards. If your standards are too heavy to lift, cut them down, or consider using schooling standards and not wing standards for some jumps and exercises at home. Even vinyl standards should be lifted to be moved; it’s safer for the jumps’ integrity. Jumps are heavy — lift carefully. Those of you who jump really big stuff have to use the 6-ft. standards and I feel for you!

A little side note here. If you have jumps that so heavy or large in size that you find you aren’t using them much, because they are hard to move — do something about it. Make them smaller, retrofit their size, cut them in half, or sell them to a big strong person! Your jumps need to work for you.

When you move boxes, do it with help so that each end is lifted the same and not dragged or slid over the ground. This loosens the screws in the box sides, helps the plywood to splinter away from the frame, and makes it unlevel when you place it under a jump. If you don’t have help, lift it and carefully tip it on it’s end, then bear hug it to carry it — this works with small quarter and half rounds, boxes and walls that are under about 2 feet in height. I’m a little taller than 5-ft. and I can carry many jump components like this. Bigger obstacles will need two people to carry to avoid damage. And if your stuff is too heavy to lift and move, get rid of it and get lighter things that work better for you! Life is too short! 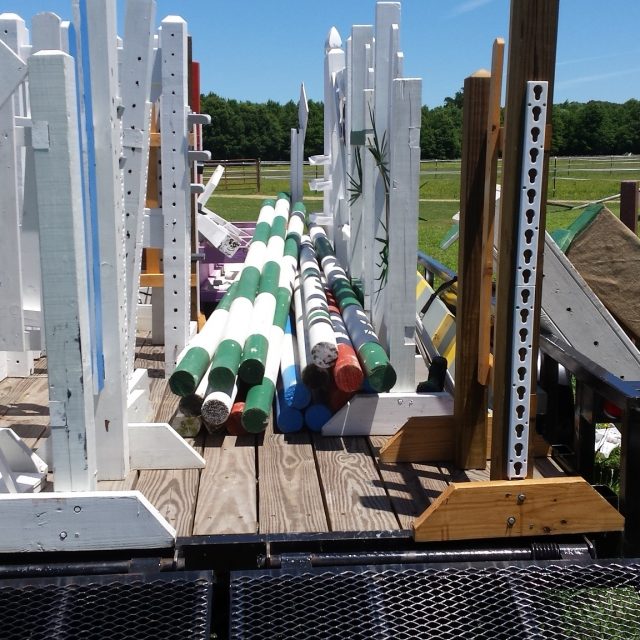 Stack jumps carefully when you move them. Photo by Holly Covey.

It’s better if you are moving walls and boxes by vehicle to turn them on their tops. It keeps the frames tighter, and if you use a moving blanket it won’t scratch the tops. When you slide a box on the open bottom, it can just cause wear and tear on the frame and screws that hold the outer to the inner. If you an aqueduct wall with an arched center, tip them on the tops while transporting. But don’t store them upside down — that allows any moisture to get inside. Instead, put them back on their feet and cover them securely.

Poles are the hardest to keep pristine, because they get so much use. They are constantly in the dirt, either as ground lines or when a jump is taken apart for flat work. I try to keep my good poles up off the ground if I am not using them, but it’s hard to do, as I’m always wanting them down for trot poles, etc. So when you know you are not going to use a pole, set it up so it’s secure and in a safe place where it won’t fall on someone, off the ground, and under cover if possible. Remove those you are not using to a safe spot outside the arena. Stepping on a hidden rail on the ground, covered with dirt or grass, has turned many an ankle!

Carry jump rails from the middle of the rail; don’t drag them and don’t try to carry too many at once (too hard on your arms!) I try not to drop poles on their ends — it can split them. I think it also goes without saying that broken or split poles should not be used; not even for a ground line! A split pole is like a spear, it’s really dangerous around the feet of a jumping horse. Instead, set them safely aside, and some day when you have the time, take out your saw and trim away the broken ends to have a good shortened “skinny” pole — usually 6-ft. is a good useful length. Sand the raw edge a little to prevent splintering and voila, you have a new skinny jump rail. Lastly, keep your poles or rails painted and sealed because they take so much abuse and are often in the dirt. I sometimes use a clear sealant over paint just to try and keep the color to last a bit longer. I repaint my rails about every two years in my climate, and my jumps are outdoors.

I remove the flowers from my boxes and the floral decorations in winter. The wind blows them around and I don’t want to chase after them. They get dusty and tired looking in an indoor if not periodically washed off and let’s face it, it’s hard to wash anything in the dead of winter. So I remove them to an empty feed sack (a bit stiffer than a plastic garbage bag and keeps the flower stems from being smushed) and store for spring. Instead, I’ll use fun things like old Christmas trees (work great for filler under jumps) which often last a few months. Or painted wooden fillers, even some large goose decoys! Anything that is safe and a bit more weather resistant, and heavy enough to withstand winter winds and precipitation.

Jumps are expensive and an important investment to your business. It makes sense to be careful how you move them and store them to keep them working for you for many years to come.